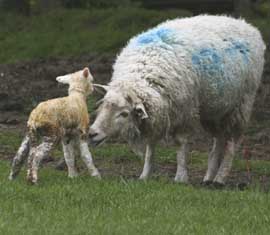 Schmallenberg virus could be widespread in Norfolk and may have gone undetected for some weeks in early-lambing flocks, according to vet Dave Feneley of Wensum Valley Vets, Fakenham.

The disease was recently detected in one of the practice’s client’s flock, with seven lambs from the small flock of 27 ewes affected in North Norfolk. In this case, animals were either stillborn, born with deformed necks and legs or large, bull-like heads.

“Schmallenberg is a potential time bomb, because the damage would have already been done in the midge season,” says Mr Feneley.

“We feel the problem could be quite widespread in the area. In hindsight, two or three producers have said they may have seen signs associated with the virus in the past two months. It’s not that they didn’t report it, but problems were in such small numbers that they appeared among the normal levels of losses.

“It is more likely farmers will see small numbers of affected stock, rather than a big incidence. It’s essential producers remain vigilant and don’t put things down to normal, acceptable losses.”

For example, a flock seeing three to four deformed lambs out of 100 ewes should think more about whether this is an issue and get lambs tested.

Mr Feneley explained that it would depend when the ewe was infected in gestation as to whether problems would be seen. “It looks like the disease is spread via midges. If a ewe was infected in the early stages of pregnancy there is more chance the lamb will be affected.

“Later lambers, which went to the tup in the period furthest away from the at-risk midge time, may not see as many problems.”

He said it may look like the disease was tailing off in later lambers, but it wouldn’t mean the problem had gone away, it would just depend on when ewes were infected.