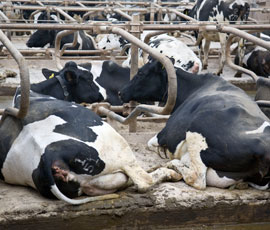 Nearly 200 cases of Schmallenberg virus in cattle have now been reported, according to new figures released by the Animal Health and Veterinary Laboratory Agency.

New data show that 193 cattle have tested positive for the disease with the worst counties affected being in the South West.

Cases in sheep have also been increasing steadily with 238 cases. Concern now looms over the effect of the disease on next year’s breeding crop.

Vet Alistair Macpherson of Shropshire Farm Vets said a number of dairy herds in his area were showing an increase in late-term abortions and sick fresh cows.

“As a result we are now testing for SBV on many of these dairies with results pending. It is most concerning that SBV has been known to cause a milk drop of up to four litres a cow on a herd basis and a 30-50% drop in individual cows. Pregnancy rates in infected herds can also decrease by as much as 75%. We await the test results with interest and more than a little trepidation,” he said.

News and background on the Schmallenberg virus