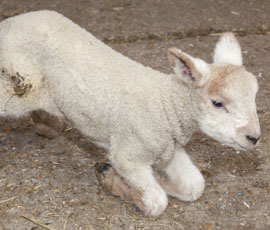 Sheep and cattle farmers are being warned Schmallenberg virus could reappear in 2013, according to a report from the European Food Safety Authority (EFSA).

The authority said farmers were unlikely to suffer further serious problems with the disease for the rest of the year.

But, the virus could return next year, with regions that have previously been unaffected at risk.

The report says: “In regions with SBV confirmed holdings, assuming a high prevalence of infection and post infection immunity, impact in the 2012-2013 calving and lambing season should be low.

“However, assuming SBV survived the winter of 2011, the models suggest that in unaffected regions or regions with low prevalence with suitable temperatures for within herd transmission by vectors and high density of susceptible species (cattle and sheep) SBV infection is likely to spread.”

EFSA said the chances of the virus surviving over the winter and then spreading in 2012 before reappearing again later in the year, or in early 2013, were difficult to assess.

If the Schmallenberg virus survives the winter, EFSA’s geographical spread model has predicted that it is most likely to re-emerge between mid-April and the end of May.

Any new outbreak is likely to be on a similar scale to the initial outbreak that occurred in 2011.

EFSA has acknowledged data from across Europe that Culicoides (biting midges) spread the Schmallenberg virus.

Scientists believe the disease, which causes birth deformities and miscarriages in farm animals, was spread to the UK by infected midges during last summer.

The Schmallenberg virus was first detected in Germany last August, and by mid-May 3,745 holdings across the EU had cases confirmed by laboratory testing.

EFSA estimates that no more than 4% of sheep holdings and 2% of cattle holdings have reported cases of the virus in these countries.

The latest figures from the Animal Health and Veterinary Laboratories Agency (AHVLA) show 267 farms in the UK have confirmed cases of Schmallenberg virus, including 45 in cattle and 219 in sheep. However, there have been no cases reported since 6 June.

A spokesman for the AHVLA said: “The AHVLA is currently working with DEFRA to agree the approach that will be taken to Schmallenberg going forward.

“In addition, AHVLA will shortly conduct a survey to enable sheep farmers to report their perceptions of Schmallenberg infection during the previous lambing season.

“This will help measure the impact this new disease has had on British farms with sheep.”

See our page for the latest information on the Schmallenberg virus.

Join in the discussion on our Schmallenberg forum.