It wasn’t only the weather that reached scorching highs on 26 May, but so too did prices at the pedigree beef sale at Carlisle with Angus bulls selling to 16,000gns and Beef Shorthorn to 8,500gns.

Top price of the day, which saw Angus, Beef Shorthorn, Salers, South Devon and Hereford stock on offer came from the dispersal of the autumn-calving portion of the Blelack Aberdeen Angus herd on behalf of Neil Massie and Sons, Aberdeenshire.

Top price in the Blelack sale at 16,000gns was 2012-born female Blelack Toplass M847 by Blelack Equity J127 and out of Blelack Toplass F552. She headed home with RJ and D Loftus of the Weeton herd, Preston Lancashire. 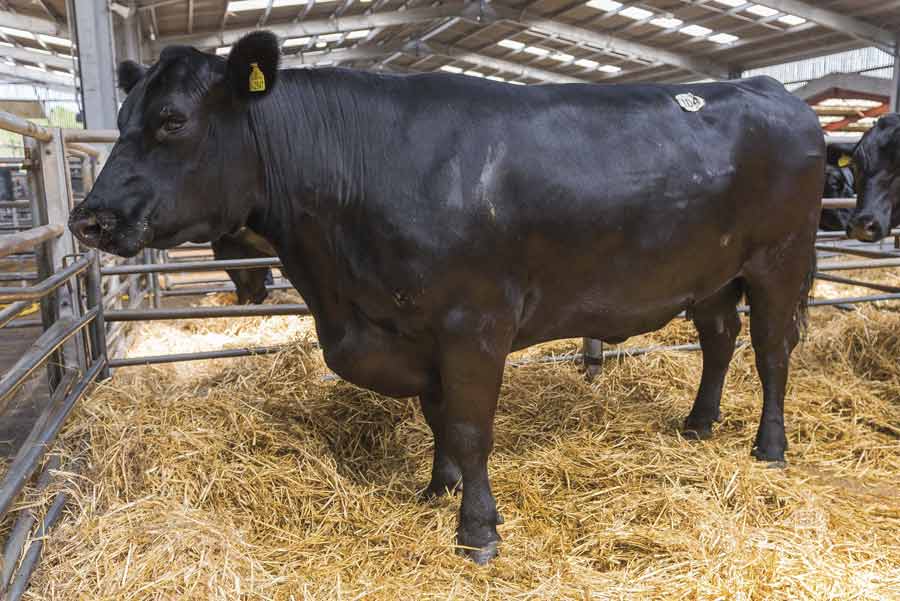 Sale leader at 16,000gns from the Blelack herd dispersal on behalf of Neil Massie and Sons was Blelack Toplass © Robert Smith

They also went on to secure Blelack Pride N114 by Carrington Park Time on B7 out of Blelack Pristine K536 for 10,000gns.

Selling at 8,000gns to S and S Medley of the Saville herd was Blelack Lylie N204 by Blelack Equity J127 out of Blelack Kutie L663. 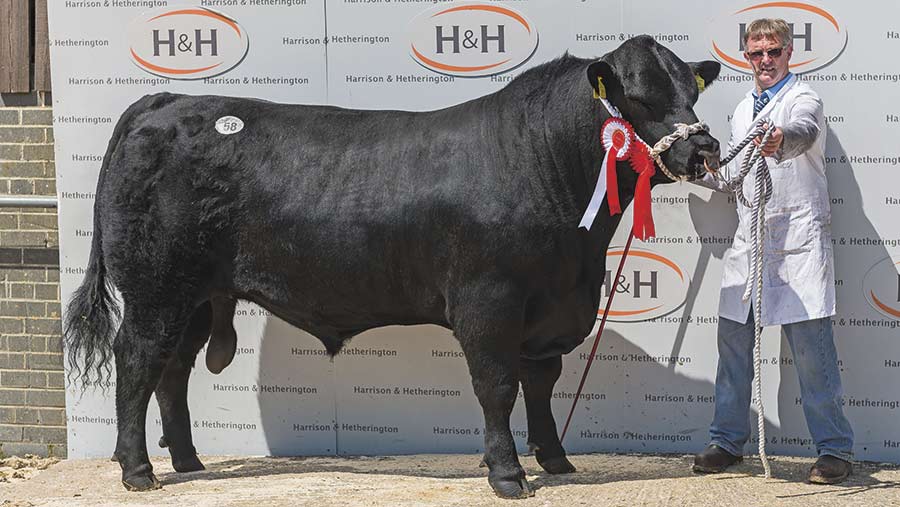 Reserve junior champion and next in the money at 7,000gns was Blelack Topclass R626 from Neil Massie and Sons of the Blelack herd. Sired by Warrenho Emperor M425 and out of Blelack Toplass M847, the female who sold for 16,000gns in the dispersal headed home with GD Herdman, Alnwick. 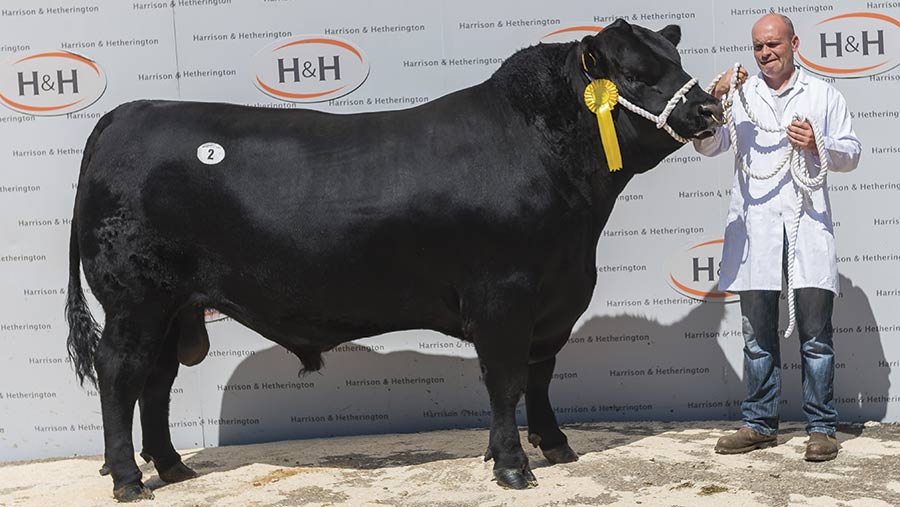 Described as being a strong bull and by Duncasnziemere Edwin J311 and out of Oak Moor Lady Issie J029 he headed home with Dustall Estate, Staffordshire.

Beef Shorthorn achieved two new centre breed records in Carlisle on 26 May at the breed society’s spring sale, when bulls sold to 8,500gns and females 6,500gns with 100% female clearance. 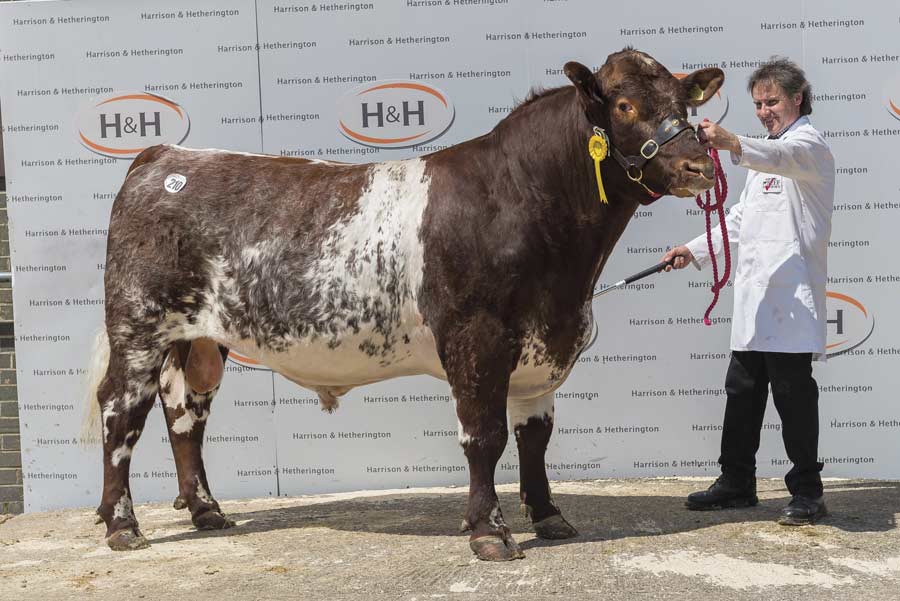 Sired by Cavans Bourbon and out of an EX90 Bilsdale bred dam he was bred and exhibited by RS and G Johnson, Huby, York. He sold to S and J Hodgson, Bradford, West Yorkshire along with four female entries.

The day’s second highest call of 7,500gns was made by D Nesbitt, Seascale, Cumbria, for the male and overall champion, Millerston Juggernaut TI +22, SRI +21, a 21-month-old dark roan within the breed’s top 15%.

Bred and exhibited by Jack P Ramsay, Mauchline, Ayrshire, he was by Meonhill Charlie Chaplin and out of a home-bred dam.

A two-year-old roan in calf to Chapelton Bonanza, she was by Blelack Masterpiece and out of an Endeavour-bred dam.

Bred and exhibited by W and J McAllister, Ballymena, County Antrim, he went to ME and TD Tailford, Riding Mill, Northumberland.

Hereford bulls topped at 3,000gns for G and MC Shepherd’s Moorside 1 No Limits. This bull, described as having plenty of length, is in the top 10% for direct calving ease and top 5% for eye muscle. By

This bull, described as having plenty of length, is in the top 10% for direct calving ease and top 5% for eye muscle. By Morrside 1 Kingston and out of Romany 1 Jane A51 he sold to S Henshaw, Haygarth, Hill Road, Dunnington, York. 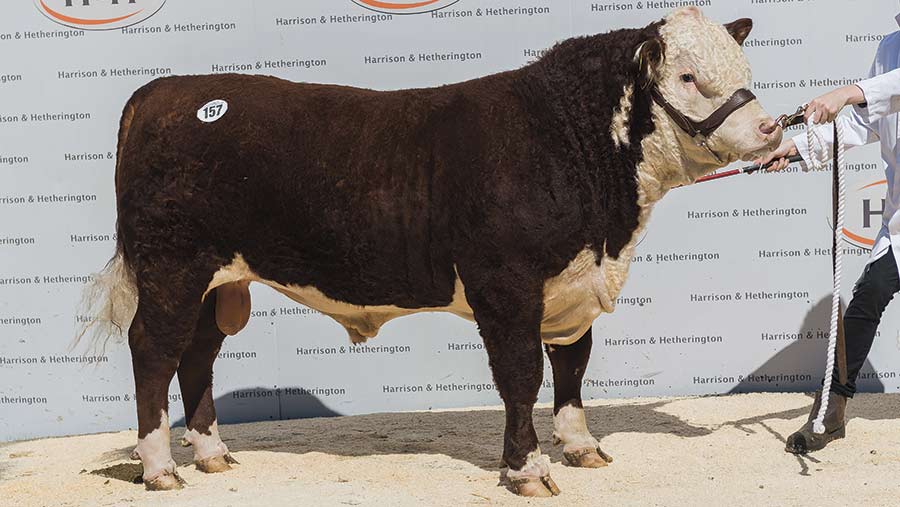 At 3,000gns was Hereford Moorside 1 No Limits from G and MC Shepherd © Robert Smith