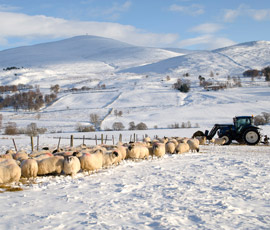 Improved returns from beef and sheep in the past three years have stemmed the dramatic haemmoraghing of livestock from Scotland’s hills and uplands, but the Scottish breeding sheep flock is now at its lowest in over a century and the most remote areas are failing to recover.

Those are the findings in Response from the Hills, the follow-up report from SAC’s landmark Retreat from the Hills in 2008, which showed the rapid decline in livestock numbers as farmers adjusted to decoupling payments and low returns from beef and sheep.

Response from the Hills indicates that at national and regional level the industry is turning a corner and many upland producers are looking to the future with greater confidence, but there is still no sign of a return to former times in many of the most disadvantaged areas in the West, where the higher, steeper hills have been abandoned.

And had it not been for the windfall gains from currency exchange rates and the weakening of sterling, the situation could have been much worse, according to the report author, SAC economist Steven Thomson, who warned of the implications of the current financial situation in Europe.

“The Eurozone crisis may lead to an income shock for farmers if sterling strengthens against the euro,” he said.