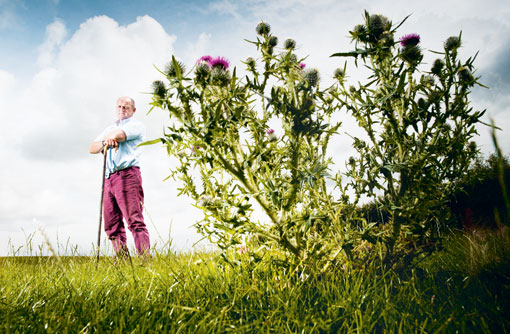 I was going to write this month without mentioning the rain but that has proved impossible. The only good thing about the weather is it’s now easy to see all the holes in the quad bike tyres – so many, in fact, that I bought some liquid gunge from Simon Jacobsen at the Highland Show and to date it has been great.

Our potatoes look like a field of chick weed; it’s so wet we can’t travel to weed them and blight control will have to go ahead using floatation tyres. The only consolation is I still have a field of potatoes; our neighbours, lying in the dyke back, are totally washed out.

Silage-making is impossible; topping thistles is full-time and not making too much mess, but – touch wood – nothing major has broken in the topper yet.

We have managed to clip more than half our sheep and the biggest day so far has been 1,800 ewes and tups, which only happened because we ended up with two gangs of shearers.

A full month later than last year we were about to start drawing fat lambs, then a polite lady phoned to say she was landing in one hour for an organic spot-inspection. Well she came and we spent an enjoyable day together going round sheep, followed by paperwork, and we reorganised to weigh fat lambs tomorrow. The first 250 lambs averaged £85 and there are plenty more ready.

I thought buying store cattle was hard work until I spent a day trying to buy bathroom suites – even the plugs are an extra.