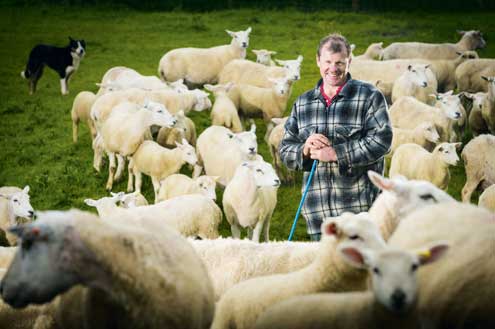 Reducing feed costs to an absolute minimum by running productive grassland systems and doing everything in their power to farm in a low-input way is a key theme linking all three of this year’s Sheep Farmer of the Year finalists.

Fifteen years ago, Northumberland farmer Duncan Nelless sat down and made a list of what he liked and disliked about farming. He then set about trying to produce a system that he would enjoy farming but would also return a profit and provide sufficient income for three families.

Today, most of the boxes on Duncan’s list are ticked and a farming system almost indistinguishable from the one he was farming 15 years ago is in place. The area farmed and flock size has doubled, with a traditional 850-ewe Mule flock producing finished terminal sire cross lambs replaced with a closed flock of pedigree Lleyns.

Facing cost pressures, the decision was also taken to convert the farm to organic in 2004. Duncan, who farms with his brother Angus, explains: “We were already trying to make the most from our grassland and reduce input costs, but the main attraction for the change was the organic conversion aid.”

Going organic has made the Nellesses think about their system more, but the conversion has certainly not impacted on production. In fact, no concentrates are fed to sheep yet growth rate to weaning on ram lambs equates to 0.29kg-0.31kg a day. Before changing their system, total concentrates amounted to 20% of variable costs.

The sheep flock is the largest business driver, offering the biggest source of income with a net margin (after non-cash costs) of £10.63 a ewe, or £15,027.64. “Fifteen years ago we had a goal to be self-sufficient and farm land without SFP and that is what we are doing,” says Duncan.

EID and good grassland management has been instrumental to their profitable system. The whole flock has been EID-tagged and performance-recorded since 2007, with the ewes split into A and B flocks to accelerate the breed development programme. The A flock comprises 1,160 Lleyn ewes which lamb outdoors and are put to carefully selected Lleyn rams. The B flock is the commercial flock and contains any ewe not meeting the criteria for the A flock. All ewes in the B flock are mated to Signet SRS performance recorded Charollais and Hampshire Down rams.

Whole flock EID has enabled selection for worm resilience, eliminated lambing assistance, improved udder conformation, increased maternal drive and reduced management issues and everything is EID-recorded at birth. The entire A flock also has an EBV running against it. Duncan says, “EID is a lot of work but it is paying off. It flags up any mistakes quickly and we are taking control of our own breeding objectives.”

Grassland management at the farm is also very strict. The flock is virtually dependant on red and white clover and the Nellesses are managing a grazing system based largely on New Zealand managed dairy systems. A lot of deferred grazing is used on the farm. Fields are shut-up late August and ewes allowed on in mid-January. In 2011 the deferred grazing was analysed at 20% crude protein and 11ME.

Lambs are drawn for finishing in late June with 88% grading R and above, 22% U and 12% O. The commercial lambs are marketed direct to Dunbia or Welsh Country Foods and the aim is to increase the number of pedigree breeding stock to sell.

Thistleyhaugh Farm is also conscious of the environment and Duncan and Angus are currently deciding whether to enter HLS. Part of their farm is also in a SSSI and in the past 10 years they have planted more than 4,500m of hedgerow. The farm also has one of the lowest carbon footprints for an upland farm at 8.3kg C02 eq/kg of lamb.

Morrisons are delighted to sponsor Sheep Farmer of the Year. We are committed to working with British farmers and proud to be the only major supermarket sourcing and selling 100% fresh British meat and poultry. Through the Morrisons Farming Programme we are working to build a sustainable industry.”