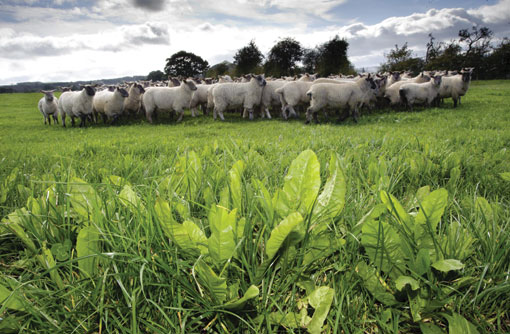 Sheep farmer Andrew Baillie of Carstairs Mains in South Lanarkshire said after sowing the crop last year his lambs “thrived” off it.

“I wasn’t sure what to expect, but what did take me by surprise was that although the lambs had been receiving creep before they went on to the chicory, once they were on it, they ignored the creep.

“At first I thought they didn’t know where the creep was, so I drove them down to it, but they still weren’t interested,” Mr Baillie said, speaking at the meeting.

In June 2012, Mr Baillie sowed 12 acres with 2kgs an acre each of chicory and Timothy, plus 0.5kg an acre of white clover.

“I had been pre-warned that I would need to keep the chicory grazed down to prevent it from bolting, so I grazed it hard, turning ewes and lambs on to it as soon as there was a bite.”

According to figures from EBLEX, forage chicory can deliver growth rates of 250-300g a day, which is a similar performance on legumes, but is better than typical gains expected from grass. The break crop also has a reputation for controlling worms in sheep.

Although Mr Baillie did not monitor egg counts in 2012, he has every intention to do so this year working alongside Jos Houdijk of the Scotland’s Rural College (SRUC) Disease Systems Team.

One of the first trials conducted involved two groups of lambs of the same age, weight and worm burdens.

One group was turned on to pure chicory, the other group on to clover and ryegrass. After two weeks the worm burdens of both groups were assessed.

The worm burden of the chicory-grazed group had reduced by about 50% in comparison with the clover and ryegrass-grazed group.

“This research suggests short-term grazing of plots of pure chicory could be used for partial de-worming in a rotational grazing system,” he said.

A further SRUC trial conducted by Dr Houdijk found the worm count from the chicory-grazed lambs was 65% lower than the lambs which had grazed the clover and ryegrass.

An additional benefit is that the reduction in the faecal egg count of chicory-grazed lambs also reduces the larval infection of the grazing.