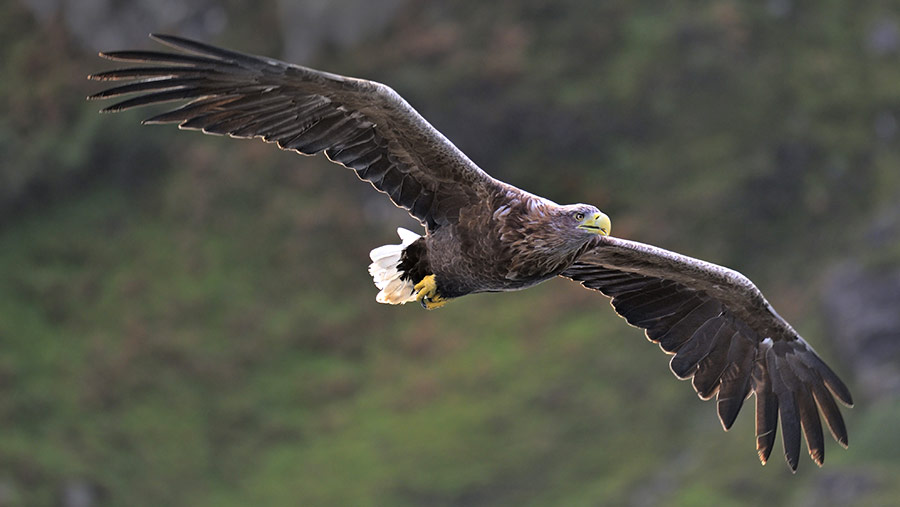 The sheep industry has denounced a government decision to reintroduce sea eagles on to the Isle of Wight.

Natural England has confirmed that 60 individual white-tailed eagles will be released over a five-year period from this summer.

Over the next five years, young birds bred in the wild in Scotland will be reintroduced on Forestry England woodland on the Isle of Wight. Breeding is not expected to start until at least 2024.

The government says reintroducing the eagles could help the island economy after a similar scheme on the Isle of Mull in Scotland boosted its local economy by up to £5m/year.

Their last-known breeding place in the region was recorded at Culver Cliff on the Isle of Wight in 1780.

But human activity and persecution led to the birds being wiped out.

The National Sheep Association (NSA) said it feels strongly that the sea eagles will prey on sheep and affect the livelihoods of many farmers and small-scale businesses owing to a lack of wild prey.

The NSA is also concerned that there will be no compensation or protection for farmers whose stock has been killed, injured or taken by the birds.

NSA chief executive Phil Stocker said: “These birds are a top-of-the-food-chain predator whose behaviour will adapt relating to food needs and availability.

“With wingspans reaching 6ft, we will see them taking livestock and other domestic animals.

“We will have consciously taken a decision that contradicts our interests in improving animal welfare and avoiding suffering.”

‘No evidence’ of predation

But a Natural England spokesperson said: “We have carefully examined the potential risk of lamb predation.

“There is no evidence of this becoming a problem where the eagles live alongside lowland sheep farming in Europe.

“However, we will ensure that the applicant puts in place clear routes to identify and manage any unexpected issues that might arise.”