We catch up with the Sheep Farmers of the Year, John and Sarah Yeomans from mid-Wales, to find out what they’ve been doing since the Awards ceremony in October.

See also: Find out why the Yeomans won Sheep Farmer of the Year

I was shocked, chuffed to bits and hugely grateful to Alison Harvey at Dunbia who put us in for the competition.

We were really nervous in the run-up to the awards night, but we relaxed once we got to the event. It was a wonderful few days – we’d celebrated our 31st wedding anniversary the night before and our youngest son, Joe, even flew back from Norway where he’d been working in an abattoir so he could spend the time with us. 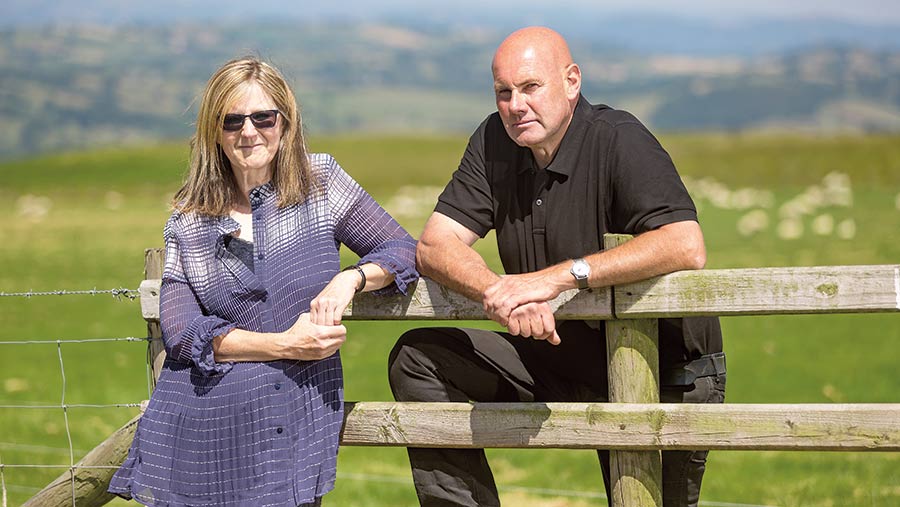 What’s new with your business since we last caught up with you?

Having been on a fascinating trip to Finland looking at grass use, we’re putting together a trial to explore growing a Finnish variety of Timothy grass that copes particularly well with hard conditions.

As farmers, we can only blame the weather and the government for so many things – so we’ve got to constantly try new approaches such as this.

Given some of our land rises to 1,400ft, we think it could have benefits in terms of yield, hardiness and palatability.

What’s the biggest challenge your business is facing right now?

Rising costs. In any business, there are always opportunities to trim costs, so we’re trying to do this in parallel with raising revenue from what we sell, whether that’s finished animals or breeding stock.

We’re focusing on feed costs, plus we spend a lot on fertiliser, so we do a lot of soil testing. We also recently bought a GPS spreader so, when it comes to fertiliser, we can apply less, more often, more accurately.

What’s the best farming decision you’ve ever made?

To marry Sarah. Our farming business is a real team effort – she’s much better than me at many things and when things are going pear-shaped, she always lifts my spirits.

Farming can be a very solitary existence, so it’s hugely beneficial to have someone to chat ideas through with, whether it’s your partner, family or friends.

Where have you put your Awards plaque? On the windowsill in the kitchen.

Finish the sentence. Agriculture is… A fantastic career and a privilege to be involved in.

If you were Defra secretary for the day and had the power to make one decision, what would it be? I’d talk to more farmers and double fence all boundaries in the UK.

The Farmers Weekly 2019 Sheep Farmer of the Year Award is sponsored by Shearwell Data. Enter or nominate now at awards.fwi.co.uk