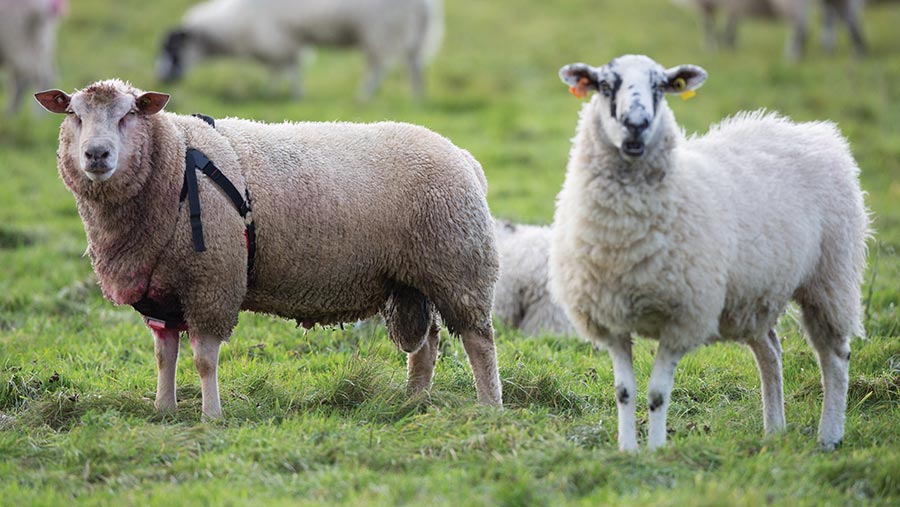 More rams are likely to be sold direct off-farm this year due to the cancellation of some breeding sales under Covid-19 restrictions. That means asking for a “bill of health” document and adhering to quarantine protocols is essential.

Kate Phillips, independent sheep consultant and co-author of the report, says this is something that must change.

“We should be giving animals time to settle in on their new farm.

But some people are ignoring it and expecting a ram to come off a farm and work the next day, which is too much, however they are reared.”

See also: How to carry out a ram MOT

Furthermore, the survey found most buyers knew very little about the feeding and parasite control of rams.

Dewi Jones, chief executive of breeding company Innovis, says the increased off-farm trade will allow buyers to find out more vital information from breeders about how sheep are managed.

“Premier sales normally have vets doing physical inspections of rams, but if you are buying directly from a farm, none of that is happening.

“If ever there was a time to justify a vet visit, it’s probably this year,” he points out.

This is also the perfect opportunity to establish long-term relationships between ram breeders and buyers, where both have a genuine interest in each other’s flock improvement.

Developing an open dialogue and trust are vital, they say.

Below, Ms Phillips and Mr Jones give advice to buyers and sellers to ensure rams are in top-tip condition ahead of breeding.

Ask the vendor questions about their management practices:

Breeders could complete a ram “Clean Bill of Health” form so buyers know the full details of veterinary treatments, vaccines and feed given to animals in the past six months prior to transfer. Download the form [PDF].

Keep rams separate from the rest of the flock for at least four weeks.

Hold rams in a shed for 48 hours. This means any resistant worms, expelled before the wormer has had a chance to kill them, will not be shed on to pasture where sheep can ingest them.

If sheep have not been treated for scab, and are at risk of having it, they should be treated with moxidectin.

This presents in small ulcers around the coronary band (between the hoof wall and hair).

It is very contagious so every effort should be made to avoid introducing it to your flock if you don’t have it.

Ask your vet to sample for Borders disease and while they are at the farm give the ram a once over, especially if this hasn’t already been done prior to purchase.

Borders disease is an infectious disease that causes abortion, the birth of small, weak lambs and those affected are known as “hairy-shaker lambs” because of their often fuzzy fleeces.

It is closely related to bovine viral diarrhoea (BVD) in cattle, and foetal lambs infected in early gestation (before 85 days) result in persistently infected animals that excrete the virus throughout their lives.

There is no treatment and the disease can cause severe production losses, with an increase in barren ewes and reduction in rearing percentage.

Get the ram on to the flock health plan and ensure it has up-to-date vaccinations to protect against clostridial diseases.

A survey of 600 UK sheep flocks in 2017 found many farmers were not quarantining rams for long enough or providing routine vaccinations.

The report, funded by the British Veterinary Association (BVA) Animal Welfare Foundation and supported by the National Sheep Association (NSA), concluded rams were used, on average, for 3.8 years, but the range was very wide (one to six years).

This fell short of breeder expectation, with those surveyed saying they wanted rams to last four to five years.

The main reason for culling was lameness (29%), followed by poor body condition (27%). On average, rams lost 9% of bodyweight while working.

Read the full report, Improving the Welfare and Longevity of Rams in Commercial Sheep Flocks