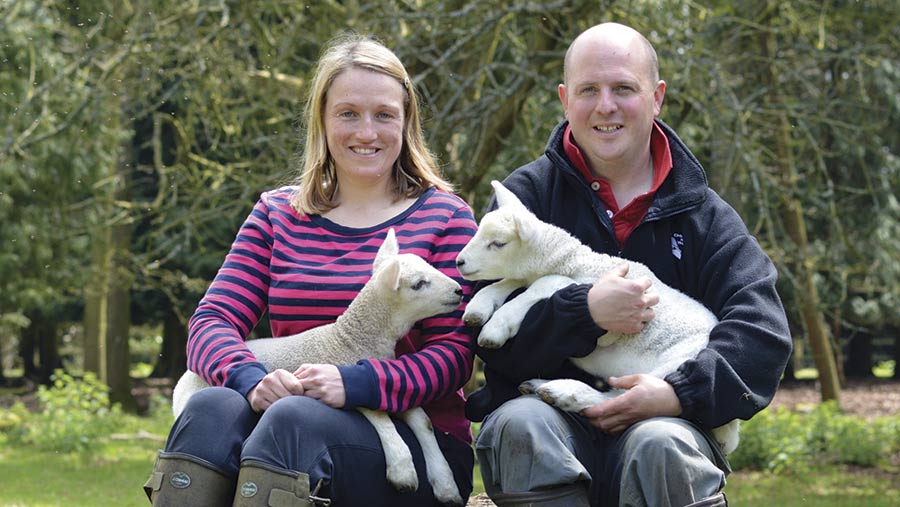 For new entrants into sheep farming, regularly reviewing your business plan and accepting it may change is necessary for any new enterprise to evolve and grow.

Every year after lambing, the husband-and-wife team sit down and have a meeting to look at what they want to do differently – their “annual health check” is how Mrs Hill describes it.

The Hills were grazing 400 Lleyn ewes across 21 different sites, with lambs sold deadweight to M&S through Dawn Meats or liveweight through Rugby Farmers Market.

Time to make a change

However, with an annual fuel bill of £4,000, generated by travelling to all the different sites, and without economies of scale to generate the profits, they began looking at other options.

Last year, the Hills managed to secure a contract-farming agreement with a landlord who had bought a new farm locally.

That, coupled with a share-farming agreement they had secured in 2014, meant they could plan the next stage of the business and scale back on some of the outlying grazing sites, as well as sheep numbers..

“This seemed like the ideal opportunity to try to cut costs and farm on one site,” says Mrs Hill.

Their contract-farming agreement came about as the landlord wanted sheep to graze as part of his arable rotation.

As part of the deal, the Hills can graze 65ha with a building included and grassland maintained by the landlord.

The share-farming agreement with Park Farm, Kirtlington, secured in 2014, provides the Hills with 49ha, although some of this is also used for horse grazing throughout the year.

The agreement is that the Hills provide the labour, equipment and machinery, while Park Farm provides the grazing. The sheep are shared 50:50 and any profit or loss is also shared 50:50.

They enlisted the help of an expert to sort out the paperwork. “Unlike arable share-farming agreements, there isn’t a template for sheep, so we got help with the agreement,” she says.

Top tips for setting up a new sheep enterprise

The plan now is for the couple to run a smaller flock and focus on producing lamb solely off grass. They aim to get accreditation from the Pasture-Fed Livestock Association.

By reducing sheep numbers, they will be able to graze in a more structured way with lower stocking densities. In turn, this will help reduce worm burdens and allow pastures to be rested.

The Hills have established a Signet-recorded Lleyn flock, which is maedi visna (MV) accredited and is performance recorded through the Performance Recorded Lleyn Breeders (PRLB) Group.

The idea is to disperse the entire commercial flock this August and scale back to 50 MV-accredited ewes and gradually build up to 100.

The couple are doing this because they wish to develop a neat business model. They want to feed their lambs forage for their entire lifetime and supply their own takeaway trailer.

The trailer is being launched later this year, and the plan is to serve a variety of lamb recipes at large festivals and events.

“We did a lot of research and found that a lot of lamb is eaten out of home. We got Leader funding for the van and hope to have it up and running by September,” says Mrs Hill.

They also plan on growing the sales of MV-accredited breeding stock, which has been really successful to date.

“We can see a future in sheep farming and lamb production, but we want a business model we are in control of without escalating costs.

“By running a smaller flock and being in control of our costs and end market, we should be able to grow a bigger business,” says Mrs Hill.

Scaling back ewe numbers is also allowing the couple to focus on the food business. Mr Hill’s brother is a chef who has held a Michelin star. By working with him and using Mr Hill’s experience in the catering trade, they plan on using the entire carcass in various recipes.

“We will serve loads of different recipes, such as burgers and riblets from the breast, which are often the hardest bits to use,” she says.

“We want a nice self-contained business, selling everything from nose to tail,” she says.

How did you get in to sheep farming?

I first set up the flock in September 2012, along with a friend, while I was working full time as an agricultural technologist at Sainsbury’s.

The idea was to produce a uniform lamb for supermarket shelves by applying the techniques I had learned from working in the pig and poultry industry, as well as their use of data. I also applied research I had access to while working at Sainsbury’s. Rupert got brought into the business in 2014.

How much did it cost to set up?

Both my friend and I invested £25,000 to secure 150 Lleyn ewe lambs each, a mobile handling system and trailer. But getting funding was hard.

We put together a really comprehensive business plan for the bank and I don’t think they even looked at it. We had to raise money through family lending and personal loans – it was a real struggle.

Where did you buy your sheep from and why did you choose Lleyns?

Ewe lambs were purchased from a high-performance flock in Northumberland and rams were Signet recorded. We chose Lleyns as they are hardy and small. We have been pleased with the breed.

How did you get land to graze?

Trying to get land to graze was hard for the numbers we had. We were having to graze pony paddocks and some rubbish land, but you have to do it to build up some land and to open doors.

We probably started with about 16ha to begin with.