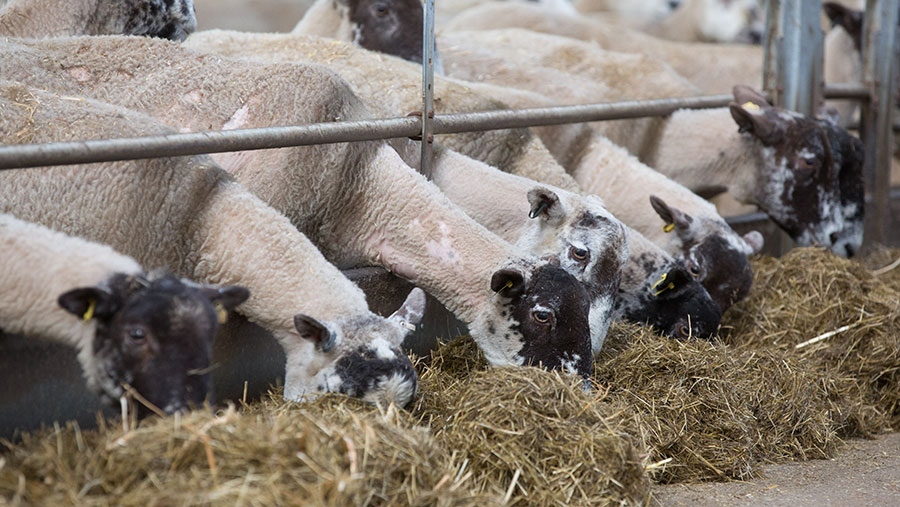 This produces ketones as fat reserves are used as an energy source as opposed to glucose in the blood stream, explains John Fishwick of the British Veterinary Association.

Body Condition Scoring is part of this process, as is feeding ewes according to number of foetuses carried, meaning scanning is a worthwhile exercise to inform prelambing rationing.

What is twin lamb disease?

The condition can occur in late pregnancy when the high demand for glucose from the rapidly growing foetuses outstrips the ability of the ewe to provide it.

This is most common when twins or triplets are present and for this reason it is called twin lamb disease.

As a result of the high demand for glucose the ewe starts to rapidly break down her own body fat reserves and this produces chemicals called ketones, which rapidly build up in the blood.

High levels of ketones have serious consequences for the ewe and will make the ewe feel dull and unwell.

As the levels increase she will be likely to stop eating and, as she then has no energy intake herself, the situation rapidly spirals downhill.

Ewes with advanced twin lamb disease are frequently very dull, unable to eat and unable to stand. They will often show a rhythmic and involuntary movement of their eyes from side to side known as “nystagmus”.

As a result of the rapid breakdown of body fat they will usually be very thin. At this stage attempts to save the ewe and the foetuses are usually unrewarding.

It is sometimes necessary to induce an early lambing where dead lambs are likely to be born, but it may save the life of the ewe.

If cases are spotted earlier then treatment may be more successful. Early signs may include ewes having reduced feed intakes, appearing slightly dull or being slightly twitchy and nervous – all signs that can be caused by increasing levels of ketones in the blood.

It is very important to get expert advice from your veterinary surgeon on the most effective treatments available for pregnant ewes showing these early signs.

How can you prevent the disease?

The key to preventing and reducing the likelihood of twin lamb disease is good nutritional management of the pregnant ewe.

It is very important to regularly assess the body condition score (BCS) of pregnant ewes. It is usually very hard to see how much fat and muscle cover there is due to the presence of the fleece, but it can easily be assessed by feeling the transverse processes (often called the short ribs) with your hand.

Monitoring the BCS of ewes regularly will ensure that they are not getting too thin, or indeed too fat, at any stage.

Ewes with singles, twins and triplets then need to be managed as separate groups and fed differing amounts, especially during the later part of pregnancy. If all ewes are simply fed the same then those with multiple pregnancy may be at risk.

Stress and movement can result in triggering cases of twin lamb disease, especially in very late pregnancy and great care should be taken to avoid this.

A number of factors can cause a temporary reduction in feed intakes in pregnant ewes and this drop in energy and feed intakes can push susceptible ewes over the edge into twin lamb disease. Poor weather and rainy, cold conditions can be responsible for reduced feed intake.

When really severe weather occurs, such as unexpected snow, and where normal feeding operations are disrupted, this can be very serious.

Seemingly straightforward operations such as moving and mixing ewes can have serious consequences in late pregnancy and care should be taken to reduce stress and make any changes in good time before lambing starts.

Moving heavily pregnant sheep indoors just before lambing can be a significant risk. The risk will always be much lower if ewes are in sufficient body condition and are being fed appropriately for the number of foetuses they have.

It is possible to have a blood test taken from a group of pregnant ewes to look at their blood ketone levels. This can be a useful indicator of how well the ewes are coping with their diet and whether any adjustments may be beneficial, as well as giving an indication of the risk of twin lamb disease in the group.