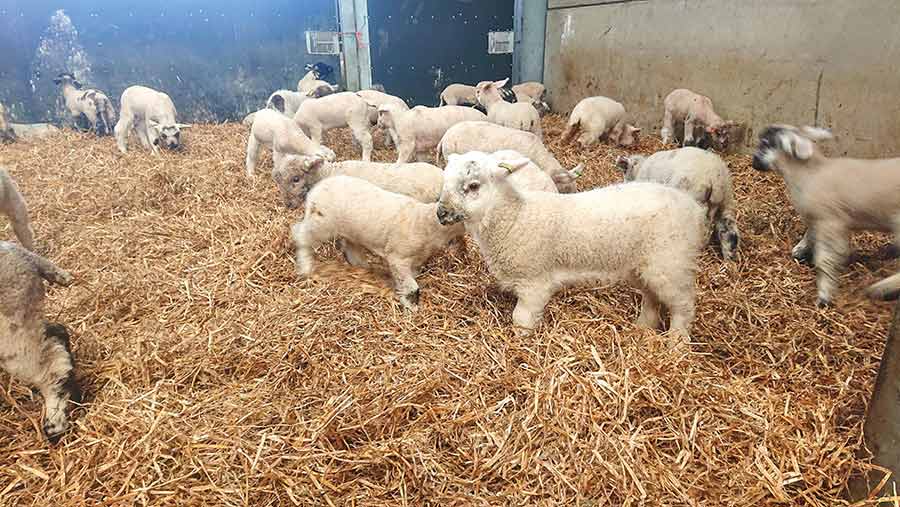 Cade lambs are often seen as a challenge. However, Cornish farmer Adrian Coombe has come to view them as an opportunity, and his surplus stock is now an integral, profitable part of the business.

The sheep flock comprises 620 North Country ewes and ewe lambs that lamb indoors over two months. Lambs are sold from 10 weeks old as deadweight and all replacements are bought in.

With a busy schedule, investing time and money into rearing surplus lambs may seem like an odd choice. However, it has proven to be beneficial and profitable.

“I joined the AHDB Strategic Farm programme in 2019 and one of the objectives I had was to improve the management of ewe lambs to regain condition after lambing,” says Mr Coombe.

To do this, management at lambing was a key focus and Mr Coombe had already been taking surplus lambs off ewes and rearing them.

“We want to give the sheep every chance to regain condition and breed effectively next year, and this process starts during the current year’s lambing.”

With this in mind, Mr Coombe’s protocols mean the farm doesn’t turn out more than twins with a ewe, and only singles with ewe lambs. The surplus makes up the cade lamb flock.

“With the breeding ewes, we normally get 80-90 triplets a year, and so always take the third lamb off, regardless of whether the ewe is fit enough.

“We try to leave the most equal two to encourage even growth. In the case of doubles, we will always take off the thinner lamb if we don’t think she is capable of rearing two.” 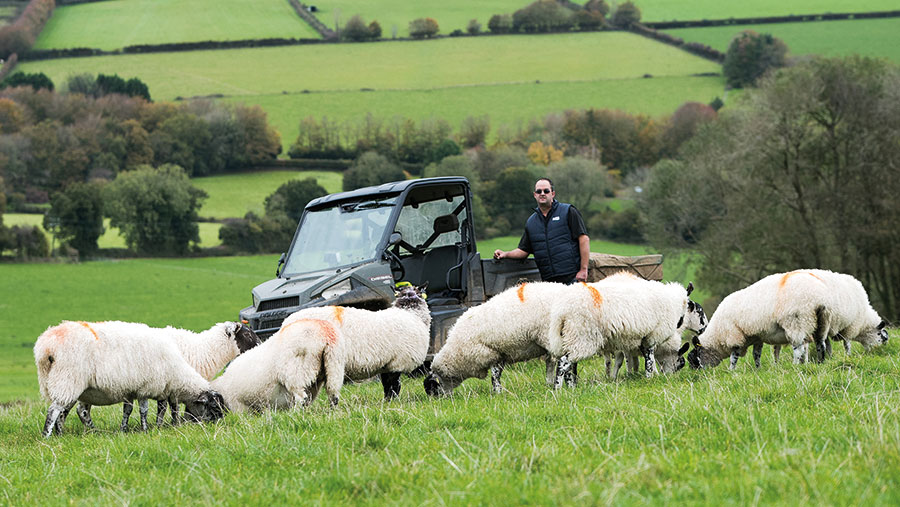 When an animal lambs, she goes into an individual pen, where her offspring are weighed, tagged and ringed before turnout, explains Mr Coombe.

“Where there is a cade lamb, it will stay with the mother for 24 hours to ensure it receives colostrum, before moving into a training pen.”

Surplus lambs are fed using a Volac milk machine and artificial milk powder. “We use Lamblac milk replacer and try to keep a slightly older lamb in the training pen to show the younger ones what to do, and this works well.”

The cade lambs then stay in the training pen for 24-48 hours, until Mr Coombe is satisfied that they are fit, strong and sucking well.

“They then go into a larger pen with the rest of the lambs. These pens will have 60-70 lambs at the peak, but there are lambs going in and out daily – with weaning starting at 35 days old.

Unlike the naturally reared lambs, the cade flock is kept indoors at all times for ease of management.

“The cade lambs are fed a start-to-finish pellet ad-lib as soon as they are moved into the main pen and are weaned straight off the machine onto home-rolled barley and a protein pellet. The protein pellets are mineralised, so we do not feed any extra minerals.”

As part of his involvement in the Strategic Farm programme, Mr Coombe provided costings to AHDB (see “Rearing costs and margins for cade lambs, 2018-2020”).

The figures show that cade lambs have continually generated an income for the farm over the past three years.

The 2020 figures are slightly lower due to a bout of pneumonia in the cade lamb shed, meaning quite a few lambs were lost at three to four weeks old.

“We then lost a second lot just after weaning, which we think was due to stress, and obviously this had a knock-on effect across our costings.”

Mr Coombe believes the pneumonia was a result of attention being diverted to the farm’s shop. The shop experienced a surge in demand as lockdown set in last year, putting labour under pressure.

However, he says this has highlighted the importance of attention to detail when it comes to making a profit from the cade lambs.

While Mr Coombe says he has looked at the potential of changing to a cheaper brand, the risk of lower growth rates and performance wouldn’t be worth the saving.

The costings show no vet and medicine costs, because the cade lambs do not receive anything at all, apart from Ovivac P sometimes, if it is left over from the main flock – though this is not given routinely.

Lambs are selected for slaughter from 10 weeks, with the farm weighing them regularly from eight weeks and including cade lambs in this selection.

“We aim for about 38kg in the early season to get the best prices, and 43kg later in the season,” says Mr Coombe.

The data (see table below) show that the cade lambs reach slaughter earlier than the natural lambs, strengthening his argument that cade lambs are worth investing in.