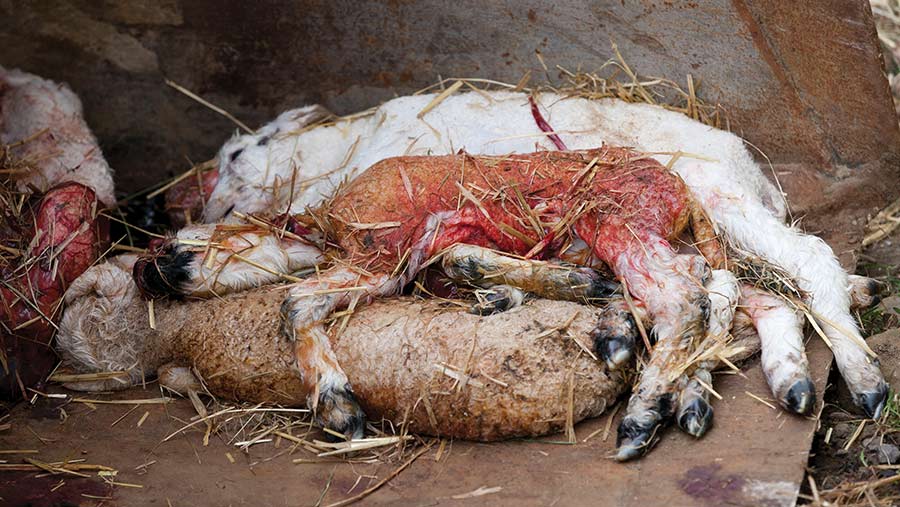 It is thought almost all sheep flocks in the UK have been exposed to the parasite Toxoplasma gondii, which can cause miscarriages, stillbirths and weak lambs.

Sheep vet Fiona Lovatt from Flock Health outlines what can be done to manage infection in the run-up to breeding and how to diagnose it in a flock.

What is Toxoplasma gondii?

It’s a parasite that causes toxoplasmosis in sheep. It is estimated up to 90% of sheep flocks in Great Britain have had some exposure to it.

If the parasite infects a pregnant ewe for the first time, it can cause disease in the placenta and the developing foetus. Any infection early on in pregnancy may cause foetal absorption, stillbirth, a mummified foetus or the birth of a live but weak lamb.

Infected ewes may also produce a live lamb alongside a weak, dead, or mummified twin lamb. The earlier in pregnancy that infection occurs, the more severe the consequences and there can be lots of empty ewes at scanning time if a flock of naïve, in-lamb ewes encounter toxoplasma for the first time.

If a non-pregnant animal becomes infected, they show few disease signs, but may have a passing fever.

How do ewes get infected?

Sheep pick up the toxoplasma parasite readily from the environment by ingesting oocytes (parasite eggs) on pasture or in contaminated feed and water. Cats and members of the cat family are the definitive hosts of the parasite.

Cats become infected for the first time usually when they start hunting and eat infected wild birds and rodents. They then shed millions of tough-shelled oocysts into the farm environment through their faeces. However, not every cat is to blame – it is only young or sick cats that really shed the parasite, so it is worth making sure any resident farm cats are neutered – to avoid further kittens that can act as a source of infection – and healthy.

Unfortunately, the sheer volume of infectious oocysts produced by the parasite and their resistance to destruction leads to widespread environmental contamination.

Toxoplasma gondii oocytes have a tough outer shell and can survive in the moist and temperate UK farming environment for years. Toxoplasma infection cannot be passed from sheep to sheep.

Once a ewe is infected, can she be cured?

There are no practical medications that can cure sheep infected with toxoplasma or prevent the consequences once an animal has become infected.

Following infection, sheep develop immunity to the parasite, which will protect them against disease in a subsequent pregnancy. Consequently, it is worth retaining any ewes for future breeding that may have aborted due to toxoplasma.

How is the disease diagnosed?

If more than 2% of ewes in a flock fail to lamb, produce weak lambs, or abort in any one lambing season, and if aborted material is not available, then it is worth asking your vet to take blood samples from six to eight affected ewes. These blood samples must be taken from ewes within four months of lambing to obtain relevant results.

MSD Animal Health runs FlockCheck – a subsidised diagnostic scheme – every year from March until the end of June to check for toxoplasmosis and enzootic abortion (EAE). This allows farm vets to identify whether toxoplasmosis or EAE (or both) are likely to have been involved in any aborted lambs, barren ewes or numbers of weak, sickly lambs.

How can you prevent infection?

Toxoplasmosis can be controlled and vaccination of the whole flock is the gold standard disease management regime.

Vaccinating young replacement ewes before they go to the tup for the first time should be the priority and the costs of a vaccination programme are easily recovered by a reduction in future flock barren and abortion rates.

Vaccination is known to protect ewes for at least two lambing seasons and many flocks just vaccinate the youngest age group of ewes each year. You may wish to consider vaccinating older ewes if they are bought in from a different flock as naive drafts.

Breeding female sheep should all be vaccinated between four months and three weeks before tupping. Ewe lambs must be aged over five months for their first vaccination before tupping. Sheep should be given a single 2ml dose of the vaccine by intramuscular injection using an automatic vaccinator fitted with a Sterimatic needle system.

Can Toxoplasma gondii pose a risk to humans?

Yes. Toxoplasma may also be transmitted to humans from the ingestion of oocysts or from eating undercooked meat containing parasite tissue cysts.

Pregnant women and immune-compromised individuals are major risk groups and should avoid contact with cat faeces or cat litter trays.

Due to a number of different causes of sheep abortion, pregnant women should also avoid contact with ewes at lambing time.