Reconfiguring winter housing and ewe rations has increased lambs sold by more than 300 lambs a year at a mixed family farm in the Scottish Borders.

The Liveseys say switching to feeding a total mixed ration (TMR) to their flock of Scotch Mules at Firth Farm has saved them time and money during the winter.

With scanning rates at 175-200% this has resulted in a further 320 lambs sold annually.

See also: How a dairy farm is using TMR to improve calf health 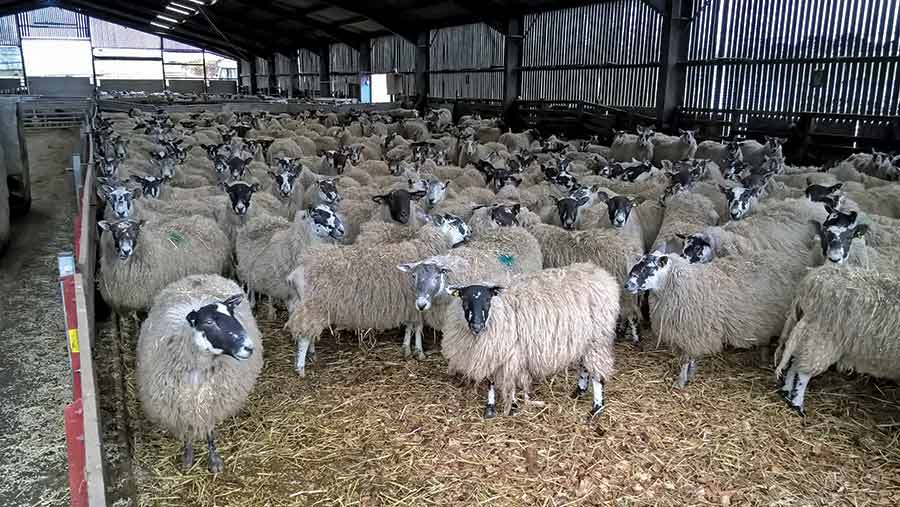 “This year we scanned at 191%, which is an extra 380 ewes carrying embryos,” explains Iain Livesey, who farms with parents Rob and Kath. “With mortality rate on top of that, we hope this will translate into at least an extra 340 lambs.”

The main ration consists of home-grown bruised barley, grass silage and urea treated wheat, topped up with soya two weeks ahead of the first lambing day.

The Liveseys made the switch to feeding TMR in 2002 and the system shares the mixer wagon with the farm’s cattle enterprise and maximises winter cereals grown at home.

“One of the key things for us is the ability to feed home-grown urea-treated wheat,” Iain adds. “It removes the need to feed compounds.”

Currently costed at £110/t, treated wheat grains at 16% crude protein have represented a 40-50% saving on basic ewe nuts over the past 16 years, believe the Liveseys.

It has also saved time at feeding. Before the TMR system, feed was bagged and manually taken to three troughs.

However, now each ration can be mixed and fed within well under an hour, with extra space yielding more feed trough access, gauged at 30.5m for 250 sheep (12-13cm per ewe).

Sheep are body condition scored (BCS) every two to three weeks after being taken off heavy clay pasture land at Firth Farm and are housed by New Year’s Day.

The flock is assessed and drafted at a rate of 200 ewes an hour into three broad groups, with feed adjusted to ideally maintain a constant BCS of 3.0 from mid- to late-pregnancy.

The fat group receives just grass silage and the thin group is fed silage to appetite at no less than 1kg of wheat, bruised barley and soya each day throughout the housing period (see table).

Feeding of cereals is tailored to litter size, and silage (which is typically 11ME, 30% dry matter and 9% crude protein) is fed to appetite at a minimum of 1kg DM/day, although Rob admits silage variability needs watching from year to year.

“Silage quality can be low in value some years so palatability and intake is improved with molasses at 1-2%,” he explains. “The 2013 and 2014 silage crops required it but the 2015 crop hasn’t.

“We’ve found it’s important to watch young sheep as they are fussier and more selective so we keep a close eye on their condition.”

“This is what they generally eat from January to the start of March but it slowly falls through gestation and is about 3.5kg a head by the middle of March.”

This year the Firth Farm flock is penned into five groups:

Many sheep are in pens of 200-250 ewes, which for Rob means fresh bedding and mucking out are essential, as is foot-bathing when ewes are condition scored every two to three weeks.

Sheep have access to fresh wheat or barley straw through the day and are bedded daily.

“As lambing approaches, we divide pens up and typically they end up in groups of 200 as they are drafted to their nutritional needs as we condition score them,” says Rob.

Sheep stand in a 140-litre foot-bath for about 30 seconds, in either formalin or an antibiotic product containing tylosin added at 3%.

“This is to rest feet from the formalin and can be used as a reactionary measure if scald and foot-rot flare up,” explains Rob.

The Liveseys have vaccinated against foot-rot this year for the first time after an orthophosphoric acid, sulphuric acid and zinc treatment failed to have the desired impact last winter.