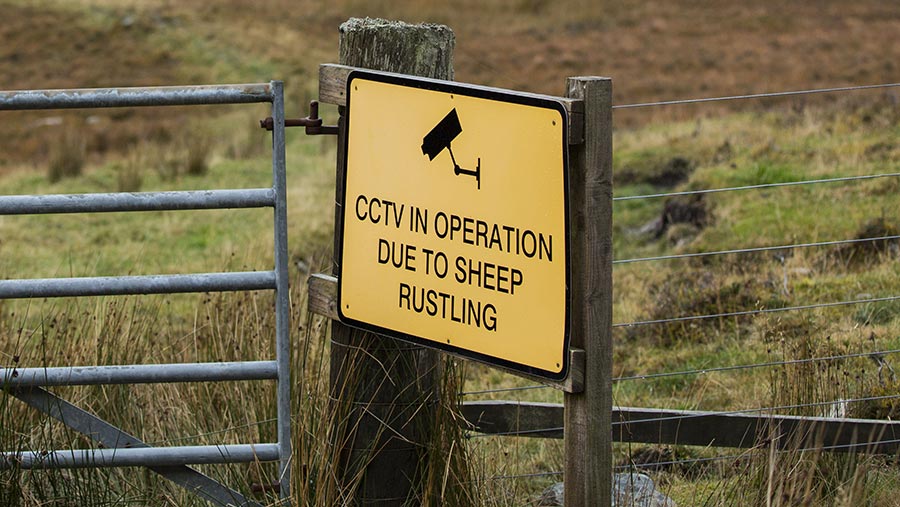 Livestock theft is one of the costliest crimes for the UK’s farming sector, with dozens or even hundreds of sheep being stolen in a single raid.

NFU Mutual senior agent Amanda Wallbank says: “Farmers I visit who graze on common or fell land say they have as many as 20 missing sheep each year, but uncertainty means they never report it.

“If the suspected losses were reported then sheep theft figures would increase hugely. It is a much bigger problem than people think.”

But it’s important to report any theft, especially if the industry wants the problem to be recognised and resources put into theft prevention.

What to do if your sheep are stolen

“Swaledales are probably the main breed we have reported as stolen.Often, they are pedigree and are probably stolen to improve flocks.”

People found stealing sheep can be prosecuted for theft or handling stolen goods.

The type of crime will dictate the sentence, but guilty parties could face up to 10 years’ imprisonment.

It also warns the public that buying meat from unusual sources could mean it is rustled and puts their health at risk.

There are several steps farmers can take to reduce theft and technology is providing effective ways of tracing livestock.

Mr Barr says: “A lot of options are low cost. It’s important you act rather than wait to become a victim.”

In one year, he had 80 ewes stolen from his 500-Welsh Mountain flock on common grazing and, from then on, realised he had to do something.

“We couldn’t go on any longer if the thefts had continued, we would have packed it in,” Mr Fox says, who found August was a prime time for criminals, with breeding ewes the main target.

Since then he has changed his practices and now all sheep are marked with TecTracer twice a year.

TecTracer
It is applied to the fleece such as marking paste and contains thousands of microdots, coded with the farm details, Mr Fox explains.

The microdots are virtually impossible to remove.

Codes are held in a secure database, and can be broadcast to auction marts, abattoirs and police.

He says: “It is an added cost, but if there’s a discrepancy over sheep then mine can be easily identified.

“There’s also a fear factor with using TecTracer because ownership can be easily proved if anyone is caught with sheep.

“We advertise the fact we are using it with signs on our gates.”

More visible marking
Mr Fox is also using more red marker paint, which can be spotted quite easily on the mountain.

Changed gathering and feeding patterns
Making visits to the flock more unpredictable so thieves are less certain of remaining undiscovered.

Increase awareness of rural crime
Mr Fox says everyone needs to be aware about rural crime happening in the local community and to be vigilant.

Breeding decisions
Any ewes that roam too far from the grazing area on the hill are not sent back up to the hill and are mostly culled.

Microchip plea
Mr Fox believes the current tagging system is not fit for purpose and would welcome a microchip system instead.

He says: “Sheep tags can be removed and swapped.

“If we want traceability, lambs need to be chipped. If chips don’t tally with records, then business can’t be done.”