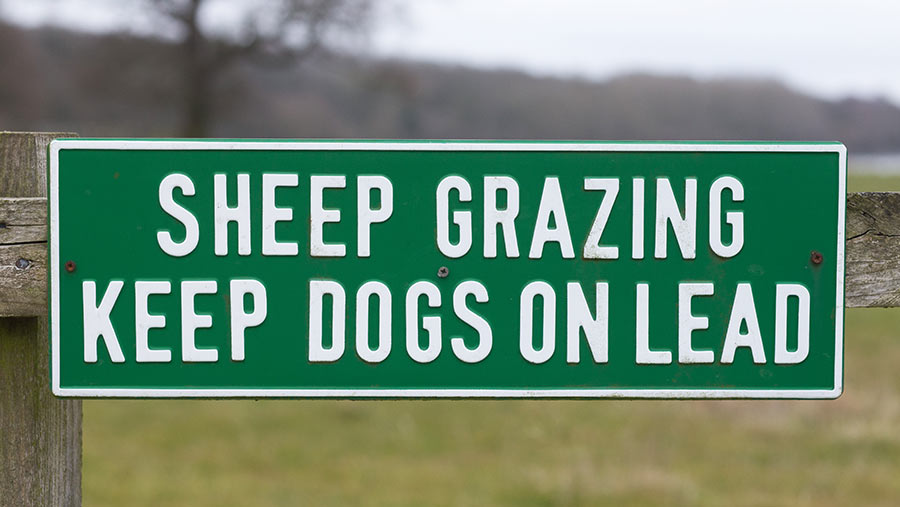 Sheep producers suffered an average of seven attacks per flock in the 12-month survey period in 2017, according to the National Sheep Association’s annual survey.

Ultimately, preventing sheep worrying should be down to dog owners taking tighter control of their animals.

But there are steps that can be taken by the flock keeper to reduce the risk of attacks.

What the law says

Under the Dogs (Protection of Livestock) Act 1953, if a dog worries sheep on agricultural land, the person in charge of the dog is guilty of an offence. The Act considers sheep worrying to include:

The Countryside and Right of Way Act (CROW Act), which sets out public rights to access open land (land you can access without a path such as mountains, moorland or registered common land), states dog owners must keep their dogs on a fixed lead of 2m or less near livestock.

The owner of open access land can close areas containing sheep to dogs for up to six weeks once a year, as a safeguard during lambing.

Dogs which do not need to be on a lead and are exempt to the above ruling include:

However, working dogs need to be clearly working at the time to be exempt.

Report it to the police

Sheep worrying is not currently classified as a recordable crime (any offence in England and Wales where the police must keep records of convictions and offenders on the Police National Computer), and as a result, there is no universal recording procedure across national police forces.

The police on livestock worrying

Without a specific category to lodge an attack as a crime, it makes it less likely that the police will take action and a prosecution is more difficult.

But this shouldn’t put you off reporting it. Doing so will help raise the profile of sheep worrying to ensure that police are aware of the problem.

If it’s taking place then dial 999 as livestock worrying is considered an emergency.

Stress to the operator that there either has been or could be serious damage to your livestock.

Give them an accurate location and in remote areas that are more difficult to find provide OS grid co-ordinates and the location of the nearest road or point of interest or arrange to meet them to guide them.

If the dogs have left the location dial 101, ask for the relevant police force and tell the operator what has happened. You can also use this number to report uncontrollable dogs or dogs that are being allowed to trespass on your land unrestrained.

Shoot the dog as a last resort

Under Section 9 of the Animals Act 1971 the owner of either the land or livestock or any authorised person may kill the dog in order to protect the livestock if the dog is worrying or is about to worry the livestock.

However, there must be no other reasonable means of ending or preventing the worrying (the owner cannot get the dog under control and you have no means of ascertaining ownership) and the dog must not have left the vicinity.

However, if livestock has trespassed onto someone else’s land and a dog belonging to the land owner is worrying the livestock you are not permitted to shoot the dog.

However, losses may still be claimed from the dog owner through a civil claim.

If you do shoot a dog then under law you are required to report it to the police within 48 hours and it is also advisable to contact the dog warden.

Preserve attacked livestock for forensic examination. This can secure key evidence to identify the dogs involved. If it is raining or wet, cover carcasses with waterproof material to obtain the best evidence.

Take pictures or videos of the attacked livestock, or, where possible, the whole scene as well as eartag numbers, to provide to the police.

This can be used as evidence if the matter ends up in court.

Getting a vet to examine the stock can provide as expert medical evidence to help gain successful prosecutions.

Document subsequent abortions or prolapses and, while it may be too expensive to call your vet to bear witness, it is worth calling them to notify them.

Gloucestershire-based flock owner Kevin Harrison has lost almost a dozen ewes, with many injured in a string of dog attacks.

He has taken a number of steps to protect his flock from future attacks and believes they could help other farmers prevent attacks.

Raising the sheep-worrying issue with walkers face to face is an effective measure, especially when it is done in a non-aggressive and positive way, Mr Harrison believes.

While some members of the public respond rudely, others listen and take more responsibility. It is a better approach than to be confrontational, he suggests.

Planning field rotations around the walking calendar is a similar approach to watching the weather forecast.

Mr Harrison’s farm lies between Bristol and Bath, and holiday weekends attract large numbers of walkers from the urban fringe.

“We also take note of holiday dates outside the spring and summer such as Boxing Day when we see a rise in people on our footpaths,” he adds.

Work with the police

After some incidents Mr Harrison has worked alongside Police Community Support Officers (PCSOs) to encourage the public to take more care.

PCSOs have stationed themselves on footpaths and warned walkers to keep dogs under control.

Police presence can help to get the message across to the public more forcefully than farmers can on their own.

In high-risk areas where repeated attacks take place, fencing off footpaths may be the only effective solution.

Mr Harrison has spent £6,000 on a 1,000m-long wire fence with two barbed wire strands to restrict walkers and their dogs to the footpath.

“The farm is adjacent to Bath racecourse, which recently applied successfully to move a footpath closer to our fields”, explains Mr Harrison.

Despite an appeal, he was unable to keep the footpath away from the field and the following increase in walkers left him without no alternative but to put up the fence.

The last straw is to avoid sheep production on some fields. “We have resorted to hay making on one field that runs alongside a river bank path.

“The problem is so bad there that we have had to give up sheep production altogether, but the sheep welfare has to come first,” Mr Harrison says.

Eleanor Phipps from the NSA provides her tips:

It’s a relatively simple step to create signs warning walkers to put their dogs on a lead or you can download them and print them from the NSA website.

These should be put up on access points around the fields, warning of the risks to stock and urging walkers to keep their dogs on a lead.

It’s a less obvious step to remove signs at certain times of the year or when a field is empty, but it is equally important.

If a sign is left hanging off a fence or stile all year round it can fade into the background and lose its impact.

And when signs are left after stock has been moved, walkers can become complacent and wrongly assume that the field is always empty, says Ms Phipps.

They are also using the various platforms to raise awareness of the dangers, says Ms Phipps.

Some farmers also print off and post information on village noticeboards.

In Malvern, near the NSA’s Worcestershire headquarters, the local council issues warnings through its Facebook page, she adds.

Looking ahead and planning for an inevitable increase in footfall along rights of way is a useful step.

It may be worth taking stock out of a field used by the public earlier than planned if the weather forecast suggests a period of good walking conditions is on the way.

The NSA is urging all sheep farmers to write to their MPs to raise awareness of the issue of sheep worrying.

The more it is raised the more likely the Home Office will act to pass legislation to make sheep worrying a recordable crime.

It then becomes easier to prosecute and ultimately this will protect flocks in the future.