Eight of the 65 bulls on offer sold for five-figure sums, with a clearance of 87%, while there was 100% clearance for the 33 females on offer.

“They (buyers) were also aware that the by-product steers are continuing to find a ready market influenced by Morrisons Shorthorn Beef scheme,” she said.

Breaking the previous record of 17,000gns for Willingham Formalhaut with a bid of 26,000gns was Glenisla Jackpot (pictured), a roan 23-month-old by the Australian bred Broughton Park Thunder. Out of the home-bred Glenisla Desire from Major John and Catriona Gibb, Blairgowrie, Perthshire, he sold in the breed’s top 5% with an SRI +24 to James Porter, Lisburn, Co Antrim. 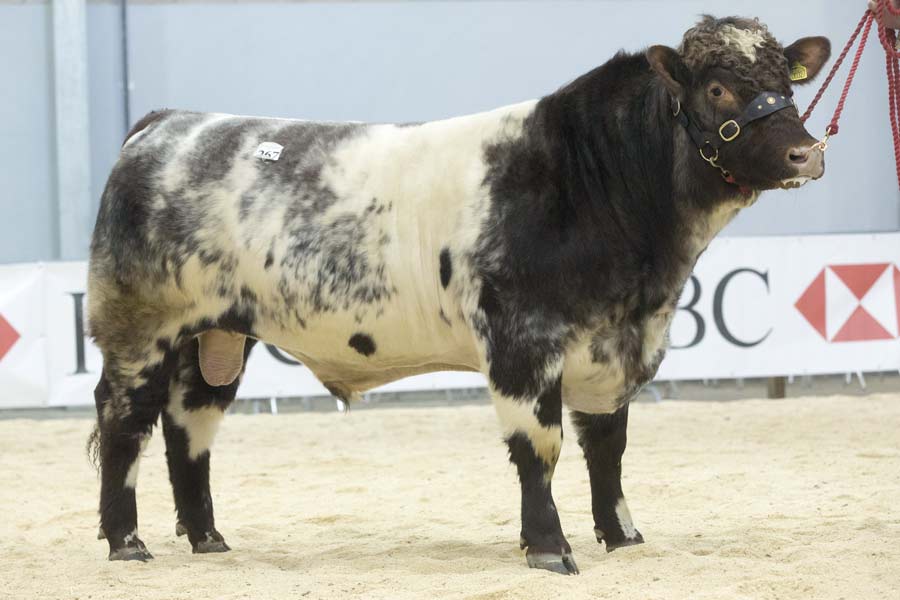 The day’s second highest call of 15,000gns was made by Bill and Jane Landers, Newton Stewart, Wigtownshire, for the reserve junior champion, Coldrochie Jurassic (above) TI +18, SRI +19, a 20-month-old roan by the 12,000gns Knockenjig Foremost from Douglas McMillan, Luncarty, Perthshire. 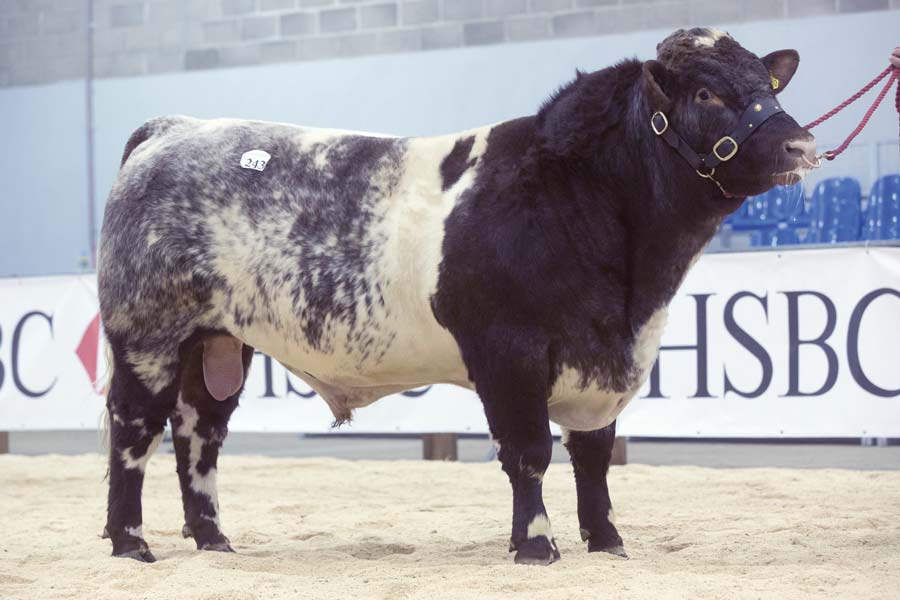 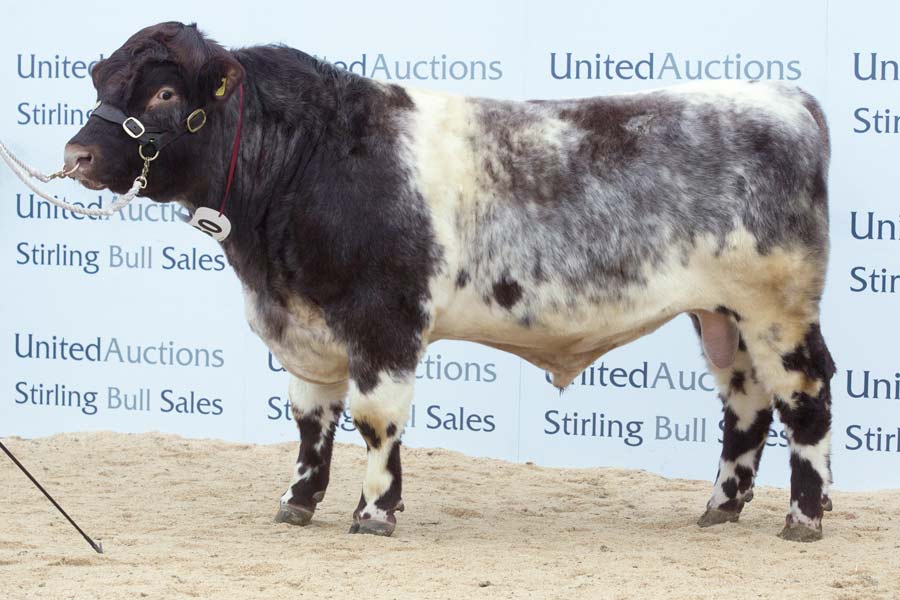 Three entries from Duncan McDowell, Newtownards, County Down, and each by the Canadian-bred Elliot Matrix were in demand. The junior champion, Castlemount Jetliner TI +15, SRI +8, a 19-month-old roan made 13,000gns to E and T Richardson, Preston, Lancashire.

Mr Porter was in the limelight earlier in the day when his two-year-old roan, Uppermill Supreme TI +18, SRI + 14, a Carrock Chalkie son, was awarded senior and overall reserve titles and sold for 6,000gns to G Hunt, Thirsk, North Yorkshire.

The Gibbs father and daughter team went on to invest some of their takings in Millerston Jamboree TI + 20, SRI +18, the intermediate and overall supreme champion, from Jack and Grace Ramsay, Mauchline, Ayrshire. They paid 12,000gns for this 21-month-old roan by Meonhill Charlie Chaplin. 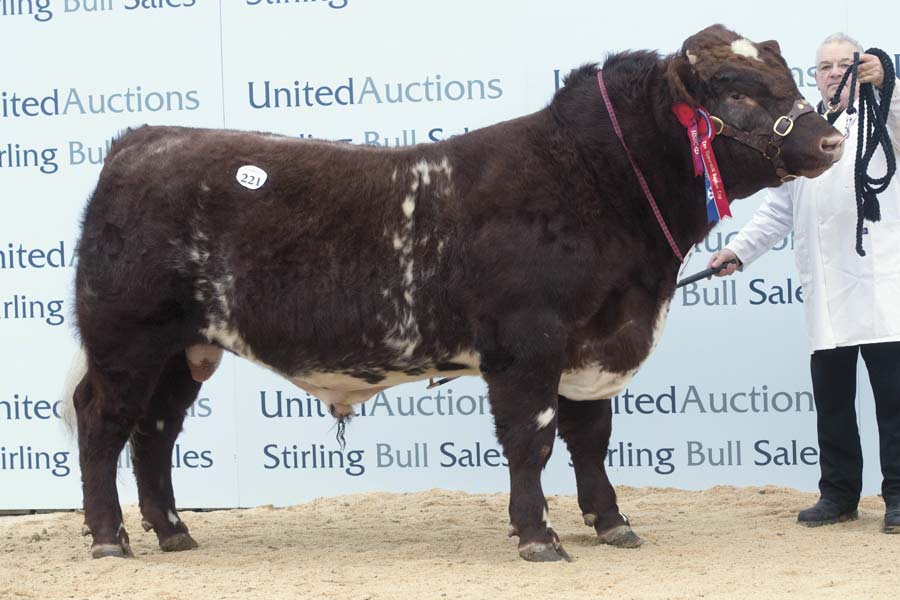 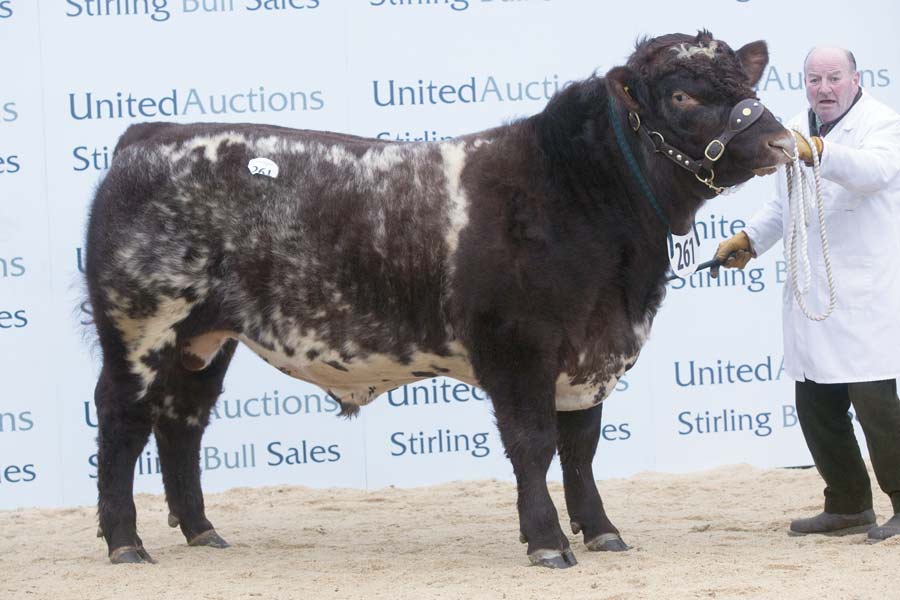 Fearn Jumpstart TI +25, SRI +30 (above), a 20-month-old roan by Fearn Godfather from John Scott and Partners, Tain, Invernesshire, was bid to 10,000gns by David and Rosemary Dickie, Sanquhar.

Next at 4,800gns was Galla Julie Wildeyes TI +13, SRI +11, a little red and white 20-month-old from JW Frame, Biggar, Lanarkshire. Sired by Kidston Rambo, she was secured by Eamonn McCormack, Strokestown, County Roscommon.

Two entries attracted a 4,500gns bid. First to go was the female champion, Lancaster Liz 21 of Skaillhouse, a 23-month-old roan from C Macadie and Sons, Thurso, Caithness. A Glenisla Faust daughter, she was sold to S and J Hodgson, Bradford, West Yorkshire.