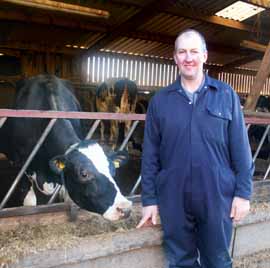 A big increase in silage dry matter intakes on a Lancashire dairy farm has lifted milk production by 900 litres a cow and enabled feed costs to be cut by £30 a head over the first 200-days of lactation.

The milk went up and the costs went down, according to Anthony Bretherton, who runs the 135-cow Beaconside herd of pedigree Holsteins at Fellside Farm, Bleasdale, near Garstang.

The analysis of his first-cut silage showed a 72.9% D-value and 29.3% dry matter. With its high energy value he decided last August to reduce the bought-in energy ingredients of the cows’ ration. They cut the caustic wheat inclusion by 1kg a head a day and reduced the molasses by 0.5kg a day, but the silage was good enough to cope and even to increase the yield.

The herd’s current average is 10,300kg at 4% fat and 3.2% protein, but this winter yields have maintained an increase of three litres a day while continuing with the basic winter TMR diet of grass silage, caustic wheat, rapeseed, rumen bypass protein, molasses, soya hulls and a rumen-protected fat

“This time last year the herd average was 9400 litres. In mid-January this year the milk records show our cows were averaging 37 litres a day,” says Mr Bretherton.

Silage ground at Fellside Farm is closed-up in mid-April after having received about 2000 gallons of slurry in January/February, followed by a further 2000 gallons in early April, after which fertiliser is applied. Last year the silage ground received 40 units of straight N an acre.

“We aim to take our first cut at the end of May but last year it was about a week later. The grass just wasn’t ready, so we waited. It was cut by a contractor using a spreader mower and then tedded out within a few hours of being cut.

“The grass was going into the clamp in less than 12 hours and yielded about 900 tonnes from the 115 acres,” says Mr Bretherton, who uses an additive on his silage..

“We felt confident about reducing the bought-in energy to reduce feed costs, but we maintained the protein level of the diet. Dry matter intakes increased to about 32kg a head a day – that’s up by about 6kg compared with the previous year. Cow health has been good and we’ve been seeing heats more readily. By January we only had one cow that was unserved at over 60 days.”

EnviroSystems consultant, Paul Rogerson, says the enzymes Mr Bretherton has been using in his silage have helped open up the fibre structure (NDF), improving the fermentability and making more nutrients and energy available to the cow.

“By making the silage more fermentable we’ve reduced the lag time (speed of silage throughput in the rumen) which leads to increased dry matter intakes and makes more nutrients available to the cow.”

Liz Russell of EnviroSystems adds that when grass for silage is cut at two to three inches and as early as possible in May, there is more rapid regrowth to provide a second cut that’s the same high quality as the first.

“Silage treated with an additive retains more plant juices, which increases intake levels. Clamps should remain unopened for up to two months, or longer if possible, to maximise the stability and nutrient availability of the silage. This reduces waste and leads to more milk being produced from forage,” says Ms Russell.

Some additives also don’t contain lactobacillus, which is important to note as, according to Ms Russell, silage can actually be made without an additive containing lactobacillus because it is already present on the grass. “There’s no need to add more as it only creates too much grass sugar that turns into lactic acid.”

And by getting the additive right, volatile N fractions – which are often lost during silage fermentation – can be captured.

“This ensures the true protein content remains very similar to fresh grass. NDF only has about three to four hours in the rumen, so we want to make the nutrients easily available to the cow prior to her eating the silage.

“The enzyme needs time to work in the silage pit and this is where farmers can really influence and manage the nutrient availability of their silage. Treated silage left in the pit for three months or more will have an increased fermentable NDF, compared with fresh silage, which can be potentially worth up to two litres more milk a cow a day,” she says.

Summer grazing at Fellside Farm is based on a system of nine paddocks. Although no re-seeding has been undertaken for many years, last year’s grazing regime was modified.

“We used to turn out all the cows during the daytime in summer, but housed the herd at night. Last year we decided to keep inside all the cows that calved from Christmas to May – day and night – and turn the rest of the herd out day and night.

“Most of the herd calves between June and the end of the year, so we decided that as cows and heifers calved we’d keep them inside instead of turning them out to grass. The newly-calved heifers really showed a big improvement, with the best giving 700 litres more than we’d normally expect.

“We had 32 heifers inside at one stage and not one was giving less than 30 litres a day – and they were calving at age two,” says Mr Bretherton.

“The silage was clearly able to provide the cows with the energy they needed and that meant we could start saving on feed costs. In total we saved £30 a cow over 200 days.”