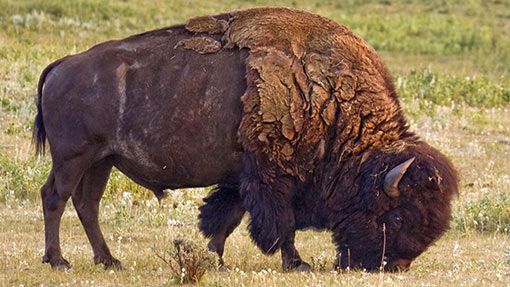 An award-winning herd of Scottish bison faces slaughter unless it finds a new home, say its owners.

Scott Shand and his wife Shelagh established their Caledonian Bison company at Muchalls, near Stonehaven, Aberdeenshire, in 2005.

Since then, the herd has expanded to more than 50 animals, winning the Grampian Food Forum Innovation Award in 2012.

But the couple say the venture hangs in the balance after a series of setbacks trying to relocate the herd of American plains bison.

The herd was due to move last year to the Ballogie Estate, between Banchory and Aboyne.

But the Caledonian Bison website says the estate had a “change of heart and decided not to go forward with the proposed bison venture”.

The Shands then decided to invest “everything we had” in purchasing their own small holding. But just as they were about to move, they were told the land was no longer for sale.

Mr and Mrs Shand say they were given until March this year to remove their animals from the estate but face “unaffordable penalties” if the animals remain beyond April.

The couple have used their website and social media to appeal for anyone to get in touch if they have with facilities and ability to take the animals.

They say they need some 60ha of well-fenced land but any help is appreciated.

“This has left us absolutely backed into a corner,” the bison website says. “Unless we can find someone who can take these animals our only option is to slaughter the whole herd.”

It adds: “We have done everything we possibly can to try and save these animals. They are now condemned simply because we do not have any land.”

The Ballogie Estate was contacted by Farmers Weekly but declined to comment on the situation, saying it had no prior knowledge that details were to be posted on the internet.