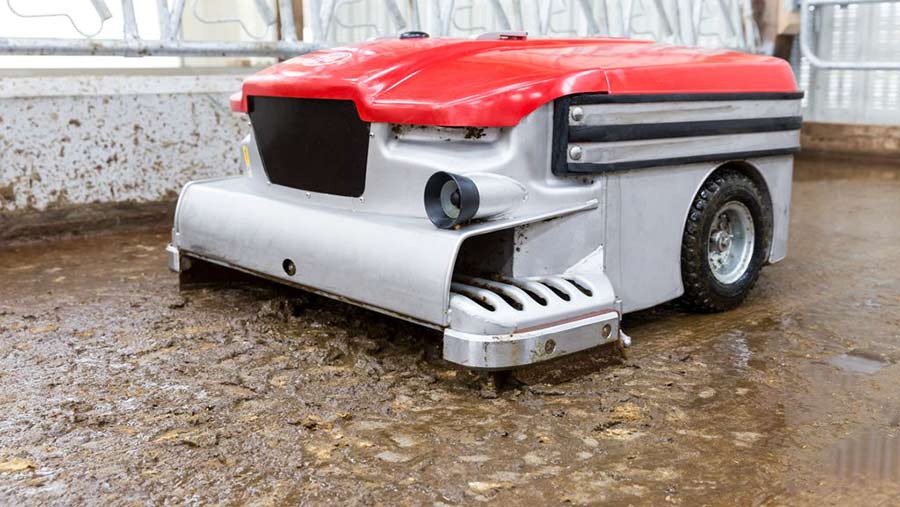 “After we installed the robots, the cows moved to being indoors year-round,” he explains.

“This obviously meant a lot more slurry in the sheds and to scrape it out we had to either dodge around the cows or drag them out line by line to get in and clean out properly – both of which were time consuming and causing major disruption to the herd.”

As well as concerns over labour and cow welfare, the combination of being indoors and an increased exposure to slurry also put pressure on animal health.

After a family member pointed out the Lely Discovery Collector robot, Mr Davey began looking into whether the technology could provide the solution the farm was looking for.

He purchased the first robot collector in October 2018, followed by a second a month later.

The robot works by following a preset route, which at Higher West Town Farm means scraping the cubicle passages eight times a day and the feed lines three times a day.

“There is a block of wood at the end of the passageway which the robot bumps into to know it has got to the end of the line. It then changes direction and comes back the other way before emptying into the slurry pit.”

At 3ft wide, the Discovery Collector uses a vacuum to suck up slurry rather than simply scraping like conventional automated scrapers.

The benefit of this is that it removes more of the slurry from the shed floor, improving hygiene and animal health, explains Mr Davey. 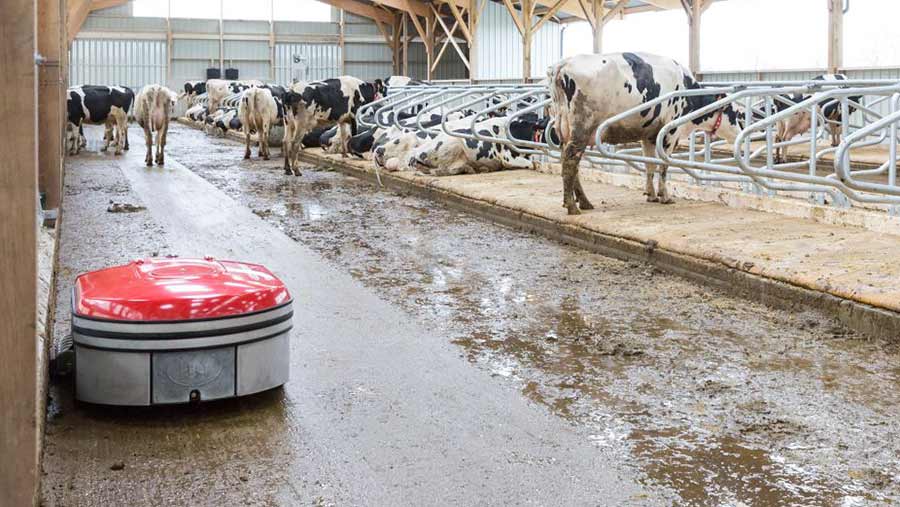 “While it would be impossible to remove every single bit of muck, there is no doubt that the robot does a very good job.”

Despite initial concerns about how the herd would react to the introduction of the robot, they settled very quickly, he adds.

“There were one or two [cows] that were initially spooked by the robot and a bit nervous, but they settled very quickly and now move out of the way when they see it coming. It is definitely less disruptive than going in every day with a scraper tractor.”

While it is still very much early days in terms of monitoring the investment, the farm has already seen significant improvements in both labour and cow health.

“Since purchasing the robots, we have reduced our mastitis cases by about 50%,” explains Mr Davey.

“Now we are only treating around six cows per month, which is a real improvement.”

As well as helping to slash mastitis, the robots have also been a very useful addition to the farm’s lameness strategy.

“We take a preventative approach to lameness and have a foot trimmer in every week to routinely trim 14-18 cows.

“Having the robots and less slurry on the floor is another way of tackling this – it is all part of the bigger picture.”

The farm has also seen a positive impact on labour.

“We have four permanent members of staff; myself, my wife and our two daughters and two part-time relief staff,” says Mr Davey.

“Now we have the robot scrapers, we only need to go into the shed to feed the cows – they are definitely saving us a lot of time.”

The cost of a Discovery Collector comes in at about £25,000.

However, the farm was able to get partial funding – around 40% – through a productivity grant.

“It is definitely worth the investment. It’s too early yet to give any kind of indication on maintenance costs but we have definitely saved on both labour and animal health costs.”

Though not an avid technology lover, Mr Davey believes embracing technology on farm will help to promote a better work-life balance, as well as encouraging others into the industry.

“We start at 7am and I want everyone finished by 5pm,” he says.

“Technology definitely makes life easier, and if you want to encourage people into the industry and create a better work environment, you have got to embrace it.

“Having that work-life balance is becoming more and more important – it’s essential to make sure you have a life outside of work.”

Rather than pushing manure like most automated slurry collectors, the Discovery Collector uses a vacuum pump to collect the manure in an internal tank, before disposing it at the end of the route.

“The body is made entirely of stainless steel with a manure tank capacity of more than 300 litres and an energy consumption of about 3KW/day,” explains Thomas Nugent, aftermarket manager at Lely. 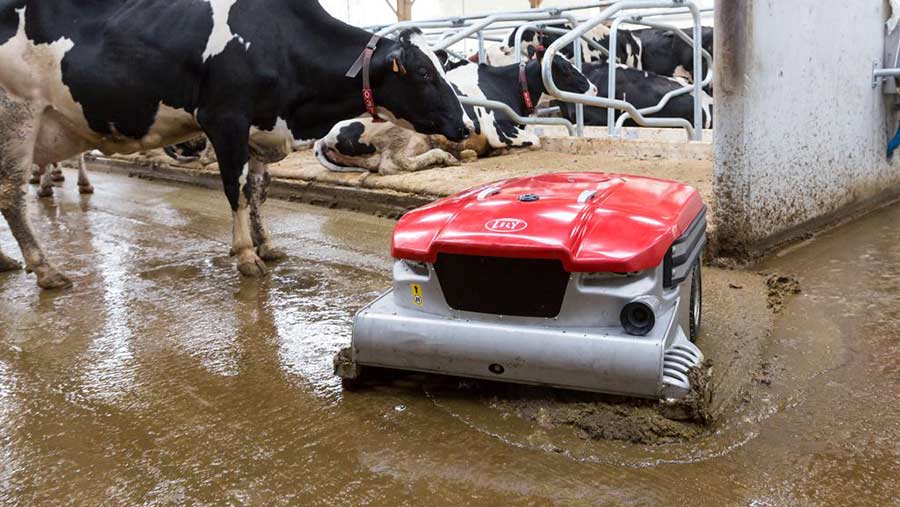 “It offers flexible cleaning zones and multiple route possibilities to fit in best with the daily routine of the cows and the farmer.”

As well as a better removal of slurry compared with conventional methods, the Discovery Collector also features a water spray system, using a front nozzle for better cleaning of the floor and a rear nozzle to prevent the build-up of a slippery film layer, he adds.

For those who are hesitant towards technology, operating and programming the robot is very simple, says Mr Nugent.

“The control system features a very user-friendly interface and routes can be programmed by the touch of a button on your smartphone.

It has been designed in such a way that it is efficient, compact and as animal friendly as possible.”