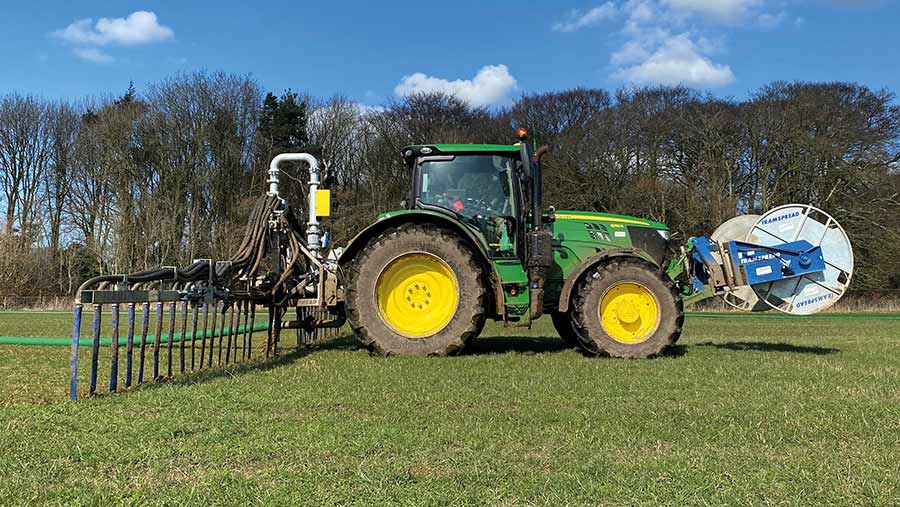 Following access to grant funding, the college invested in John Deere’s HarvestLab tool to see if technology could help cut carbon emissions on the journey towards net zero.

The technology uses near-infrared (NIR) spectroscopy to enable the make-up of slurry, silage and/or harvested crops to be analysed using one internal sensor.

Ruari Martin, farm director at Myerscough College, explains how it works and the benefits it has brought.

“We used to run the farm as three separate businesses – dairy, beef/sheep and arable – but are now moving towards a one-farm, multi-enterprise approach.

“We’re using waste products from one enterprise to feed into the others. For example, the muck from the cattle business is feeding into the arable crops, which then go back into livestock diets.”

The aim is to be as self-sufficient and resource-efficient as possible by using holistic farm management.

This involves employing precision agriculture in a grassland context, pulling technology such as GPS mapping from the arable sector – and applying it to grassland. 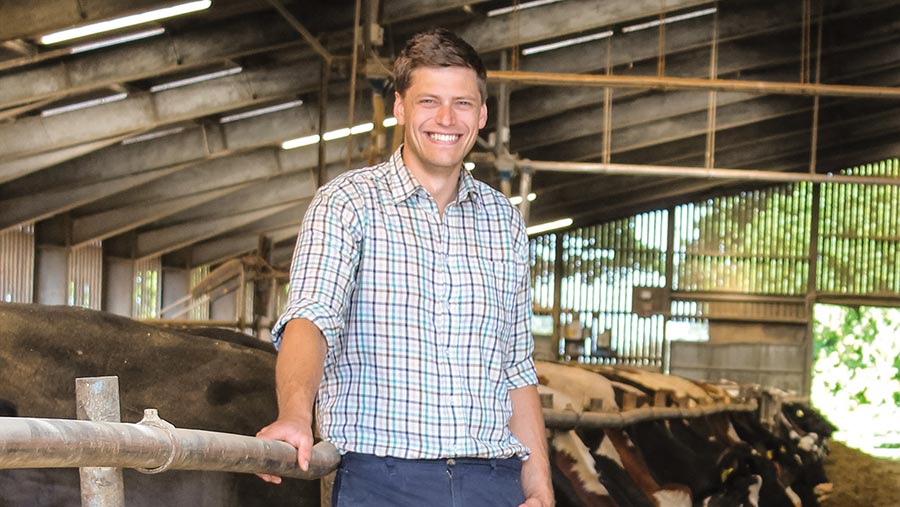 How it is used

NIR technology allows the farm to see a real-time analysis of the nutritional value of slurry as it is applied.

To make best use of the technology, soil samples were taken from every field and the farm was zoned based on the results.

Contour maps were then created so that variable-rate prescriptions could be produced. This level of accuracy enabled not only a field-by-field approach, but also a section-by-section one where required.

This is where HarvestLab comes in, explains Mr Martin. “We have a tanker with a dribble bar that it can sit on, or we can mount it on the umbilical system we bought as part of the grant funding project.”

He says the technology provides key statistics, including the volume, dry matter (DM), nitrogen, phosphorous, potassium and ammonium nitrate levels that are being spread as the application kit is travelling.

The whole farm is mapped on John Deere’s operations centre, which then automatically records this slurry analysis and produces the variable-rate application maps.

This means that as the NIR system analyses the slurry, it can alter the speed of the tractor and apply the correct amount of nutrient for that area of the field – increasing efficiency and minimising waste or the risk of overapplication. 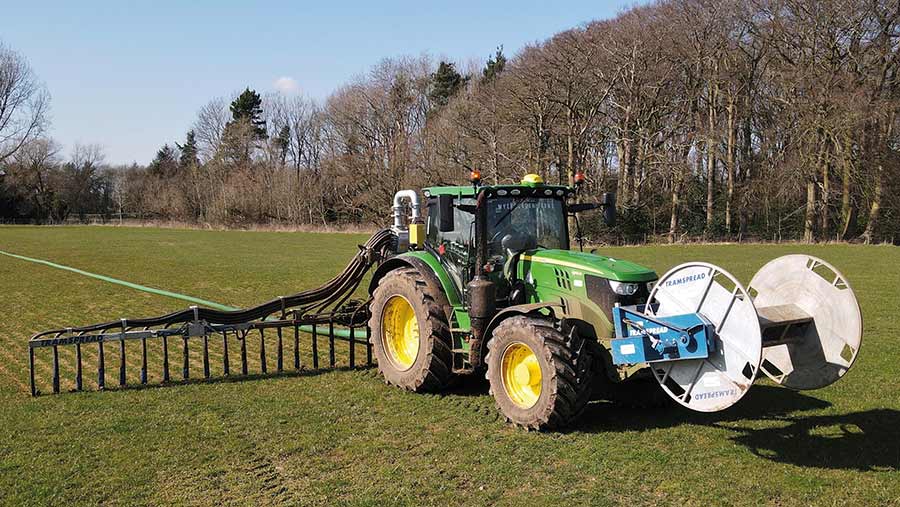 Real-time analysis in combination with soil-sampling data is enabling better use of slurry, which Mr Martin says is a very valuable resource – particularly in a multi-enterprise farm.

The technology also helps keep associated emissions down where possible.

“We are hoping to see a reduction in the total amount of nitrogen we use – but we will also be targeting it better across the farm to get more even cropping, as well as making improved precision use of the slurry,” he says.

What’s more, an accurate slurry analysis means less reliance on the RB209 guide. “The average DM of our slurry is 1-2.5% – as opposed to 6% referenced in the guide – largely due to rainfall entering the lagoons. Knowing exactly what is in our slurry allows us to apply more than we could if we were relying on guesswork.”

How it is used

The HarvestLab can also be mounted on a forage harvester to enable the farm to analyse grass, wholecrop or maize at harvest time.

At the moment, Mr Martin is using it just on grass, but he aims to expand this to wholecrop in the future.

The analysis provides detail on metabolisable energy, sugar, protein, fibre and DM, as well as wet and dry yield from the field on a metre-by-metre basis.

The first benefit of real-time analysis of forage is that the farm can use the results as a management tool.

“Because of the way the variable-rate nutrition is done via the slurry analysis and nutrient mapping, we are able to conclude that any variation in yield has not occurred as a result of the nutrition.

“This means we can bypass this as a possible cause and instead focus on aspects such as compaction of the soil or a drainage issue in the field to rectify this ahead of next season,” explains Mr Martin.

The analysis can also be used to identify which grass leys need reseeding or rejuvenating.

“For example, on a five-year mix, where you would assume at the end of that time period you would need to plough it up and resow, we are finding that our analysis shows there is still plenty of life left in it – which cuts our costs and labour.”

Thirdly, Mr Martin knows the nutritional value of what is in the clamp on the day of harvest.

“Rather than having to wait six to eight weeks for the grass to ferment, [then] take a sample to formulate the winter ration based on the result, and then forward-plan for what raw materials/compounds we will need, we are able to do that ahead of the game.

“We did some work with a nutritionist looking at fluctuations in raw material prices over the six-week period following harvest. Based on last year’s prices, we estimated we could have saved £100 a cow if we had known what we were working with earlier on.”

The near-infrared technology was bought with funding from the Department of Education, which the farm bid for as part of a Lancashire College Consortium Skills Acceleration project.

The resulting Lancashire Skills Development Fund is an £8.5m carbon reduction project led by Myerscough College on behalf of the Lancashire Colleges.

The pilot project is exploring how education providers can work together with employers and other partners to respond to local skills and innovation priorities.

The aim is to invest in “off-the-shelf” technologies and to test their commercial value to help growers reduce their emissions or better manage their carbon footprint.