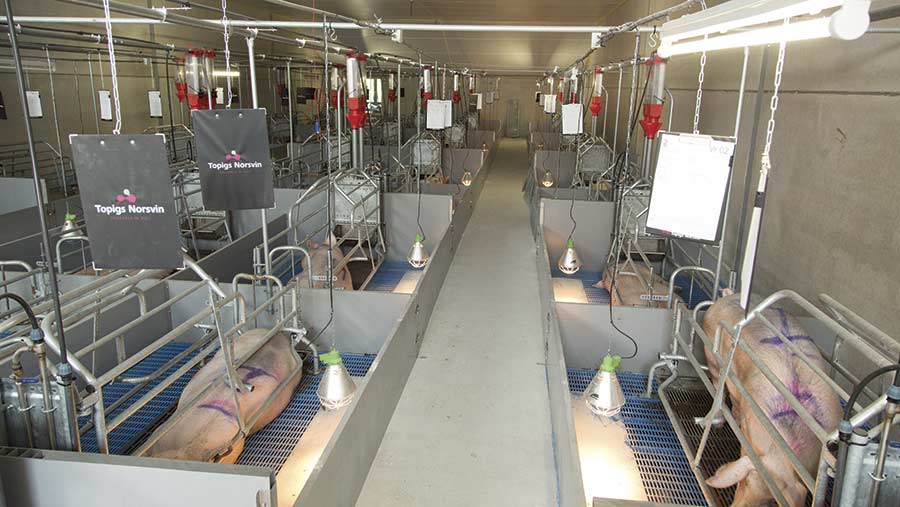 Slurry cooling technology is an effective way to reduce ammonia emissions from indoor pig production, and the heat recovered can be used elsewhere on the farm, reducing bills and cushioning impacts of future higher energy prices.

Agriculture has a large part to play, as it accounts for 88% of total UK ammonia emissions.

Agricultural engineering and environment consultant Nigel Penlington explains more about slurry cooling. He sees it as a good option for pig producers investing in new buildings with underfloor slurry storage.

What slurry cooling does

Lowering the temperature of slurry reduces the release of ammonia from urine. Temperature is one of three key factors that affect ammonia release, along with pH and the concentration of urea in urine.

This means that slurry cooling reduces ammonia emissions at source, as opposed to other technologies such as air scrubbers which remove ammonia as it exits the building through the fans.

The EU’s reference document on pollution prevention and control lists integrated slurry cooling and heat recovery technology as one of the Best Available Techniques.

A slurry cooling system uses a heat pump at its centre to exchange thermal energy, working in a similar way to a fridge. Energy gained from cooling the slurry is used to heat water. 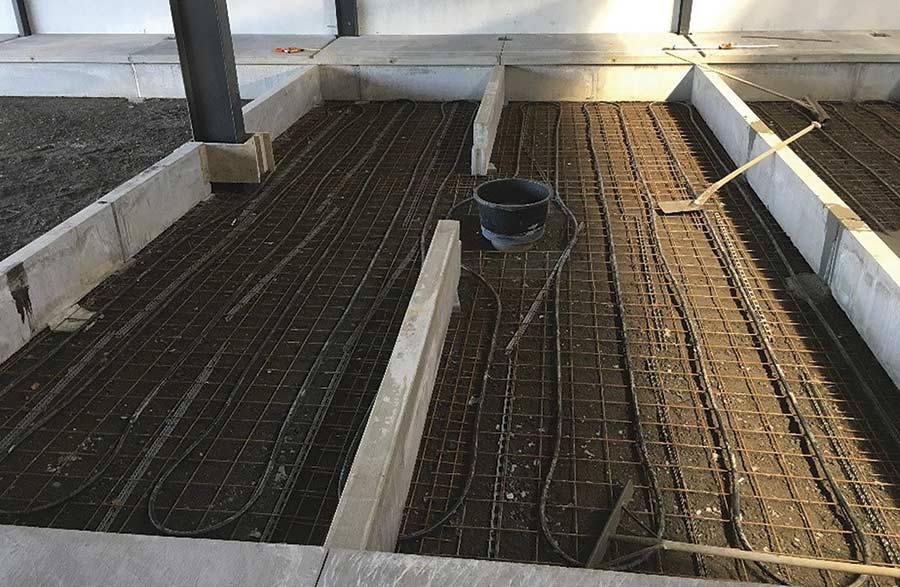 Cooling pipes and reinforcing mesh being laid down © AHDB

A closed circuit of pipes connected to the heat pump carries cold water through the base of the slurry pit or beneath a manure tray, reducing the slurry temperature, usually to below 12C (5C is the lowest practical limit).

Another pipework carries hot water, typically between 35-50C, around the building or to areas where the heat is needed.

Typically, plastic pipes for the cooling circuit are laid in parallel, fixed to a wire mesh and cast into the concrete of the slurry pit floor.

The heating circuit can be used to heat other buildings or areas directly, for example via underfloor pipework, or the heated water can be stored for use at specific times. 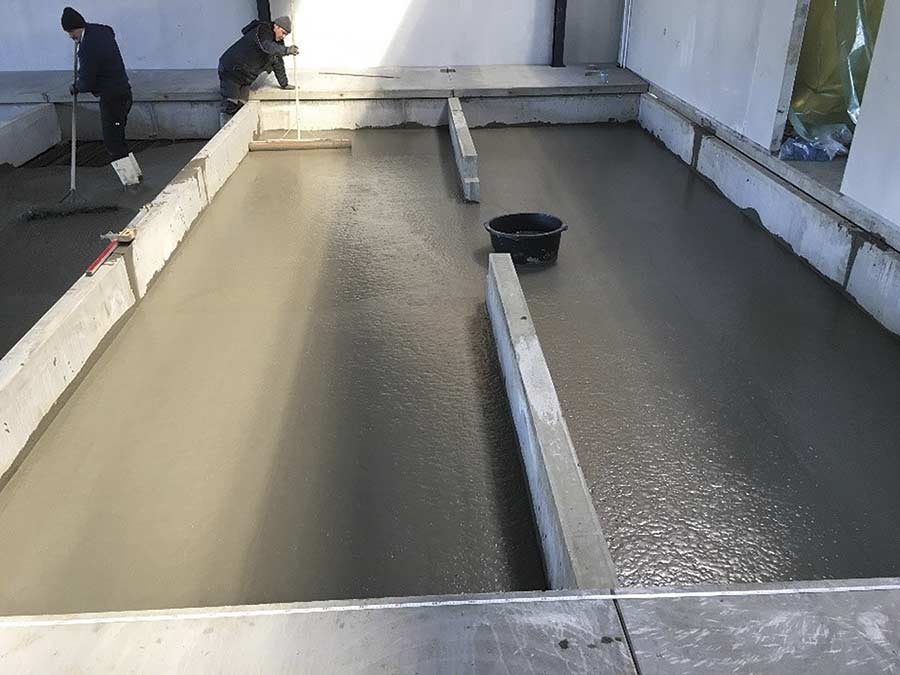 The tubing is buried under a layer of concrete

An experienced installer will need to plan and design the system specifically for your unit.

It is important to work out how much heat will be required so that the number of pipes cooling the slurry – the contact area – matches up with the heating demand.

As a rule of thumb, the area to be heated should be about half the area being cooled and from which the heat is harvested.

Heat recovered during the cooling process can be used to heat farrowing and weaning accommodation or other nearby buildings, saving energy costs and reducing exposure to energy price volatility.

Using the technology also means you may be eligible for the government’s Renewable Heat Incentive (RHI).

Because it reduces the amount of ammonia emitted at source, slurry cooling also improves the air quality inside the building as well as outside, bringing potential for improved pig health and performance.

Odour from the pig unit can also be reduced. There is also the potential to reduce electric fan use.

If the area to be heated is a long distance from where the slurry is being cooled, the pipework needed will make it more expensive and reduce efficiency.

Slurry cooling systems are not suitable for large slurry stores – they can only be used in housing where slurry is stored under slatted floors and removed fairly regularly.

Retrofitting slurry cooling systems in existing accommodation is possible but poses some challenges which are likely to make it uneconomical.

To install pipes in an existing slurry pit floor, all slats would need to be lifted and the floor made clean enough to screed it with new concrete to create a smooth floor.

It’s possible to tag pipes on to the existing floor but muck can get stuck around them, making them difficult to clean.

Slurry surface cooling fins are an option, where the cooling circuit runs through a floating heat exchanger, but there can be problems including crust formation. 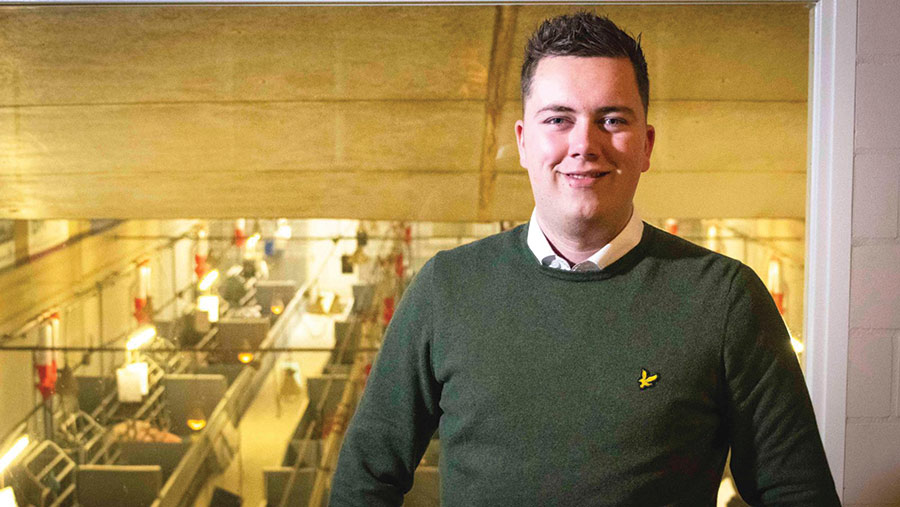 The 1,000-sow breeding unit in the south of the Netherlands built new farrowing accommodation with slurry cooling technology four years ago, after a fire destroyed the original building.

The farm’s training centre manager, Ruud van Loon, explains that the original building had an air scrubber system to reduce emissions but this was the source of the fire.

For safety reasons when rebuilding, the farm opted for slurry cooling.

Benefits and how it works
The farm says the slurry cooling technology promotes better air quality for both pigs and staff. It also lowers energy costs and allows more accurate temperature control.

Slurry is cooled to between 12C and 15C. Heat from the cooling system is used to heat the floor pads in the piglet creep areas: up to 32C when the piglets are newborn and gradually reducing to 25C.

“We check the temperature data daily to make sure the creep areas stay at the right temperature,” says Mr van Loon.

The system also heats the farm’s office, conference and training rooms, and the staffroom, which are all under the same roof as the new farrowing accommodation.

Mr van Loon says: “We installed the system ourselves and it cost us €750 [£635] per farrowing pen for the equipment and materials.

“The heat pump has a lifespan of 10-15 years and the manure tray 15 to 20 years. There is minimal maintenance and, so far, we are very happy with the system.”

Antibiotics use has been reduced to almost zero and sows are averaging 16 piglets born live a litter and 33 reared a year.

Entries are open for the 2022 Pig Farmer of the Year. Does someone you know deserve recognition for their hard work? Give them the chance to shine at one of the best nights out in the farming calendar and help to boost their career.
Enter or nominate now
See more
Share this
Advertisements