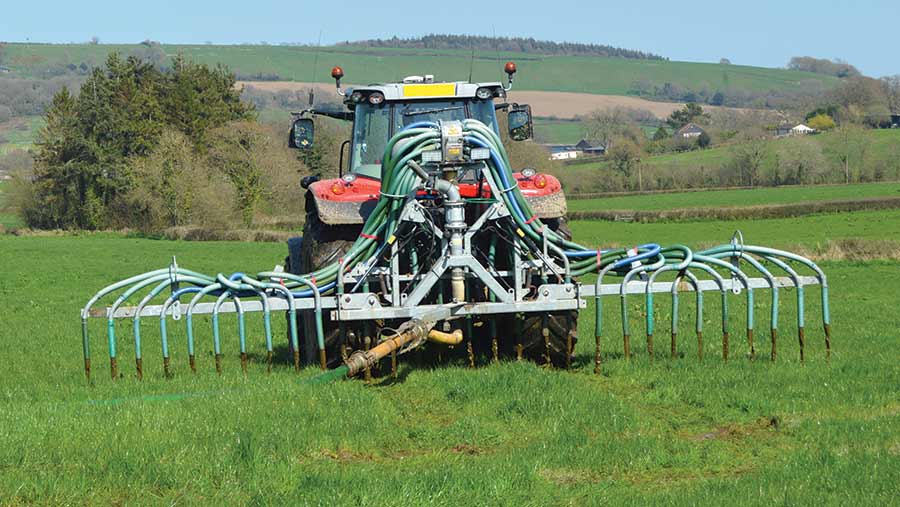 Dairy and beef farmers are likely to be most affected by Defra’s proposed controls for fertiliser, manure and slurry management and applications.

The proposals, which also cover livestock housing design and habitat protection, are part of a draft Clean Air Strategy, launched by Defra secretary Michael Gove on Tuesday 22 May 2018.

With the government’s current focus on improving air quality, agricultural environmentalists are urging farmers to get on the front foot when it comes to reducing emissions.

Ammonia, which can be emitted in the breakdown of livestock muck and slurry and the fertilisation of land, is not a greenhouse gas itself. However, in very particular circumstances it can be converted to nitrous oxide, which is a greenhouse gas.

Environmental considerations, including those relating to emissions, are already playing a bigger role in planning permission applications and the success or failure of a case often depend on them.

And as more farmers look to expand their business and make them fit for the next generation, emissions are going to become a key factor in the business’s planning strategy.

“It’s important farmers are aware of the huge impact these [Defra] proposals could have if implemented. Therefore it is key that farmers start to consider how they may reduce emissions now because growing public and government pressure is demanding better air quality,” explains Mr Penlington.

Six actions all farmers can take

Diet is the first place to start in this process, according to Mr Penlington. Feeding excess crude protein (CP) increases nitrogen excretion from animals and ammonia emissions. Ensuring protein levels in the diet are correct could also save feed costs.

Slurry testing allows better and more precise fertiliser planning so that applied nutrients match crop requirement. This allows soil reserves of P and K to be maintained, keeping the soil fertile and healthy.

“There are two testers. A simple hydrometer will give total N, P & K. The other type relies on a simple chemical reaction and provides the available N,” explains Mr Gill.

“The cost of these kits can be recovered in saving the purchase of 1t of nitrogen fertiliser.”

Once tested, the nitrogen available to the growing crop can be calculated, which is less than the total nitrogen in the slurry, as not all is in a form that plants can take up. Manner NPK software, which can be downloaded from the AHDB website, will do this calculation. And the AHDB Nutrient Management Guide (RB209) provides fertiliser recommendations for all key crops.

Using testing, Manner NPK, and then RB209 results in determining exactly how much purchased fertiliser needs to be applied, and when.  This can save costs, improve grass yield and quality, as well as reducing the loss of ammonia gas and nitrates into the environment.

The preferred methods for reducing emissions from muckspreading are slurry bandspreading (trailing hoses and shoes) and shallow injection. Many contractors are now offering these methods, so it may not be a difficult switch.

Reducing NH3 emissions is also possible via rapid incorporation of manure into soils.

Urea-based fertilisers are the main culprits of ammonia emissions when it comes to fertiliser use.

Research has shown about 20% of nitrogen content of applied urea is lost to the atmosphere as ammonia, although this can be reduced if applied shortly before rain or shallowly cultivated into tillage soils.

Alternative nitrogen fertilisers such as ammonium nitrate or inhibitor-treated urea reduce the losses of ammonia in comparison with urea fertilisers. The inclusion of a urease inhibitor with urea-based fertiliser has also been shown to reduce emissions by about 70%.

Reducing the amount of sitting manure and urine in buildings and yards can help reduce emissions. Therefore, increasing the frequency of scraping floor areas in cubicle housing as well as pressure washing collecting yards are effective methods.

By adding sulphuric acid to slurry to reduce the pH to 6 or below, it is possible to stop the ammonia reaction.

It might mean a bit more lime is required to balance soil pH when acidified slurry is spread, but it is one way of reducing ammonia emissions. 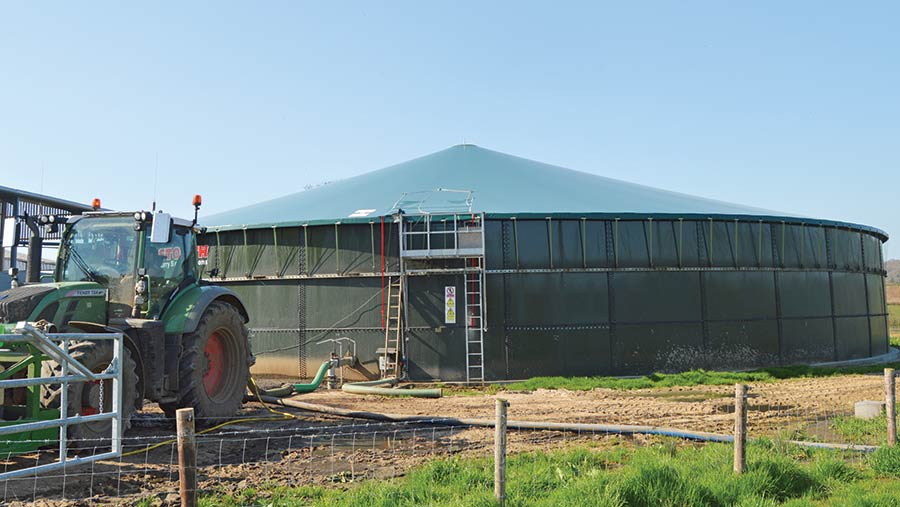 Three factors for consideration when planning the future of the business

Low-emission housing is actually likely to be better for animal health too because it is likely to improve foot health and lead to less mastitis, if managed well.

One option is to keep urine and slurry separately, Mr Penlington explains, which is possible with floors slightly sloping into slats or grooved floors with holes in. This is effective because ammonia is formed when urine and manure mix.

A compact covered collection yard will mean a smaller area to wash down and keep clean.

Covers on slurry stores not only reduce ammonia emissions from the tank, but also keep the rain out, meaning you are pumping nutrients rather than water, explains Mr Gill.

By increasing storage capacity for slurry rather than rain, you can save an estimated £1/cu m for storage and £1.60/cu m in contractor costs for spreading.

In addition, it reduces the amount of journeys required in spreading and reduces the odour of the store.

There are various different fixed and floating cover options, details of which can be found on the AHDB’s website (PDF). A cover is better than relying on the formation of a crust because crusts can be difficult to agitate and release a lot of ammonia in that process.

Similarly, it is possible to reduce ammonia from farmyard manure heaps by covering with a heavy-duty polythene sheet.

Slurry separation has many benefits, both in terms of reducing emissions and the amount of purchased fertiliser required.

Under new Defra proposals, all slurry and digestate stores and manure heaps will have to be covered by 2027. Fitting a cover to the slurry store at Hornshayne Farm, Colyton, Devon, has taken ammonia emissions from about 546kg to approximately 109kg.

The 80% reduction retains about 1,000kg of ammonium nitrogen within the slurry over a year, which is worth £700 as a nitrogen fertiliser substitute to farmer Andrew Hurford.

For the slurry produced on the farm annually, the cover increases the fertiliser value by 0.25kg/cu m. 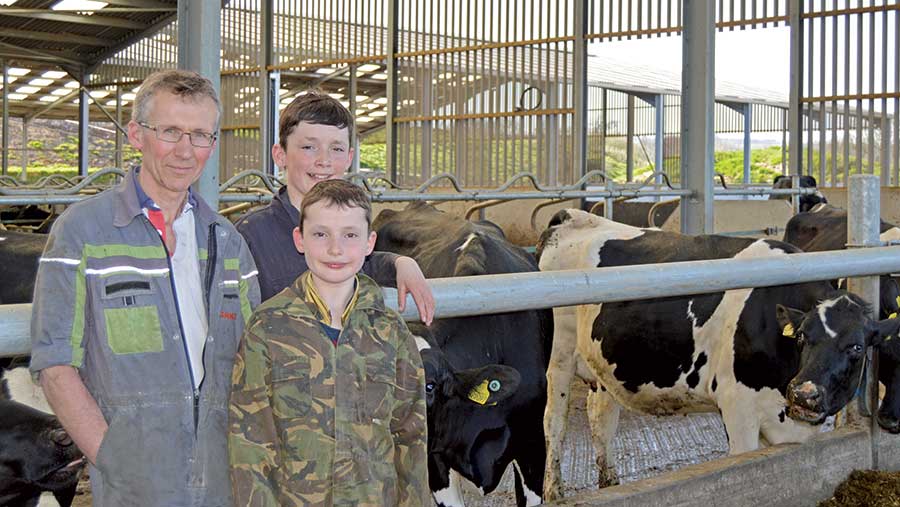 Andrew Hurford and his sons

In 2016, Mr Hurford had a fixed cover fitted to the 900,000gal storth slurry store at the farm. The tension cover is made from polyester woven fabric with a PVC covering to protect against slurry and UV light.

It was made possible by a Farming Ammonia Reduction Grant (Farg) that covered 100% of the £50,000 cost

“If you had done the cover at the same time as the store, I’m sure it would have been cheaper, but it worked out at half as much again as the store to retrofit,” Mr Hurford says.

“Covering slurry stores I’m sure is the right thing to do. It effectively makes my store 25% bigger,” says Mr Hurford.

For about six years, Mr Hurford’s contractor has been spreading the slurry with a trailing hose. In the recently published Defra plans, there will be a requirement to spread slurries and digestate using low-emission spreading equipment (trailing shoe or trailing hose or injection) by 2027.

By spreading slurry using the trailing hose onto long grass where the sward traps ammonia nitrogen and odour, ammonia losses are reduced by about 60% compared with a splash plate spreader, says Mr Gill.

The fertiliser value can be calculated using the free Manner NPK programme.

This shows that if the slurry contains 2.6kg of nitrogen/cu m, then spreading at the rate of 30cu m/ha the fertiliser nitrogen contribution is 25kg N/ha. This would be worth about £19/ha using a splash plate spreader.

Changing to low-trajectory, dribble bar and covered store over the growing season, an additional 6kg N/ha will be available, worth £4.2/ha. This covers the extra cost of spreading compared with a splash plate and provides additional savings to contribute towards the cover.

This would give a return on investment of the cover over 20 years.