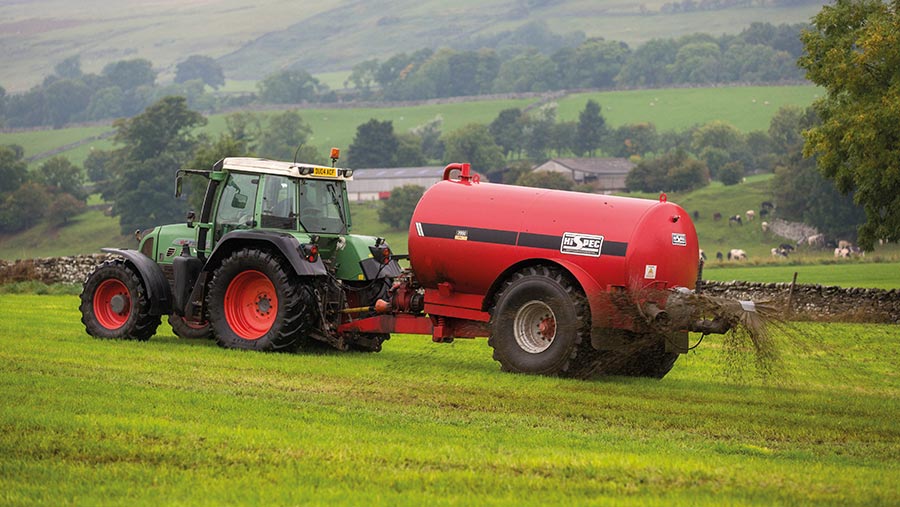 Farming is in the firing line as the Environment Agency adopts a tougher approach to protecting England’s watercourses from agricultural pollution.

Much confusion surrounds the new rules for spreading organic manures, which may prevent applications to fields in England this autumn.

While the guidance does allow the continued spreading of farmyard manure, slurry and digestate post harvest, it imposes conditions which many farmers believe are impossible to comply with.

We put various scenarios to Charles Bentley at the environmental consultancy Adas to find out how dairy farmers might be affected.

I only grow grass on my farm. Will I be able to apply organic and manufactured fertiliser in the autumn?

Yes, provided you can demonstrate the crop’s need for nitrogen based on recommendations in RB209 [the AHDB’s Nutrient Management Guide] and assuming you are outside a Nitrate Vulnerable Zone [NVZ], or the application is in accordance with NVZ guidelines.

The current recommendation on grazing ground typically allows no more than 30kg to be spread no later than August, and then only on better grass-growing sites.

This autumn you could potentially spread in accordance with the Environment Agency’s [EA] Regulatory Position Statement.

In this, the EA announced that until the end of February 2022, no enforcement action will be taken against farmers who apply organic manure exceeding the needs of the soil or a growing crop, provided there is no pollution risk and they inform the EA that they are doing it.

I understand I will need to have a Nutrient Management Plan (NMP). What is this and can I get funding to produce it?

An NMP is a document that demonstrates that manure and/or fertiliser applications have been calculated to match the needs of the crop.

The process and background information are contained in the relevant sections of RB209.

The process starts with identifying crop needs, given the proposed use and potential of the grass crop.

There is an allowance for the proportion of clover in the sward. For example, low-intensity grazing on old pasture in a low-rainfall area needs less nitrogen than multi-cut silage taken off a short-term ley.

Soil nitrogen supply based on previous field management is considered, and so is the contribution from planned applications of organic manure, with the balance expected to be made up with bagged fertiliser.

While it is unlikely that you will get funding for an NMP for the whole farm, you may be able to get help to allow you to put together your own plan through Catchment Sensitive Farming, if your farm has been identified as being at high risk of contributing to nutrient pollution.

Some water companies offer a similar service through their catchment management and engagement programmes.

The service would typically include analysis of five soil samples and nutrient recommendations for each of the fields involved.

This will provide a starting point – a template for you to complete your own plan.

How often will I need to show the EA that my farm has a need for organic and manufactured fertiliser in the autumn?

You will need to do this if and when you are inspected by the EA, or potentially as part of a Rural Payments Agency audit, as the Farming Rules for Water are part of cross-compliance.

Nutrient plans must be based on soil analysis which is less than five years old at the time of the calculation; in an NVZ, records need to be kept for five years.

The legal text of the Farming Rules for Water does not include any requirement for record-keeping, so it is not clear how compliance might be assessed outside an NVZ.

However, your farm assurance assessor will probably be interested in these details in the future.

What period do the spreading restrictions apply to?

Unlike the NVZ rules, the spreading restrictions don’t apply to a specific set of dates but to times of the year when the crop nutrient requirement is minimal and the risk of pollution when spreading is likely to be at its highest – that is, the autumn and winter.

There is flexibility, but the onus will probably be on the farmer to demonstrate that the risks have been assessed and that there is an established crop need.