Precision drilling liquid slurry directly beneath the maize seed could save on synthetic fertiliser and help water quality, industry-leading Danish research has found.

Leif Knudsen, chief adviser for the plant innovation department at Denmark’s knowledge centre for agriculture (SEGES), stressed that it was early days but precision slurry application looked to be a fruitful area for farm economics and water quality.

He told the Maize Growers Association conference at Stoneleigh on 7 February that Danish and German trials suggested there would be no yield loss from saving on starter DAP and using only slurry or digestate as a phosphate source. 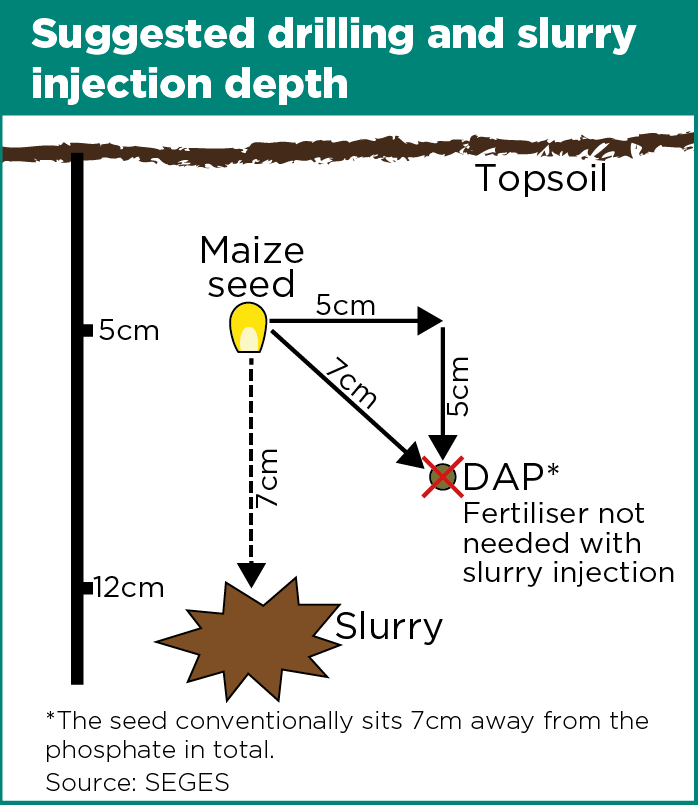 He said Danish SEGES trials and trials in Germany on light, strip-tilled ground had shown that no starter DAP was required if optimal slurry placement was achieved.

Combinations of injection ploughing, precision slurry placement, variable levels of slurry and spread slurry had been trialled, all with and without starter DAP.

However, he said the precise injection of the slurry and seeds was critical.

“Too close to the seed and the seed can be damaged, and too far away means it takes too long for the seed to germinate and benefit from the slurry,” Mr Knudsen said.

Increasingly restrictive water quality rules and guidelines mean that precision slurry injection could be a “huge area” of growth in UK farming, according to farm business adviser John Morgan of Creedy Associates and the MGA.

Mr Morgan told Farmers Weekly that last year’s water prevention rules and the 25-year Clean Air Strategy from Defra were ramping up the pressure on farmers to look at phosphate leaching.

Factors to consider to reduce nitrogen leaching from maize

“There’s a lot of evidence that maize responds well to phosphorous close to the seed when it’s just germinated,” Mr Morgan said.

“When farms apply slurry or digestate at a reasonable rate they very often apply all the crop’s phosphate requirements, so it’s a time-saving, environment-saving benefit and in many cases the bought-in starter phosphate may not be needed.”