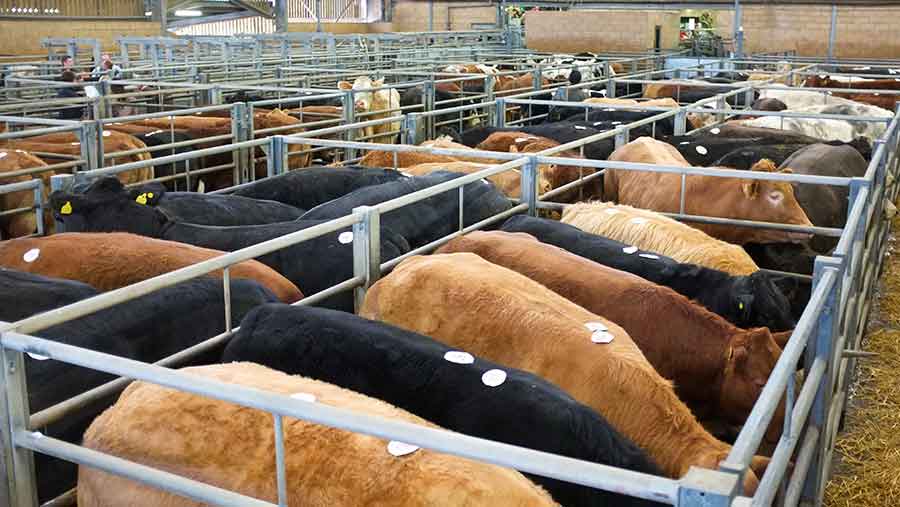 Falling prime cattle prices were supported by tighter supplies last week, with some marts reporting a flying trade, although only heifers were dearer on the week for Britain as a whole, lifting to 209.88p/kg, reports the AHDB.

Bull prices steadied at 185p/kg and steers continued hovering around the 195p/kg mark, averaging the week at 193.36p/kg across British marts.

Vendors that successfully battled the snow were handsomely rewarded at Darlington on Thursday (1 March), as a much-reduced throughput lifted prices by 11.3p/kg across the board.

A yarding of 38 bulls levelled at 197.1p/kg, which was slightly back on the week, with 66% fewer going under the hammer. Bulls topped with a homebred Limousin from P&E Ellis, Lisern Farm, at 237p/kg (£1,464), while the top grossing bull was another Limousin from AG Watson and Son, Nunstainton Grange, at £1,710 (Darlington Farmers Auction Mart).

Snow in the East Midlands almost halved cattle numbers on the week at Newark on Wednesday (28 February), where 116 prime cattle lifted 6p/kg on the week to make 205p/kg, of which 34 were bulls at 188p/kg.

Native-sired bulls topped at 211p/kg (£1,413), with a Hereford from Bob Holmes, High Offley. Dairy bulls peaked at 217p/kg with Montbeliardes from Rob and David Adams, Stoke-on-Tern.