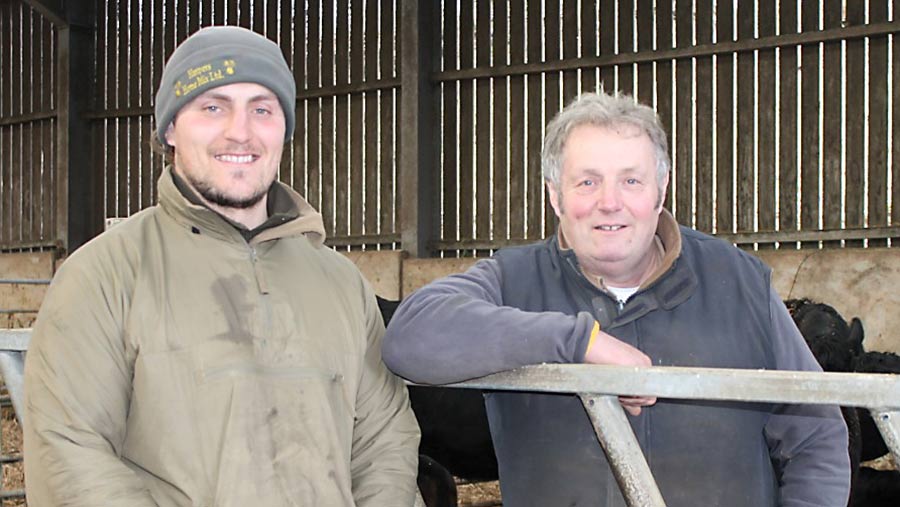 One farming family in Somerset is preparing for Brexit by adopting a low-input, high-output system.

Having spent some time in New Zealand, David Edwards is implementing a number of changes at the family farm near Exford, including new breeding, outdoor lambing and rotational grazing.

The changes are already having an impact on production costs and productivity, and – combined with drone technology and closed-circuit television – are proving nicely labour-saving, too.

“After Brexit, the price for finished or store lambs is not going to get vastly higher, but it could go down,” explains Oliver Edwards, David’s father.

“We need to look at our cost of production.”

To reduce costs, the Edwards have recently switched to lambing their 500-head flock outdoors.

Housing sheep over the winter costs about £20 a head in straw, feed and labour, whereas keeping them outdoors costs around £1.50-£2 a head. This represents a big cost saving, says Oliver.

Oliver and David have lambed some of their ewes outside for the past two years, and have noticed the outdoor lambs are far more vigorous than those produced indoors.

“Inside, there’s a lot of handling and disturbance, whereas outside we’re checking them three times a day and leaving them to it,” says Oliver. “There’s less stress and disease, fewer abortions and prolapses, and the lambs don’t get a setback at turnout.”

Until recently, the family kept Cheviot ewes, which they put to a Teeswater ram to produce a Mule. They were then mated to a Suffolk or Texel terminal sire.

“Teeswaters are a hardy, prolific hill breed, but David wants even stronger, hardier sheep for the new system,” explains Oliver.

Instead, they are now using a New Zealand Romney on the Cheviots, to get a Perendale. They are only a couple of years in to the new breeding programme, so the first Perendales won’t go to the ram until this November.

What ram will they then go to?

Initially, David only lambed Cheviot ewes carrying singles outside – and found he had to be careful not to feed them too much. “They got too big in the first year, so they only get grass now.”

This year he is lambing doubles outside in April – on grass and some hay – and may also try some Teeswater Mules.

It has been a difficult transition in some ways, as rather than selling fat lambs or stores in the autumn, the Edwards have kept all ewe lambs back for breeding. “But there’s no research and development work going on, so we have to experiment ourselves,” says Oliver.

He weans the lambs in August, without creep feed, and will wean early if there’s lots of grass.

“We strip graze the ewe lambs on kale over the winter, and bring them in for one week to get them used to silage, as we have had problems where they won’t eat it,” adds David, who says this is done in case they need to be brought indoors over winter and fed silage.

“We’re also going to put a big management tag on [replacements] so it’s easy to identify them outside from a distance. That way we can pick out the really good ones to keep and the poor ones to sell.”

With 121ha of forestry and moorland running up to 1,400ft above sea level, to make life easier, David and Oliver use a drone to check on the animals – and can even use it to round up the stock.

Oliver’s love of technology has also extended to the 60-cow pedigree Aberdeen Angus herd, with CCTV in the cow shed linked to his mobile phone. “I can zoom in and see exactly what’s happening at any time of the day or night – it’s a really useful aid.” 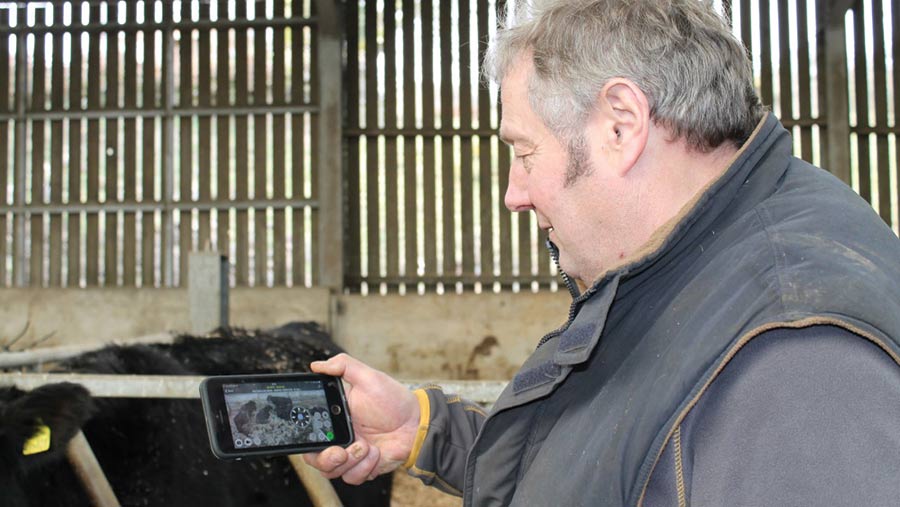 Heifers calve in March and cows in April, all on straw yards inside, and this year Edward grazed replacement heifers on kale over the winter to try to reduce costs.

“It’s been one of the wettest years we’ve had, but they have still put on 0.5kg a day. And it’s cost us nothing in straw, which would otherwise have been one round bale every other day at a cost of £100/t.”

All the cattle get round bale haylage over the winter, as Oliver likes to keep his cows fit, not fat, to get small live calves that will get up and sucking quickly.

He keeps all his own replacements, and sells in-calf or bulling heifers depending on whether the farm is TB-free.

“If they’re not fit for breeding we’ll sell them as weaned calves or stores along with the steers. If we go down with TB we’ll finish more, but we finish very few these days,” he explains.

The farm also has a campsite and holiday cottages, so the Edwards have to time the farmwork so it doesn’t clash with busy holiday periods.

“I would love to calve outside, but it would mean moving calving to May, which just wouldn’t work,” says David.

To make the most of his grass, David has trialled rotational grazing – with great success.

“We have a 5.3ha field which I split into 30 cells for 25 heifers with electric fencing. I moved it every day, along with a portable water trough. We definitely had more grass and the cattle did better, putting on 1kg a day,” he says.

“It was good for weed control, with less picky eating, and the worm count fell to nil.”

The grass grew so well that he shut up 18 cells for silage – and the field provided 30 days of grazing, rather than 15 days set-stocked.

“This year we’ll put the cows and calves in there with the bull, so the cows will be on a rising condition plane, which will hopefully give us a tight calving window.”

A similar system, grazing ewes and wethers on plantain and clover, also worked well and will be repeated this year.

Oliver and David attribute a lot of their success to sharing tips with other farmers around the world through farm walks and social media.

“You know you’re not on your own – we all share tips and advice, and there’s a forward farming group for young people to help them drive the business on. We’ve got support payments until 2022 – we want to be already in the position to farm without them if they pull the plug.”