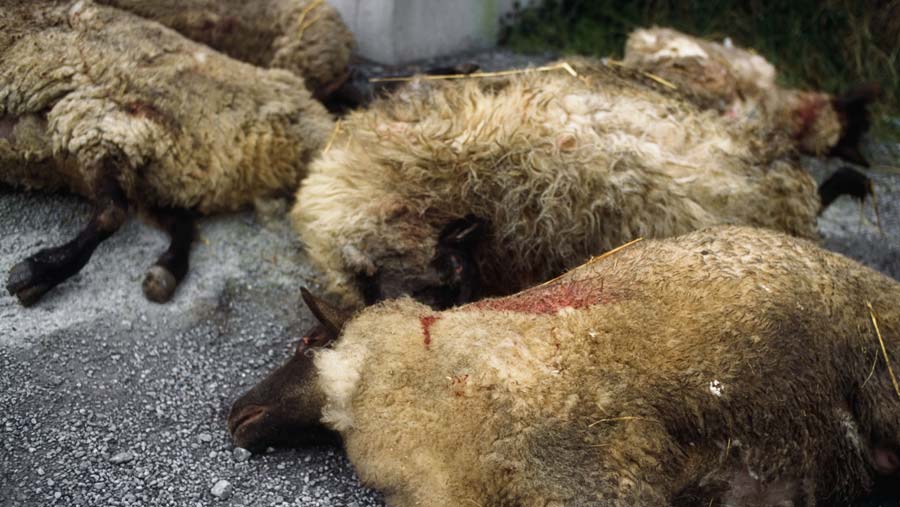 Dog attacks on sheep are unacceptably high across the UK – despite public awareness campaigns.

Figures Farmers Weekly has obtained on sheep worrying attacks across the country from 2015-17 reveal the problem is endemic across the UK, on average resulting in one dog shot dead each week.

Our investigation suggests significant under-reporting by farmers, so in many counties recorded incidents are likely to be the tip of the iceberg.

Rural policing budgets are stretched and forces struggle to properly investigate incidents. And only on rare occasions are dog owners brought to justice for sheep attacks committed by their out-of-control pets.

Even when suspects are named and victims give statements, dog owners are often let off the hook because of insufficient evidence.

How police are tackling the problem

Our findings suggest that, although some police forces are making the right noises about sheep worrying, many are still failing to respond effectively.

Some forces, including North Wales Police’s Rural Crime Team, North Yorkshire Police and Police Scotland, should be praised for their dynamic social media campaigns to inform the public about the consequences of sheep worrying. They also mete out appropriate punishments and rehabilitate offenders.

But others – including Derbyshire Constabulary, Staffordshire Police and South Wales Police – are failing to prosecute offenders.

For example, Staffordshire Police recorded 39 reports of sheep worrying between 2015 and 2017. Seven of these were recorded as “crimes”, while a formal complaint was recorded as “criminal damage”. None of these incidents led to a prosecution, however.

See also: The law on shooting dogs on your land

Derbyshire Constabulary recorded 149 dog attacks on sheep over this three-year period. In total 116 sheep were killed and 45 were injured. Police said the true figures were likely to be higher as some were listed as “some killed” or “sheep found dead”. Not a single case resulted in a prosecution.

In January, Farmers Weekly sent a request under the Freedom of Information Act 2000 to 43 police forces in the UK asking them to provide data on:

Thirty-five out of 43 (81%) responded with relevant information. Eight police forces did not provide information, either due to high costs/time, including the Police Service of Northern Ireland, Thames Valley Police, Hampshire and Lancashire constabularies.

Statistics varied hugely across Yorkshire. West Yorkshire Police recorded 24 cases of dogs worrying/chasing sheep in 2017. As a result, 27 sheep were attacked/injured, 16 were killed and four dogs were shot.

South Yorkshire Police recorded no incidents in 2015 and only four in 2016, resulting in 10 sheep injured and one killed. Similarly, only four incidents were recorded in 2017.

North Yorkshire Police did not reveal how many incidents have been reported over the three years. However, it said five individuals were charged with offences from 2015-17.

The force is part of a five-strong group – including Devon and Cornwall, Sussex, Hertfordshire and North Wales Police – that is trying to tackle the problem. It is pushing for changes to the law, including making dog attacks a recordable crime, giving police powers to seize dogs, the creation of a DNA database for offending dogs and harsher sentences for owners.

In the wake of a number of serious incidents, a campaign launched by NFU Scotland, NSA Scotland, Scottish Land and Estates, Police Scotland and others runs until the end of May.

According to Police Scotland, there were 130 cases of livestock worrying in Scotland last year – down from 179 in 2016. Inspector Jane Donaldson, Police Scotland’s rural crime co-ordinator, said: “While reported livestock-worrying crimes reduced last year, we remain focused on and committed to reducing these incidents further.

“Our crime figures show the vast majority of these dog attacks are on sheep and that incidents rise over the spring months.”

The scale of dog attacks in North Wales is the highest among all forces. From September 2013 to July 2017, 648 livestock (mostly sheep) were killed and 376 injured.

A total of 52 dogs were shot – again, the highest number recorded by all forces. About one-quarter of the 648 incidents (169) involved escaped dogs, and in 89% of cases the dog owner was not present.

The National Sheep Association (NSA) says it is vital farmers report incidents to build a true picture of sheep worrying and add pressure to police and the law courts to respond better.

NSA chief executive Phil Stocker says: “Victims need to detail the emotional and financial impact of sheep worrying. But I can understand why many farmers have given up, as the police response is often inadequate.” 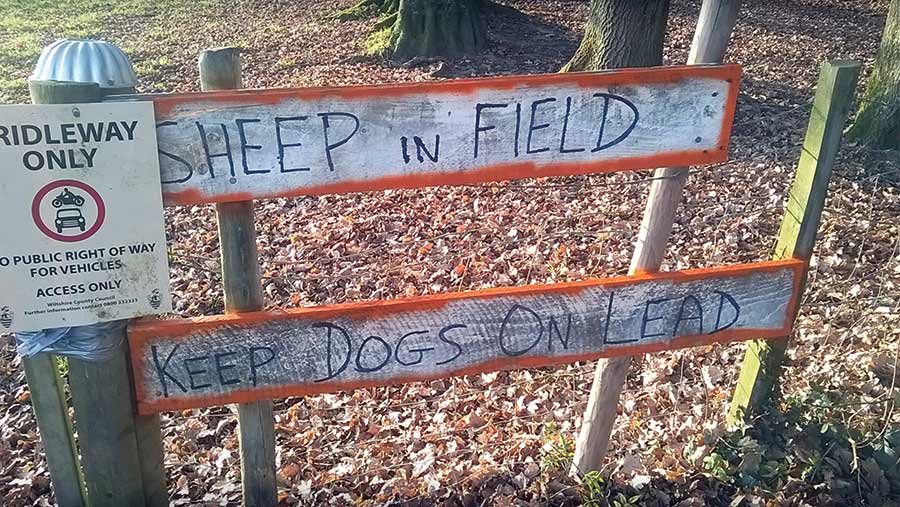 Wiltshire sheep farmer Tim White uses Facebook to inform his local community where his sheep will be and to remind them to keep their dogs on leads near livestock.

Mr White, who farms 1,000 Exlana sheep near Warminster, used to see about 40 dog walkers in the space of an hour on Martinsel Hill, where he keeps his flock.

“I would ask them to put their dogs on a lead, but I was getting nowhere,” he says. “But it all changed after I started putting up large home-made signs on gates and telling people on Facebook where the sheep are kept.”

Now he says there are far fewer dog walkers in the area and the number of attacks have reduced dramatically. He also thanks dog walkers on Facebook for acting responsibly, which gets dozens of “shares” and “likes”.

For example, he posted this picture on his Facebook page on 17 January alongside the message: “Please note there are sheep on Martinsel Hill. Please keep your dogs on leads. Many thanks for your co-operation.”