Continued pressure in the finished sector and doubts over Brexit cast a shadow at Stirling this year, with averages back £1,009 in the Simmental ring on Thursday (23 October).

Bull buying budgets were definitely hit, although the breed still saw several five-figure prices and sold the most bulls overall.

This is according to British Simmental Association chief executive Neil Shand who said a good commercial trade was supported by breeders looking to buy a bull to breed replacements.

“They used to say a pen of finished cattle went towards your bull,” said Mr Shand. “Well if cattle are £200 less on the year, a pen of five has taken a grand off the bull budget.”

This is the first Corskie Highlander son to be offered and is out of the Curaheen Bandit daughter Islavale Farrah. MR and MT Quarm produced the winning bid. 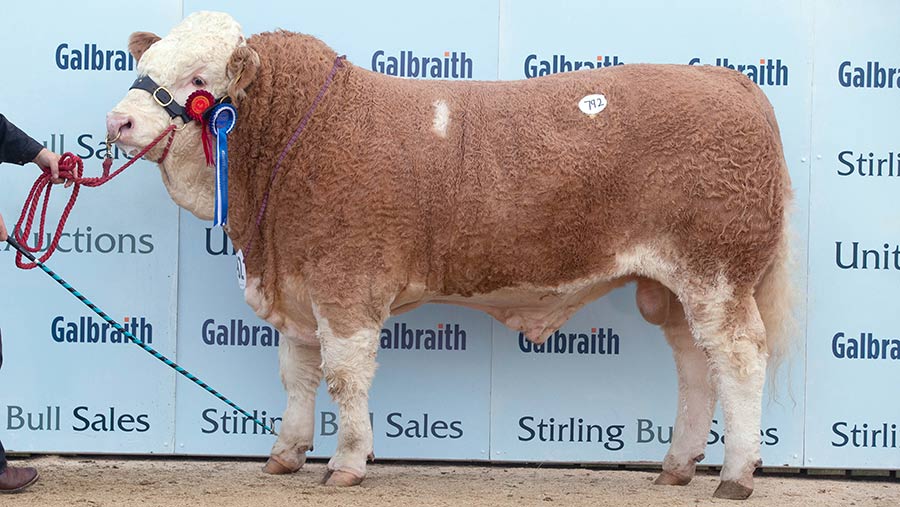 Next came three at 14000gns, with Team Jackpot from RJ MacGregor, Craigend, Perth, the first to this money selling to Barker and Borlase, Sacombe Hill, Hertfordshire.

This Team sire is by the 11,000gns Team Celtic and out of the Tilbrook Noble daughter Team Misty, a five time junior champion at the Royal Highland Show. 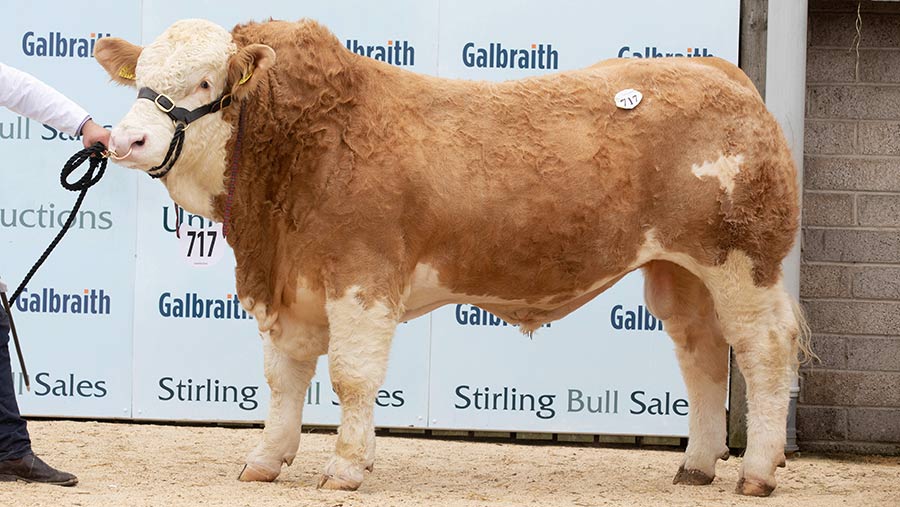 Another 14,000gns bid saw the Islavale herd in the money, this time with Jericho. He is a Ranfurly Confederate son out of the Glenturk Premier daughter Islavale Wincey.

He sold to the Gummows, Newquay, Cornwall. 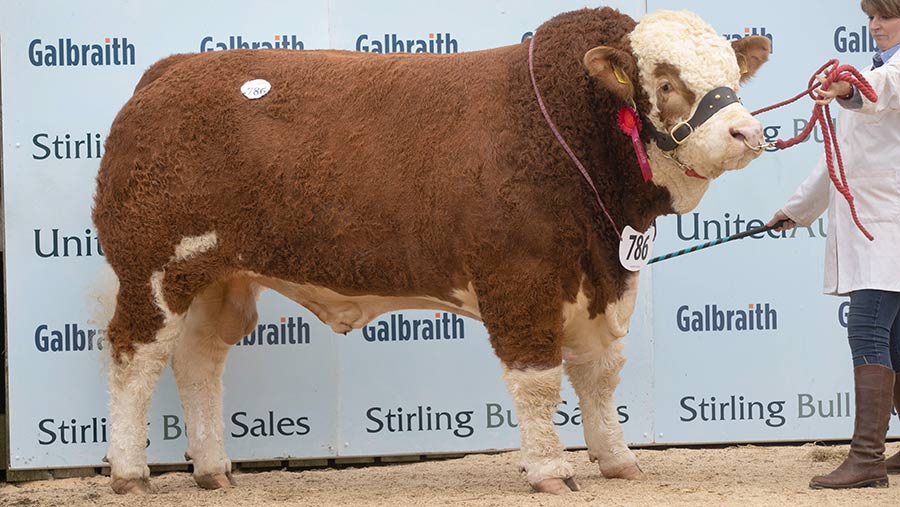 Matching this was another Team Celtic son, this time from WD Hazelton’s Ranfurly consignment from Dungannon, Northern Ireland. 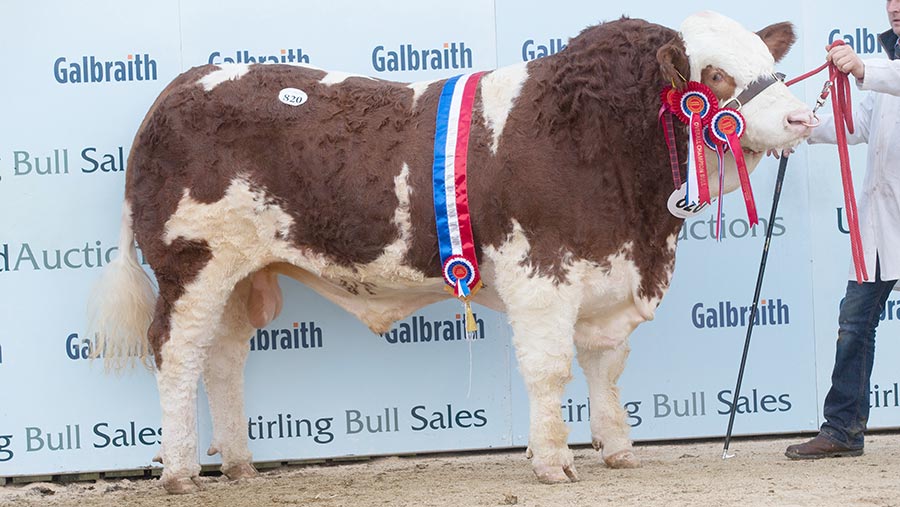 Next at 12,000gns was a bid for another Islavale sire, this time Islavale Jacob, which went home with Logan and Co, Dalflask Farm, Girvan.

He is another one out of a Curaheen bandit daughter and is by the Cleenagh Flasher son Ranfurly Confederate. 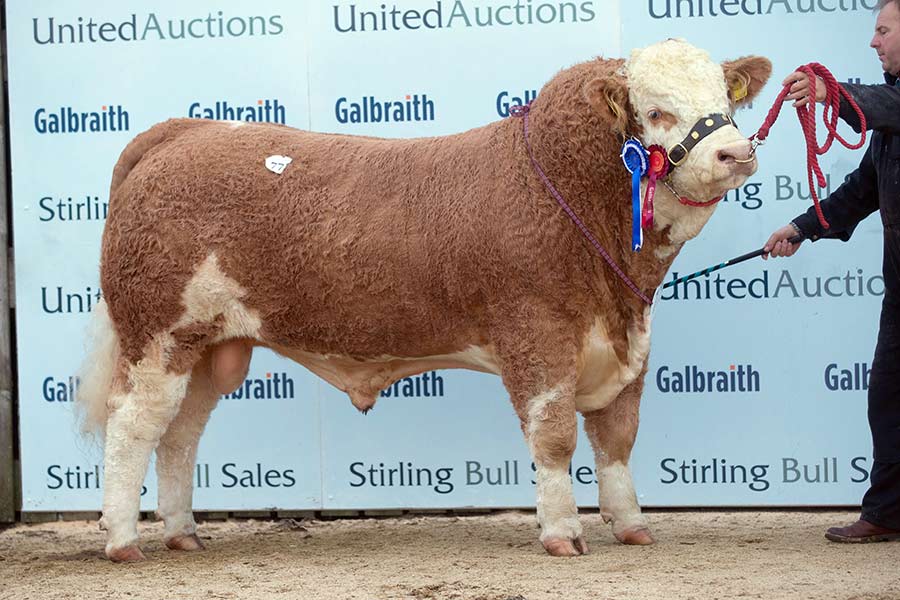 Next at 10,500gns was the Saltire herd of J and G Houliston, Drem, North Berwick, with a March 2018-born Woodhall Ferrari son.

He is out of the Popes Barclay daughter Saltire Felicity and caught the eye of Stewart Farms, Lennoxtown, Glasgow.

Next at 10,000gns was a bid from Pitgaveny Farms, Elgin, Morayshire, for Auchorachan Juggernaut from D and R Durno and Sons, Glenlivet, Ballindalloch. His grandmother Cheyenne and sire Gunshot sold for €18,500 and €15,500 respectively at the Curaheen dispersal.