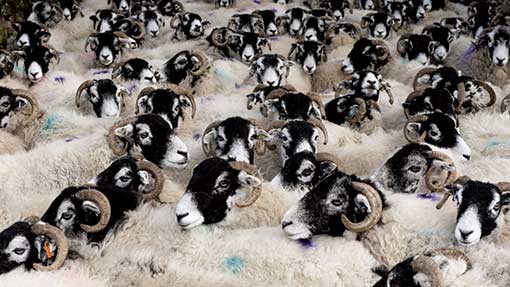 The Swaledale breed, which is gaining popularity away from its heartland in northern England, saw its first breed association sale in Tavistock recently.

No other pure breed of hill sheep has played a bigger role in the production of prime lamb in the UK than the Swaledale, with its genetics influencing many flocks.

Without this iconic north country ewe, the hundreds of thousands of North of England Mules that form the bedrock of the UK sheep sector simply wouldn’t exist.

So what is it about the Swaledale has seen it gain this vital role and to have successfully weathered a barrage of competition over the years from other breeds and crosses?

The production of North of England Mules from northern hill farms has played an important part in securing the viability of these businesses – and continues to do so.

‘The Swaledale is an excellent mother’

Producers in the South West are quickly recognising the qualities of the Swaledale. This autumn saw the inaugural show and sale of Swaledale rams held at Tavistock in Devon under the auspices of the breed association.

Neil Cole has about 1,400 Swaledale ewes on land rising over 420m at Princetown, Dartmoor on the farm that was previously part of HM Prison. They are run in conjunction with his other farm at Yelverton giving a total flock of about 2,000 ewes.

“When we took on land running to over 300m we found Swaledales were unbeatable,” says Mr Cole whose father bought his first Swaledale ram almost 30 years ago. His two flocks comprise one purebred flock and run on the open moor of Dartmoor, while the other is a flock of draft ewes from the moor flock which are run on in-bye land and put to the Bluefaced Leicester.

“The Swaledale is an excellent mother and she’ll achieve 150% lambing with no problem. We’ve a good demand for Mule gimmer lambs through the South West Mule Group’s sales and we sell Mule shearlings at Exeter in July.”

But Swaledale devotees in the West Country certainly know what they like. “We want our tups to have plenty of body, bone and substance – it’s the type of Swaledale tup that you find at the St John’s Chapel sale that we prefer.

“The Swaledale is becoming very popular in the South West and the value of the Mule gimmer lamb is driving that. We averaged £94 at the South West Mule Group’s September sale,” added Mr Cole.

The impact of the breed’s remarkable alliance with the Bluefaced Leicester has been responsible for the enduring popularity of the Swaledale and has given hill farmers the opportunity to produce a premium-earning product from their flocks year on year.

This autumn has seen prices for North of England Mule gimmer lambs more or less on a par with 2013’s. And as long as commercial prime lamb producers keep heading north to buy their flock replacements, the hill farmers that breed them will continue to run Swaledale ewes.

But as the commercial ewe-buying season draws to a close, hill farmers now turn their attention to next year as they prepare to spend a large chunk of their gimmer lamb earnings by reinvesting in Swaledale tups.

These are among the most critical weeks of the year, as flockmasters make vital breeding decisions during their meticulous selection of new stock rams. This season there will be 2,200 on offer at the Swaledale Sheep Breeders Association’s sales.

Alan Alderson is chairman of the breed association and farms near Kirkby Stephen. He oversees the 1,100 members which register 70,000 purebred gimmer lambs every year.

While the majority of the UK’s half a million Swaledale ewes graze the moors and fells of northern England, over the past 10 years more Swaledale sheep than ever before have spread to other upland areas of the UK.

“There are growing numbers of Swaledales in Scotland and also in the South West, particularly in Devon. And there’s recently been a sale of draft Swaledale ewes into Wales,” says Mr Alderson.

With plenty of hill flocks now achieving 150-160% lambing, the productivity of the Swaledale has never been better.

Lancashire hill farming brothers Edward and John Parkinson run about 1,000 Swaledale ewes on 810ha of heather moor near Dunsop Bridge in Lancashire’s Trough of Bowland. About 300 are crossed to produce Mules.

The Parkinsons support a scheme set up between the breed association and Marks & Spencer to market pure-bred Swaledale lamb.

“We take the Swaledale wether lambs off the fell in late September, then send them on to winter grazing until December and January when we house them for finishing.

“They’re inside on straw yards for up to six weeks and we’re aiming for a weight of 30kg-plus. The scheme proves just how versatile the breed is,” says John Parkinson.

Moving into its fourth year, the scheme puts about 600 lambs and hoggets on to the shelves of 90 Marks & Spencer stores each week

“The breed is renowned for its hardiness. I’ve just sold some older ewes and some of them were 10-shear sheep,” added Mr Alderson who acknowledges there have been changes in the breed over the years.

“As well as being a more prolific sheep the Swaledale is now a longer, taller sheep than it used to be and it’s carrying a shorter fleece.”

Of course, any breed of sheep with such a devout following that spans generations of hill farming families is bound to develop very specific traits as the benchmark of perfection – and the Swaledale is no exception.

Some traits such as the distinctive colour marking on the face and head may be considered purely aesthetic by onlookers, but selection for the famed “hard hair” on the face of superior Swaledale rams does have a practical implication, as Mr Alderson explains.

“The wiry, hard hair on the face is a desired characteristic of Swaledale rams and indicates that the sheep has the type of fleece breeders want.

“It is now a preference to breed Swaledale sheep with this hard hair on the face, but shorter fleece of the breed doesn’t detract from its hardiness providing breeders continue to breed sheep with a good, thick bed of wool.”

Face and leg colour is also part of the holy grail among breeders. “More white has appeared on the face of Swaledales and less dark colour on the legs. It’s linked to what’s wanted in the North of England Mule,” says Mr Alderson.

But while tradition dies hard among hill sheep breeders, some have reaped rewards from a break with convention. Among them are the Lawson family from Richmond, North Yorkshire, who cross their Swaledale ewes with Beltex tups.

The resulting cross-bred female has been an undoubted success and has inherited all the hardiness of its dam along with an infusion of conformation from the Beltex.