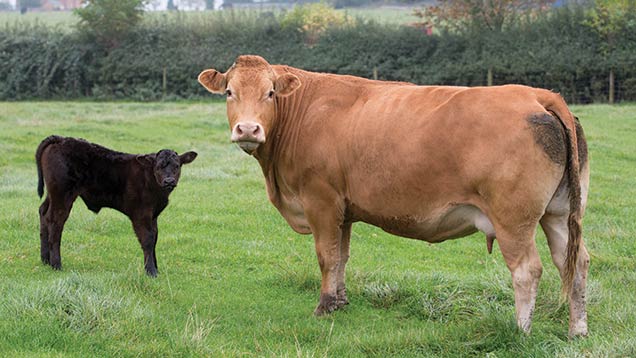 Suckler cows with a condition score less than 2.5 pre-calving should not be given extra feed in late pregnancy in an effort to improve body condition.

That’s the advice of beef adviser David Hendy, who says producers must focus on rectifying poor body condition post-calving and not pre-calving.

“I can’t stress enough how important it is to know precisely which cows in the herd haven’t wintered as well as they should have. Any in-calvers that aren’t in peak condition should be identified so that immediate action can be taken after calving.”

See also: Arguments for and against lifetime assurance in beef

Mr Hendy says in an ideal world these cows should be separated from the rest of the herd and treated as an individual group.

He adds: “If they are allowed to lose more body condition post-calving it will have serious financial implications in terms of the performance of both the cow and her calf.

“It’s no good pumping grub into thin cows a month before calving. All that will do is produce a big calf out of a thin cow,” says Mr Hendy.

His ideal strategy is to put cows on a rising plain of nutrition during the first four weeks post-calving.

“The average dry suckler cow only needs about 35MJ of energy a day, whereas a calved cow within four weeks of calving needs almost double that amount of energy in her daily feed intake.

“It’s often difficult to achieve this when cows in a herd are all calving at different times, but if they can be grouped into batches that’s one way of making sure the right cows are having their nutritional needs met.”

Most in-calf suckler cows will be fed about 15-20kg of silage a day and topped up with straw. After calving, cows need to be on ad-lib silage or haylage and up to 2-3kg of a concentrate or cereal mix to create a diet with a crude protein level of about 12% in total.

“By knowing the quality of the silage being fed, the aim should be to produce a diet that provides a suckler cow with 10-10.5MJ of energy for every kilo of dry matter intake a day – and remember her daily intake of dry matter will be 12.5-14kg.”

If producers allow suckler cow body condition to drop post-calving, it will have a severe impact, warns Mr Hendy. “If a cow is using body fat to produce milk early in her lactation she will lose body condition; ultimately her reproductive cycle will be affected.

“But the immediate issue concerns her calf. If there’s a shortfall in milk yield, it will have an adverse impact on the calf’s growth rate.”

This year he kept most of his herd outside until mid-December, before calving down in mid-February.

“We feed a TMR mix of grass silage, straw and potatoes to the cows when they come inside, but this time we grazed most of them on stubble turnips until mid-December.

“We’re trying to do all we can to reduce costs and the stubble turnips worked really well. They saved us several weeks of inside feeding and as a bonus the cows came inside in very good condition,” he says.

Cows were condition scored in the autumn to identify the fitter cows. “The cows in condition score 3-3.5 were left outside on the turnips and when we checked them again at housing they were in the same condition.”

Mr Corlett has been pleased with the way freshly calved cows have held their condition. They will remain on the TMR mix with no additional feed but are on target for an early turnout.

“Last year we started turning out cows and calves on 17 March. We might be a bit later this year but we rely on the early spring grass to give a boost to any cows that need to gain some condition after calving.”