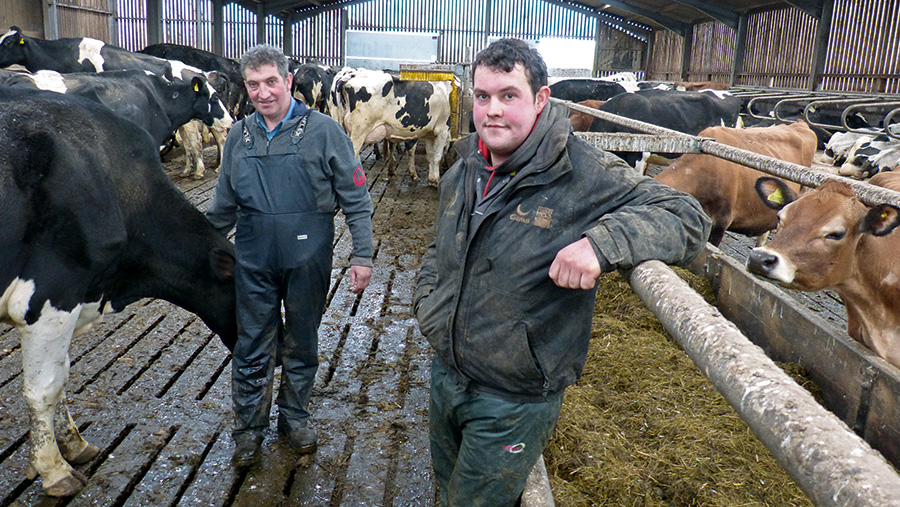 A Pembrokeshire farm has tailored transition-cow management for cows carrying twins, boosting milk yields by up to 1,000 litres a cow.

The Griffiths family made alterations at Penlan Farm, Haverfordwest, in 2014, after scanning revealed eight sets of twins were to be born in five weeks.

Unable to work out what caused the run of twins, Andrew Griffiths and son Rhys looked to alter twin-cow management in their high-profitable lifetime index herd to prevent energy-negative fresh cows and spare a production shortfall of 21 litres/day in early lactation.

Fertility was also an issue, admits Rhys, with cows needing up to three services following a twin birth.

The decision was then taken to scan the Carwyn herd monthly, combining the expertise of both the farm’s veterinarian and its AI company to alter twin cow management.

The result has been an extra 500-1,000 litres produced a cow, with cows now calving twins and “not looking back”.

Cows are scanned about 35-40 days after service, usually at about 90-100 days through the lactation.

Any twins are noted and some twin-carrying cows are dried off a little earlier, although Andrew stresses this depends on individual cows.

“Scanning has an advantage over manual palpation as we can detect twins,” explains farm vet Marcus van Doorn of Allen and Partners veterinary practice, Whitland, who stresses that scanning will not identify 100% of twins, but will detect the vast majority.

“Some cows carrying twins want drying off earlier,” adds Rhys, with the decision taken by the time yield drops to 7kg. “If they dry off early it’s no earlier than 280 days.”

Cows are dried off and placed in cubicles in the dry-cow house for the two-month dry period, with single-carrying cows turned on to grass in summer.

Twin-carrying cows remain inside all year, however, and are introduced to the milking herd 30 days earlier than single-bearing cows to adjust to the ration, although Andrew stresses that sometimes this can mean only one or two weeks, with many twin-carrying cows calving early.

“This is so there is not too much change,” says Andrew. “As fresh cows they aren’t dealing with a change in ration or new herd dynamics and dominant cows; they only have to worry about milk production.”

“This is to prevent milk fever by maintaining calcium levels and the anionic/cationic balance. Our vet recommended this 12 months ago after two older cows had milk fever,” says Rhys.

“Cows carrying twins typically calve two to three weeks earlier, so you can make that adjustment and then you can alter management in the dry-cow period as well.”

A post-calving rehydration drink is now standard policy for cows feeding the twins, which get a 1kg jug mixed into 15 litres of warm water.

Twin-carrying cows are given a ketosis bolus three weeks before calving, along with cows that are “overfat” (>3.5 BCS) and thin.

Andrew says the ketosis bolus, while expensive at £27 a head, pays for itself and the bolus gun makes administration easy.

“Since we changed our twin-cow routine, the cows have not looked back,” says Andrew.

“As well as the production gains we have seen improved fertility, with every cow given a bolus holding service first time – whereas before it was second or third service.

“They calve in giving 30 litres and there is no jump in production.

“On occasions when a cow throws a bolus out it is often found at the front of the cubicles and there is a code number on each one which you can note down in order to track which cow has thrown up the bolus.”

Supplying the bolus helps clinical ketosis and has a secondary effect on milk fevers and left displaced abomasum (LDAs), which are linked to low energy from insufficient feed intake, says Mr van Doorn.

“It assists them in the period of negative energy balance, which all fresh cows have to an extent,” he adds.

“However, we don’t want cow appetite to lead to clinical stages of ketosis, milk fever or LDAs.”

“This is what the cow needs a lot of when she starts her lactation.

“As a result, her negative energy balance won’t be as severe, which prevents clinical ketosis that would cause her appetite to drop.”

Major building reconfiguration in 2013 now enables dry cows to be fed a consistent TMR with the milking herd for a month.

Cows are bedded on sawdust and mattresses on 2.43×1.21m cubicles (8x4ft). A 4.8m passage allows ample room for cows to access a central feed bunker on top of a slatted floor.

“Cubicle area is calculated to allow the biggest cows a foot of forward-lunging space,” explains Rhys.

“The slatted floors have helped control manure, which we believe to be important as there is a lot of digital dermatitis in our area.”

He says the instinctive nature for cows to eat together and rest together means room is at a
premium.