Last Friday’s (9 December) final Limousin sale of 2016 ended on a record-breaking high at Borderway Mart, Carlisle, in what has been another strong year of bull and female sales for the breed .

See also Limousins sell at up to 5,100gns at Welshpool

Leading the way at 32,000gns was the supreme champion from the pre-sale show in the shape of the maiden heifer Grahams Lilly from R and J Graham, Airthrey Kerse, Dairy Farm, Stirling. 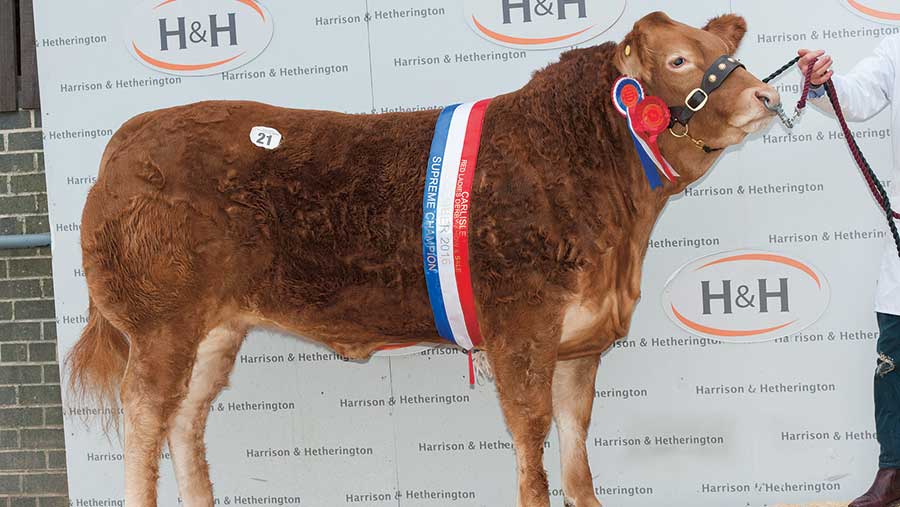 An embryo calf born in May 2015, Lilly is a full sister to the 40,000gns Grahams Lorenzo and the 16,500gns Grahams Lizzie. Grahams Lilly is sired by Claragh Franco and is out of Grahams Coffee, who is a Millington Vascular daughter.

She was snapped up by W Richardson and Son, Ghyll House, Appleby, Cumbria, for the family’s burgeoning Mystyle herd.

It was a terrific day for the 50-cow Grahams herd who sold seven animals in all for a mighty £75,600.

This October 2015-born heifer is the first calf from the homebred sire Dinmore Immense who was male champion at the Royal Welsh Show in 2015.

Her dam Dinmore Eclipse, by Haltcliffe Vermount, is a maternal sister to the well-known sire Wilodge Cerberus. Purchasing this animal was Steven Wilson, Egremont, Cumbria.

Grahams Lobelia made 10,000gns when selling to new buyer Iain Graham, Rose Castle Farm, Dalton, Carlisle. Again sired by Claragh Franco, this May 2016-born embryo calf is out of the imported dam Cavaliere, who is sired by Rammadan.

Taking the Reserve Overall Championship in the pre-sale show was Beachmount Lady from K and C Knox, Whitehill North, Co Fermanagh, Northern Ireland, who sold for 9,100gns to Aileen Ritchie, Whitecairns, Aberdeenshire for her Ritchies herd.

Sired by the 32,000gns Millgate Fame this heifer is out of Glenrock Impulse who is a full sister to the world-record breaking 125,000gns Glenrock Illusion. Purchasing Harestone Ladylike was Paul Cairns for his Plumtree herd at Hall Farm, Tollerton, Notts.

Setting a new-weaned calf sale record for the breed at 10,500gns was the first bull calf in the ring Pabo MrMuscle from WP Hughes and Son, Llanbabo, Rhosgoch, Anglesey.

The calf sold to Gary Bell, Hass Side Farm, Lockerbie for his Haassidefarm herd. He is sired by the popular AI sire Lodge Hamlet and out of the Jockey sired dam Derosa Visa. 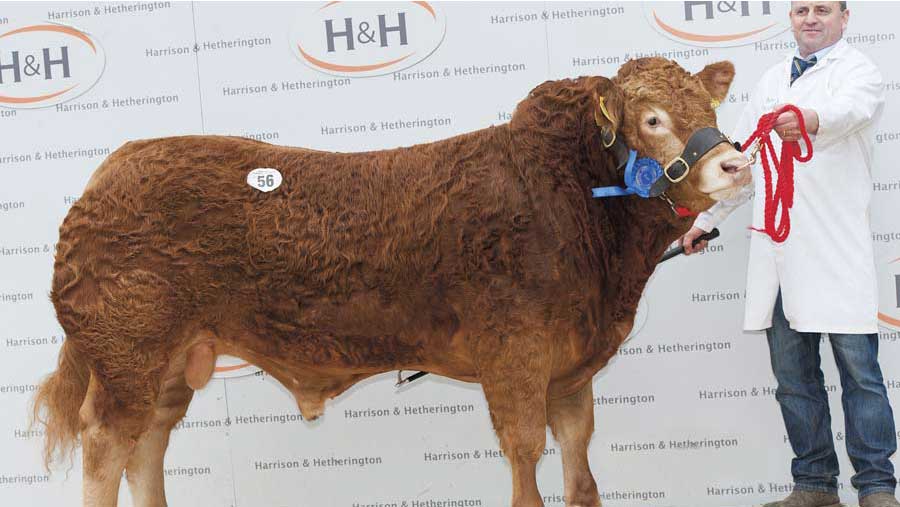 Iain Graham, Rose Castle Farm, Dalton, Carlisle, who had purchased in the Red Ladies sale, was back in action to buy Burnbank Maggiemay from D and L Graham, Mains of Burnbank, Blairdrummond, Stirling for 9,000gns.

A January 2016-born heifer, Maggiemay is sired by Elite Foreverbrill and is out of the dam Burnbank Crystal, sired by Grahams Tycoon.

Another sired by the AI sire Claragh Franco, this March 2016-born bull calf is out of another imported French dam Cousine, who is sired by Toutastis.

The same-way bred both heifers are by Haltcliffe Gentry and out of the Objat daughter Glenrock Diamante.