The new record-setter was Cap, a black and white dog bred by Padraig Doherty, Republic of Ireland, who with his brother Joe, runs Ardagh Sheepdogs in County Donegal.

The selling price shattered the previous world high of 8,800gns (£9,240) set at Skipton in May, 2013, for a 15-month-old black and white dog from North Yorkshire’s John Bell, of Parks Farm, Howden, near Selby.

Cap went to Northern Ireland with an anonymous purchaser. 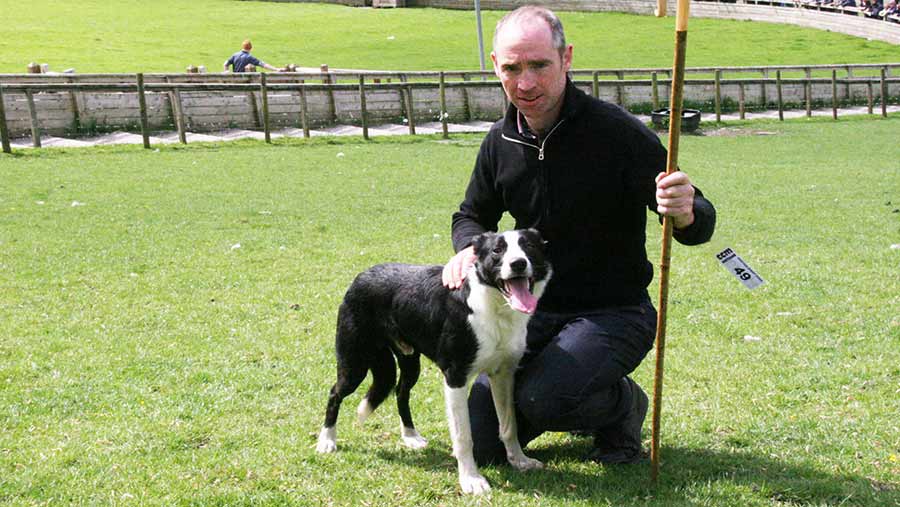 Cap’s mother is the Doherty family’s Sue, whose own sire, Dan – the 2013 Irish National champion and also winner of “One Man and His Dog” in 2014 – is a half brother to Mr McGee’s 2011 World Sheep Dog Trials supreme champion, Becca.

It was the second record set by the Doherty family, who sold a litter of six-month-old pups last year, one of which sold for 1,850gns – the highest-ever price paid for a pup sold at Skipton.

On the day a record average for registered broken field dogs of £2,572 was achieved.

Next best at 6,000gns was an entry from another regular top price achiever at Skipton, North Craven’s Shaun Richards, of Pen-y-Borough Sheep Dogs in Eldroth.

His December, 2013-born tri-coloured bitch, Nora, bought out of Ireland late last year, was also bred by Eammon McAuley’s Roy, out of J McNaughton’s Jill. The purchasers were father and daughter fell farmers, Ivan and Hannah Dickinson, of Brocktown Farm, near Kendal.

Earlier in the day, they paid 3,900gns for Shaun Richards’ home-bred and fully broken two-year-old black and white dog, Pen-Y-Borough Blue, out of his own Meg and by Katie Cropper’s multiple Open trials winner Zac.

John Bell’s best-seller at 4,200gns was his 15-month-old black and white dog, Ben, bought out of Skipton’s pup pen as a nine-month-old last October. He was bred by Mrs J Cook, of Egton, Whitby, being by her Shep, out of Jen.

Ben found a new home with David Houghton, and will be put to work on his Tophill pedigree flock at Affetside, near Bury.

Weardale’s John Bell, made 3,100gns with his ten-month-old black and white Mick, a grandson of Bobby Dalziel’s Spot, by D Henderson’s Burndale Chief, out of J Emerson’s Meg. It sold to a buyer from Wales.

Welsh breeder and trialist Huw Francis, Welshpool, Powys, was also among the leading prices when selling his two-year-old tri-coloured dog, Bill, by Pat Byrne’s Lad, for 4,000gns to a buyer from Cumbria.