The son of the imported sire Fenomen was consigned by Jim Bloom and family from Driffield, East Yorkshire, and out of Scorboro Caramel.

Magna, with an EBV beef value of +55, was knocked down to DA Bailey and Son, Ahsbourne, Derbyshire, who will run him as a stock bull. 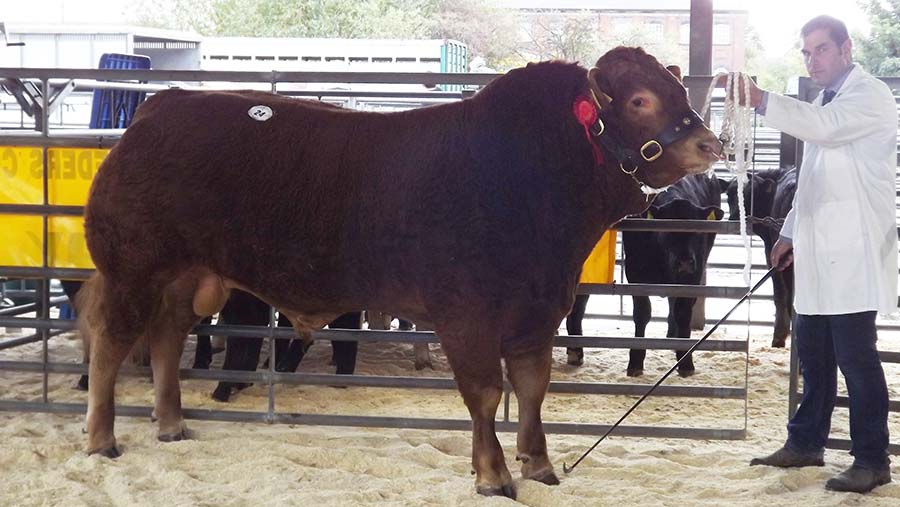 Following him was the pre-sale champion, Calogale Lord, which sold for 5,000gns.

Out of Baileys Countess and sired by Dinmore Goldeneye, the two-year-old was sold by Messrs Lee and Lloyd from Carmarthenshire and went home with SH Hamplett from Haughton, Staffordshire.

Next in the money at 4,900gns was Cockleshell Luckystar, by Mereside Hannibal and out of Cockleshell Hunice, bred by the Pitcher Family, Boston, Lincolnshire.

With an EBV beef value of +53, he attracted the attention of RG and JRH Holmes, Ratcliffe on Soar.

Maiden heifer Blackfriar Melia, crowned the pre-sale female champion, topped female trade on the day. Trading at 3,500gns, she caught the eye of buyers A Smith and Son, Selston, Nottinghamshire.

The Gerrygullinane Glen daughter is out of the Cloughhead Umpire daughter Blackfriar Emelia and was entered by Mike and Will Morton.

Knocking down at 2,350gns was Bosworth Frollic from Simon Tysoe, which sold with two calves at foot. The Wilodge Vontrapp daughter is out of Bosworth Valentine and was sold with an unregistered bull calf by Emslies Gallieo and a heifer calf to Gary Sharp, Fristling Hall Farms, Stock, Essex.

Another cow-and-calf outfit was then sold at 2,000gns – Ian Brown’s Lowgate Jessie by Sporsmans Ferguson and out of Lowgate Esmeralda. She was sold to G and S Gilleard, Thorne, Doncaster with heifer calf Lowgate Nancy, by Bolide, at foot.