A 8,500gns centre mart record was set by the Gunnerfleet herd at Skipton on Wednesday (9 May) at the spring show and sale of pedigree Limousins.

Plumtree Fantastic sons have sold to 35,000gns and one of his daughters produced a 30,000gns bull this February back home in the Handley’s 50-cow herd. 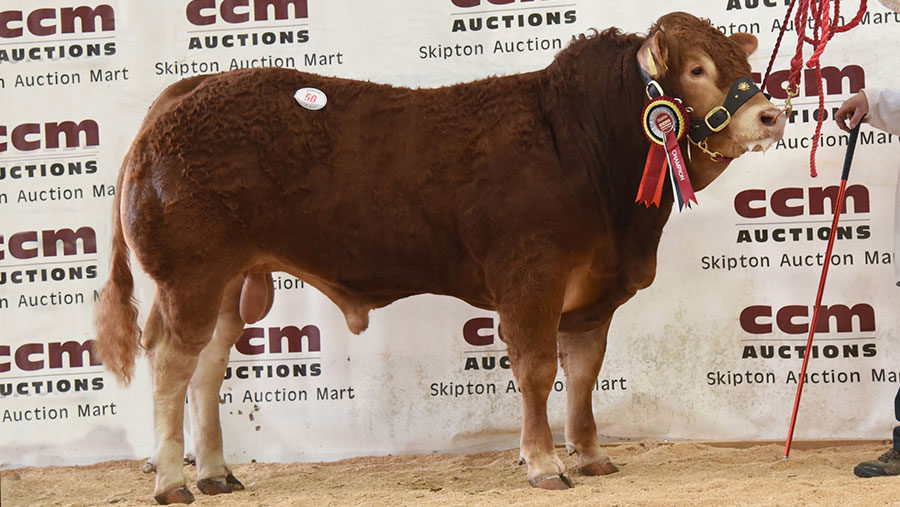 Also of note at 5,500gns was Gunnerfleet Murc, which was knocked down to Peter Cowton, Helperby, Hambleton.

He is by Maraiscote Graffiti, who was bought for 17,000gns as a show champion and managed a 10,000gns with his first four sons for the Handleys.

Two bulls then made 5,000gns, the first being a senior bull from Proctors Farm, Slaidburn. Proctors Mutineer is an embryo calf by Rossignol-sired Haltcliffe Doctor.

Bred from the Sarkley Volt daughter Bankdale Erin, Mutineer was taken by John Clayton, of Wyke, Bradford, for a relatively new breeder, John’s Bentley Brook herd, also based in Wyke at Bentley Farm.

Also at 5,000gns was Whittaker Hall Mario from Lancashire breeder Robert Howard, Guide, Blackburn. He is a Wilodge Flyer son out of a Ballinloan Rascal cow. He was knocked down to the Spence family, Whitewell, Clitheroe.

Senior bulls that were ready for work and looking strong sold well and ranged between 2,300gns to 5,000gns, with only one failing to find a new home.