Beltex females from the College flock of EJ and AM Fox, Biggar, Lanarkshire, were in demand when they had a major reduction of their flock at the annual society sale of in-lamb ewes at Carlisle.

Prices for rose to 8,500gns for the day’s champion, College Adele, a shearling gimmer by Kingledores Trojan and out of College Rose.

She sold to KR Buckle, Barras, Kirkby Stephen, having been scanned in lamb with a single to Clarys Ace, a ram with hard muscle and plenty of power. 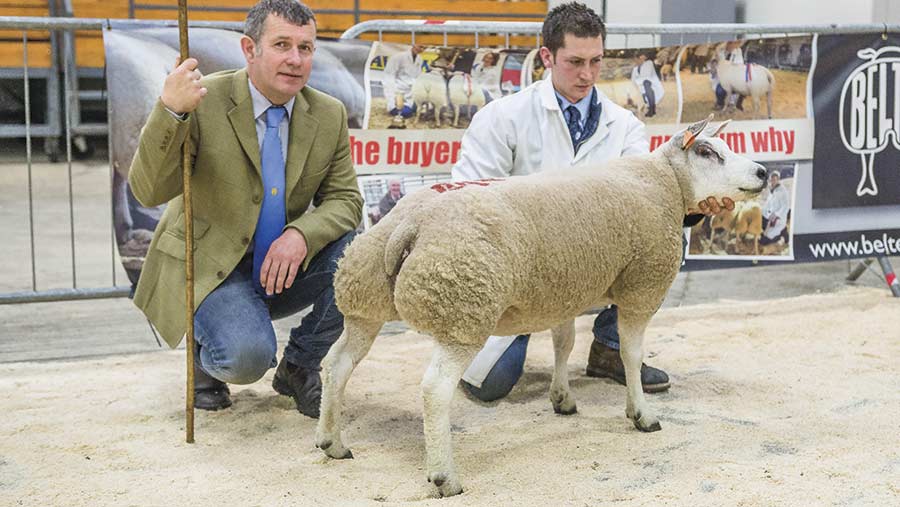 Overall Beltex champion College Adele from the College flock of EJ and AM Fox, Biggar, sold for 8,500gns © Robert Smith

Selling at 4,000gns was a ewe from the same home. Also in lamb with twins to Clarys Ace, she is by Artnagullion Rockafella and out of College Rose. Buyer was G Wilkinson, Arkleby, Wigton.

Texel ewes sold to 6,800gns at the same venue at the Solway and Tyne Texel Breeders club sale.

Selling at this money was the day’s champion ewe from Boden and Davies Sportsmans flock, sired by Knap Vicious Sid and out of a dam by Tullylagan Tonka. She sold to Vaughan Farms, Oakfield Farm, Leominster, Herefordshire.