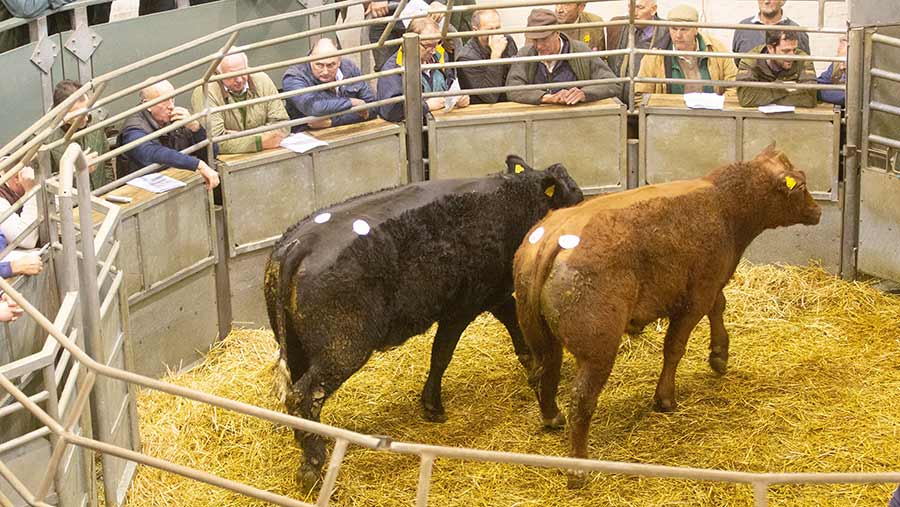 Early suckled calf and store cattle sales is feeling the pinch this autumn as finished cattle trades at £150-£200 less than a year ago.

Many centres have seen calf trade back £20-£50 a head or more on the year, despite cattle being heavier. However, not all sales have seen averages fall.

Some have seen bigger, better-fleshed cattle sell for less money on a p/kg basis, but gross a higher figure overall because they are carrying more weight after a summer of plentiful grazing.

Trade is suffering in the West Midlands, where auctioneer Mark Burgoyne of Nock Deighton Agricultural is seeing 90% of cattle – both store and finished – lose money.

Autumn suckled calf sales were yet to get into full swing, but Mr Burgoyne said older, “middle-of-the-road” stores that would need turning out next spring were back £100-£200 a head on a good day.

“I think the industry is on a precipice and getting to a point of no return,” said Mr Burgoyne. “A lot of suckler cows could end up being sold unless it picks up soon.”

He said he was managing expectations and advising farmers to expect weaned calves to sell for £100 less than last year.

“I think the U-grade, Limousin types out of Blue cows might only be £40-£50 a head back,” said Mr Burgoyne. “Sometimes the finishers realise they need the best ones and they don’t actually drop, they go slightly dearer.”

Thainstone sold 1,599 weaned and store cattle last week (11 October), with p/kg prices down on the year.

He said suckler farms would be questioning the profitability and viability of their herds.

“Trade is not in a good place,” said Mr McDonald. “However, we have ample straw and silage, so they will be cheaper to winter.”