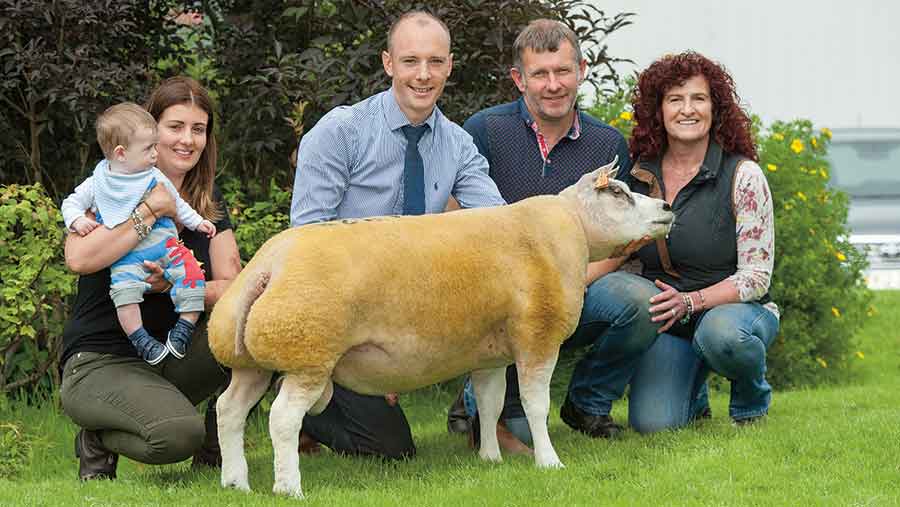 Averages and numbers were generally up on the year for most categories, with commercial and pedigree interest supporting consistent trade throughout. Shearlings levelled at £1,225, almost £300 higher with 11 more sold.

The record breaker, from Grant and Gemma Anderson, Carrutherstown, Dumfriesshire, is a twin-born son of Woodies Wots Up Doc and out of Drumchapel Racy, an ET-bred Kingledores Mighty Mac daughter, knocked down to Paul Tippetts and Christine Willliams, Park Lane, Shifnal.

The trade topper caught the buyer’s eye at the Royal Highland Show and almost doubles the previous 2003 record of 34,000gns for Tullygarley Elite from J K Currie and Sons, Ballymena, County Antrim. 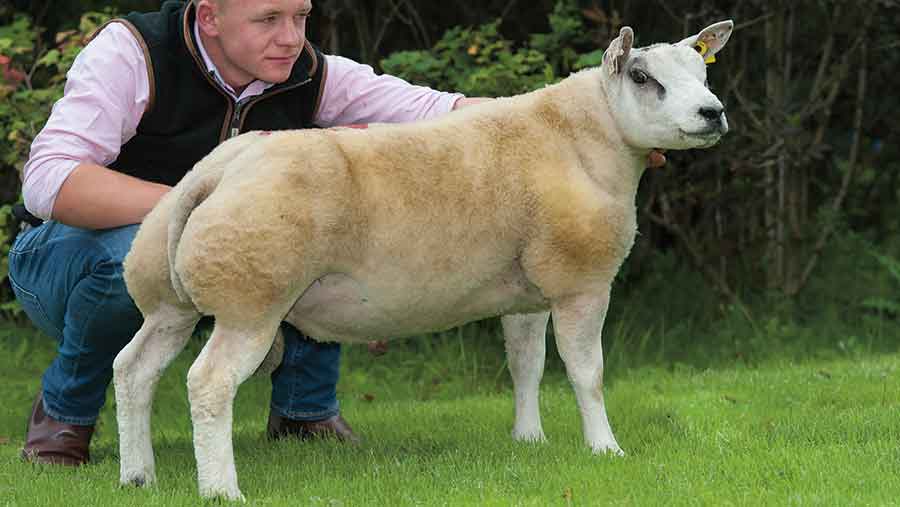 Within 24 hours another record was set at 25,000gns for ram lambs by Broxty Boxer from the Buckler Family, Kirkby Stephen, catching the eye of Andrew Wood for use in his Withy Trees flock. Home-bred on both sides, he is by Broxty Supreme and out of Broxty Wispa, an Ardstewart Super Mario daughter, and very nearly doubles the 12,500gns record set in August 2012 for Woodies Snoop Dog from Stuart Wood.

After the record breaker was Cree Action Man at 13,000gns from the Campbell family, Creetown, Newton Stewart. He is by Clary Prankster and out of Cree Sandy and also went home with Andrew Wood.

A brace then came at 12,000gns, first being Glantre Avici, a Glantre Tywydog son from Michael Owens, Pontsian, Llandysul. He is out of Woodies Scooby Doo daughter Glantre Totty and knocked down to Henry Jewitt, Barnard Castle.

Matching this was the Irish Ardstewart Angus from Wade and Alison McCrabbe, Raphoe, County Donegal. He went home with commercial ram producer Paul Slater, Macclesfield, and is out of Ardstewart Talk of the Tavern and by Rathbone Tony.

Next at 11,000gns was Procters Aerosmith from Procters Farm, Wray, Lancaster. This Rathbone Wallace son is out of Artnagullion Samanthaand was shared by I Reid, Methven, Perth and Messrs Wood and Hunter, Muthiil, Crief.

Leading gimmer prices at 5,000gns was a Diablo V/D Laatse Stuiver daughter from Stuart Wood, Skene, Aberdeenshire. Woodies Art is out of Woodies twilight and sold in a two-way-split to S and S Moore, Brechin, and Neil Caul, Kirton of Auchterhouse and led a strong gimmer sale with prices £135 up on the year for 14 more sold.

See also: Breeding sheep dearer on the year at Thame

Second best at 3,800gns was Kingledores Amelia from Richard Wood, Tweedsmuir, Biggar, which saw Mr Jewitt with another winning call. This Kingeldores Wurzle daughter is out of Kingledores Philippa.

Overall trade bottomed around £500 to £600 for sires, with a “strong trade right through” for auctioneer Mark Richardson, who knocked down the Anderson’s record breaker.

“Both lamb and cast ewe trade has been stronger this time which has helped,” he told Farmers Weekly, adding that commercial bidding regularly saw terminal sires break well into four figures.

“People were after square and shapely tups that bring a carcass premium – even when trade is bad these high quality lambs sell better. The record breaker would have been about as close to the original Beltex type when the breed was started as you can get.”