Two of the year’s highest prices for UK dairy cattle were reached at the dispersal of the Wyndford herd at Chadwell Grange, Shropshire, on Thursday (10 August).

Highs of 18,000gns and 13,000gns were called to a busy ringside of 96 buyers from across the UK and Ireland, with the day’s top call going to Cees De Jong, Hoogblokland, the Netherlands, for his Jongsteins herd.

The leading lady was Wyndford Sanchez Erle 10 (EX93) who is by Gen-mark Stmatic Sanchez and out of Wyndford Damion Erle 3. Her sire is by Maughlin Storm son Comestar Stormatic.

Her grand dam had three EX daughters in the catalogue and is part of the Erle family, which can be traced back to Field of Dreams Formation Erle. She is full sister to the 12,000kg Wyndford Damion Erle 2. 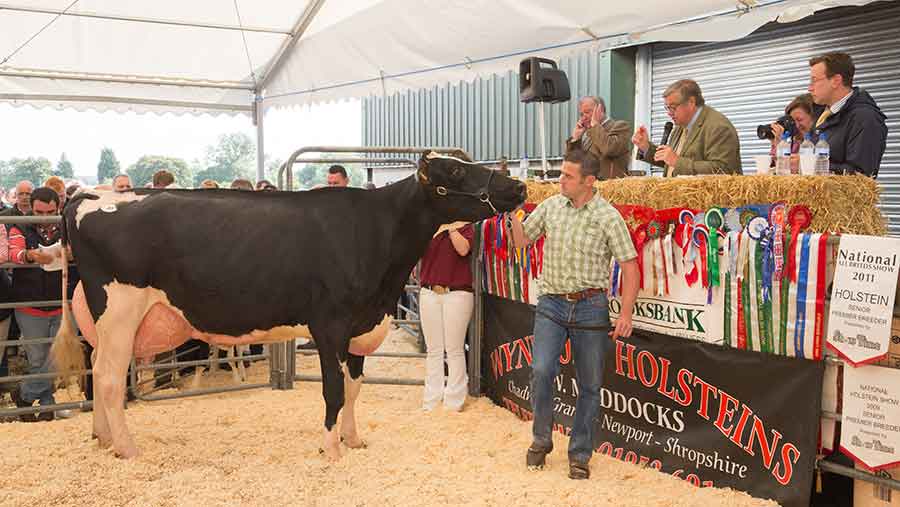 She is by Maple-Downs IGW Atwood and out of Wyndford Stanley Mrs Melody, a descendant of the 32,000gns Huddlesford Mrs Melody EX93 bought in 2011 at the Huddlesford dispersal.

Two then made 6,000gns, with the first call to RJ Watt for Wyndford Windbrook Ambrosia (PLI+£139). She is by Gillette Windbrook and out of Regancrest Elton Durham daughter Ridgefield Durham Ambrosia. 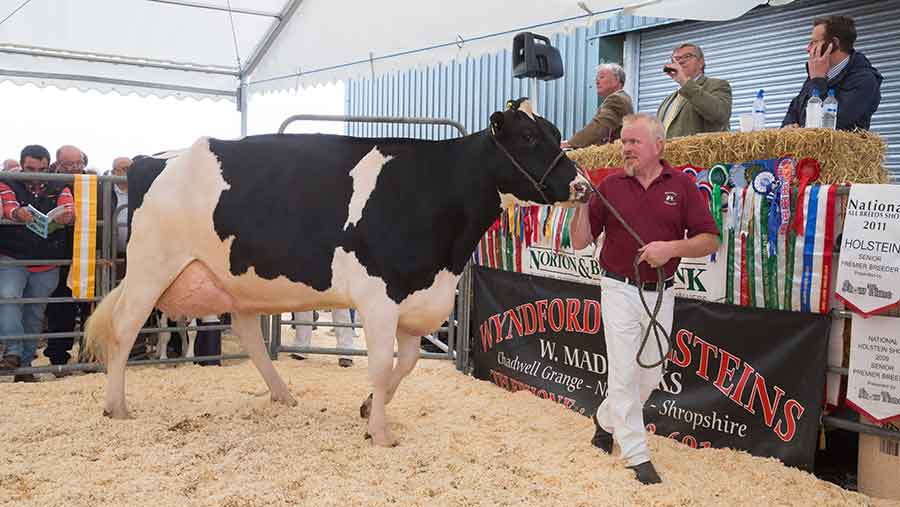 Wyndford Windbrook Ambrosia went to RJ Watt and was one of two lots to hit 6,000gns © Tim Scrivener

Matching this was Wyndford BD Atwood Appletime, this time snapped up by D O’Neill from the Denholme herd.

Elsewhere in the trade were calves at foot peaking at 3,800gns for a nine-month-old Fontaine daughter of Stanley Mrs Melody and 14 heifers made 2,000gns or more, topping at 5,000gns for Wyndford Lotus Rebecca 97.

Auctioneer Tom Brooksbank said it was a delight to sell such a fine herd. He said 2017 had brought increasing confidence among cow buyers through stronger milk prices of around the 30p/litre mark and a good barren cow trade.

“There were a lot of people at the sale and a really good atmosphere,” he told Farmers Weekly. “We managed the top two prices for UK dairy cattle for the year so far.

“The Wyndford herd has used a lot of good modern sires and built on some very strong families. Torches sold well as did the Erle family and Doorman was also sought after.”