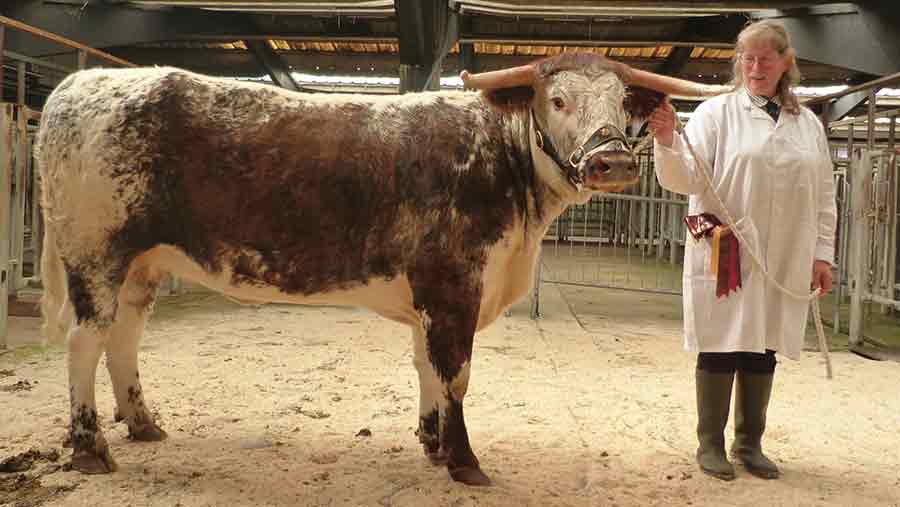 Sired by Raincliffe Harry, she is out of a home-bred dam and sold in-calf to Llantrothy Kestral. Buyer was Susan Aglionby, Houghton, Carlisle.

She sold to Annie Auchine, Huntly, Aberdeenshire, with her August-born steer calf at foot and having been served to Frondeg Lion.

Sired by Planetree Apollo he is out of Planetree Hermione. Buyer was JF Kemp, New Abbey, Dumfries.

They were the pick of Pear Tree Projects, Heighington, Darlington.

Just shy of this at £700 and leading Belted Galloway trade was the March 2014-born Askerton Miranda, sired by Park Hadrian and out of a Askerton Gaby, from JR Eden, Brampton, Cumbria.

She sold to W Mitchell and Sons, Newton Mearns, Glasgow, having been served to Askerton Belted Will.

Carrying embryos out of Blairmore Berne VBN0335 and sired by Tip Top Abercrombie, both are due in  December and have been scanned carrying twins.

They sold for £2,310 each to V Cartner, Blackwoodridge House, Waterbeck, Lockerbie.

In the Border Leicester sale, the top price of £550 was a bid for shearling ram Solway BL966 from R and S Ker, Justinlees Farm, Annan, Dumfriesshire.

It went to S and A Bland and Barker, Dalefoot, Askham, Penrith, Cumbria.

Out of a Kinloch ewe and sired by Blackbrook Fire Balls, it sold to M Leggate, Stramolloch Farm, Chapleton, Strathaven, Lanarkshire.