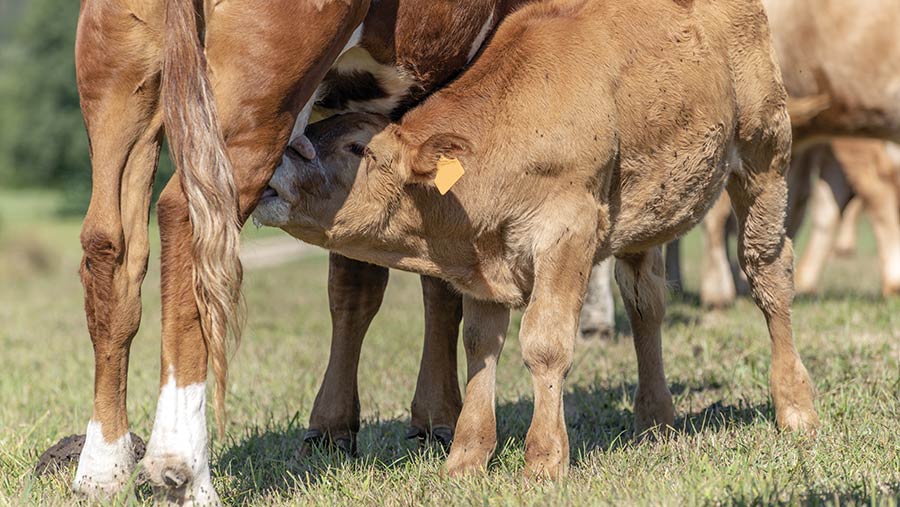 Sales of beef breeding cattle have been strong despite grass becoming increasingly scarce following one of the driest springs on record.

Premiums continue to be seen for commercial cattle sold at marts in low risk and officially bovine tuberculosis (bTB)-free areas such as Yorkshire, Cumbria and Scotland.

Grass Check GB indicates farms are becoming short of grazing, with growth recorded last week around 66% of the long-term average.

However, growth is slightly stronger on some Scottish farms which had more than 20mm of rain last week.

An entry of 103 bulling heifers and outfits was reported at Stirling last month (21 May).

Heifers with calves averaged £3,700 apiece and rose to £6,000 for strong “show potential” cattle.

“They were great quality and fantastic to sell,” said auctioneer Oliver Shearman. “Probably one of the easiest entries to sell that I’ve had.”

Mr Shearman added demand was strong, and people were still wanting to buy cows, despite the dry spring.

“Grazing isn’t an issue up here yet, there are still a few people looking for cows,” Mr Shearman said.

Dry weather has not affected trade at Bakewell either, where breeding cattle sales have moved from Mondays to a larger monthly sale on Thursdays to help with social distancing.

A mixed quality offering was entered at Bakewell’s May breeding sale (21 May), where trade was topped at £1,980 by a seven-year old British Blue cow and her autumn-born heifer calf.

Commercial outfits comprising three-to-four-year-old animals with calves up to one to two months old generally sold for around £1,300- £1,400.

An entry of 50 bulling heifers fetched a range of bids either side of £1,000 for animals two years old or more, with 13-14-month Stabilisers at £880 and a pedigree Welsh Black of the same age making £880.