The first British Blue Cattle Society sale of 2017 at Borderway Mart, Carlisle, saw prices rise to 11,000gns with 16 bulls selling for 5,000gns or more and a clearance rate of 90%.

British Blue Society secretary Andy Ryder said buyers were looking for quality Blue genetics, to breed carcasses to supply what the market demands. “There is also a big demand for Blue bulls for breeding replacement females,” he added. 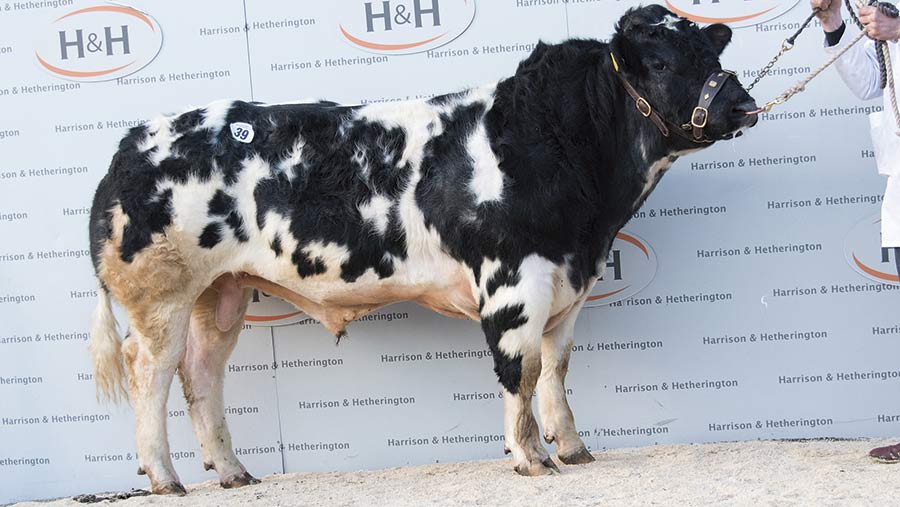 This dark blue son of Almeley Ginola, who was purchased for 20,000gns and out of the 12-year-old cow, Greystone Weetabix, sold to Richard Mowbray for his Droit herd based in Northern Ireland.

Also from the same stable, at 9,500gns, was Greystone King, also sired by Almeley Ginola, but this time, out of Greystone Emeralde. Buying this one was J Lee, Morley Hill Farm, Hexham.

Selling at the same money was one of the first entries into the ring, Pendle Jager Meister from the Hartley family.

Sired by Newton Blues Chico and out of Pendle Hocus Pocus, he was placed second in his class at the pre-sale show and found a new home in Grantown-on-Spey, with H MacDonald.

Taking the overall championship and next in the money at 8,500gns was the black bull Top Side Joey, from Ross and Elaine Pattinson. Joey boasts some top EBV figures and is classed as a Superior Carcass Sire.

He was male champion at the Great Yorkshire Show and was sired by Fleuron De Maffe and out of Rathlyon Dinah. He caught the eye of William McLaren, Kirriemuir, Angus.

Another Superior Carcass Sire, at 8,500gns was the reserve male champion, Stonebyres Krona from Blair and Shona Comrie, Lanark.

A son of Kelowna Ferdinand, the successful bidder was JL Hartley, Holdgate, Shropshire, who also purchased his father back in 2011.

Also selling at 7,500gns was John Stephenson’s Bordley Kilnsey King. This dark blue roan son of Tanat Harlequin and out of Hawksbridge Fantasia was purchased by JM Townsend from Laneshawbridge, Lancashire.

Two bulls sold for 7,000gns. The first was Droit Jimmy from the Droit Herd of Richard Mowbray. This almost black bull was a son of Auchenlay Coll and out of the Baron-sired cow, Droit Emma. He finds a new home with TM Hill, Riding Mill, Northumberland.

Next was the Bellas family from Appleby, Cumbria, with their black and white bull, Croftends Kingston. Out of Croftends Becky and sired by Imperial De L’ Ecluse, Kingston sold to Aucheneck Estates, Killearn, Stirling.

Selling at 4,000gns was the youngest in the sale, the striking Tiplady’s Lexi from Richard Tiplady, Langleydale, Barnard Castle.

This June-born heifer out of Bedgebury Glamourous and sired by Tweeddale Ironman, who Richard purchased for 14,000gns in May 2015 had been second in her class to the top price Abington Liquorice at the pre-sale show.

She was purchased by SG Benson to join his son, Matthew’s Mewstone herd based near Ulverston.