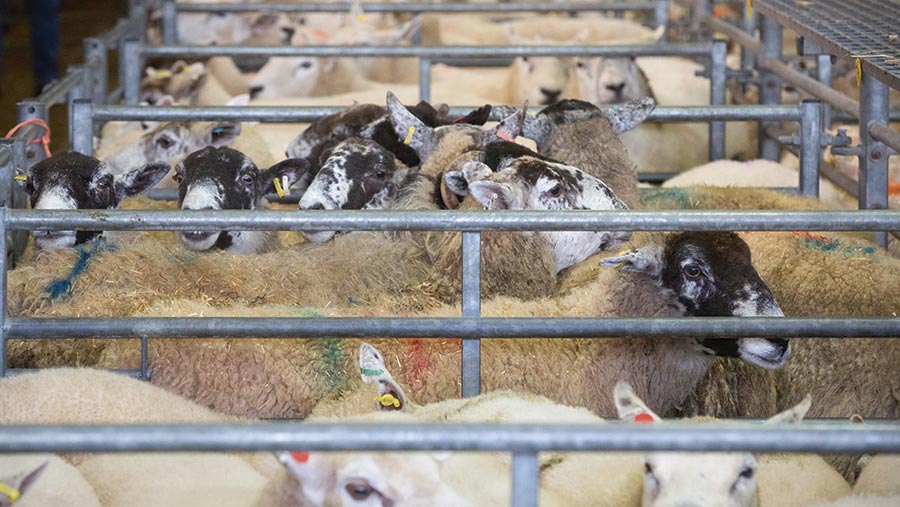 Strong cast ewe prices have met resistance from buyers, leading auctioneers to fear that trade has hit a ceiling.

Prices are £20 or more up on the year for cull sheep across UK marts, with lowland sections seeing £100 averages and the very best of the heaviest ewes passing £190 a head at some centres.

Tight supplies are supporting a flying trade. GB mart throughputs have been back 20% on the year so far in 2020.

This is certainly the case at Longtown, where numbers are tighter, with mart reports showing throughputs 30-39% back this January compared with the previous two years at an average entry of 2,542 head.

Heavy pedigree terminal ewes have been selling to £180 and £190 and the heavy section has averaged £101 this new year.

“Farms culled quite a lot of ewes last year and then in August/September time ewes weaned much fitter because it was a better summer, meaning more were sold earlier,” said Nick Woodmass, auctioneer at C&D Auction Marts.

“When people typically buy feeding ewes in August to October, they weren’t really around to buy and there weren’t as many ewes around to feed. Good scanning this time has meant fewer empty ewes as well.”

Mr Woodmass said he did not think buyers could give any more, so a bit of price resistance was likely to be seen.

Trade was back on the week at Skipton for an entry of 505 cull ewes, rams and goats, but was still historically strong.

Auctioneer Ted Ogden of Craven Cattle Marts said he was starting to see resistance from buyers, indicating a market top had been reached.

Mid-road ewes were hitting £70-£90, with buyers after meaty but lean ewes.

Mr Ogden noted that Defra sheep and ram slaughter figures were up 6% to 1.7 million head in 2019, indicating that supplies could be tight in 2020.