Cloughhead genetics took the headlines at the spring sale of Limousin cattle at Carlisle on Saturday (16 February) with a top call of 50,000gns.

Four more bulls were sold on the year, with a total of 108 bulls sold at a 76% clearance, yielding 15 five-figure bids and a strong commercial enquiry, with 52 lots making 5,000gns or more.

Trade didn’t reach last year’s highs of 65,000gns for Aultside Meanmachine, which was followed at 30,000gns by Gunerfleet Mongo, but the British Limousin Cattle Society said it was pleased with the trade given the cautious and uncertain backdrop.

Trade topped with Cloughhead Neville from local breeders Tom and Phil Hutton, who run 80 cows at Setmabanning, Threlkeld. He was knocked down to Paul and Christine Tippetts across the 40 cows in the Wilodge and Hackney herds, Shifnal, Shropshire.

Neville features French breeding, being a naturally born son of Gultime, a sire imported in 2012 that also sired the 18,000gns Cloughhead Jerry. He is out of Wilodge Cerberus daughter Cloughhead Hogmanay. 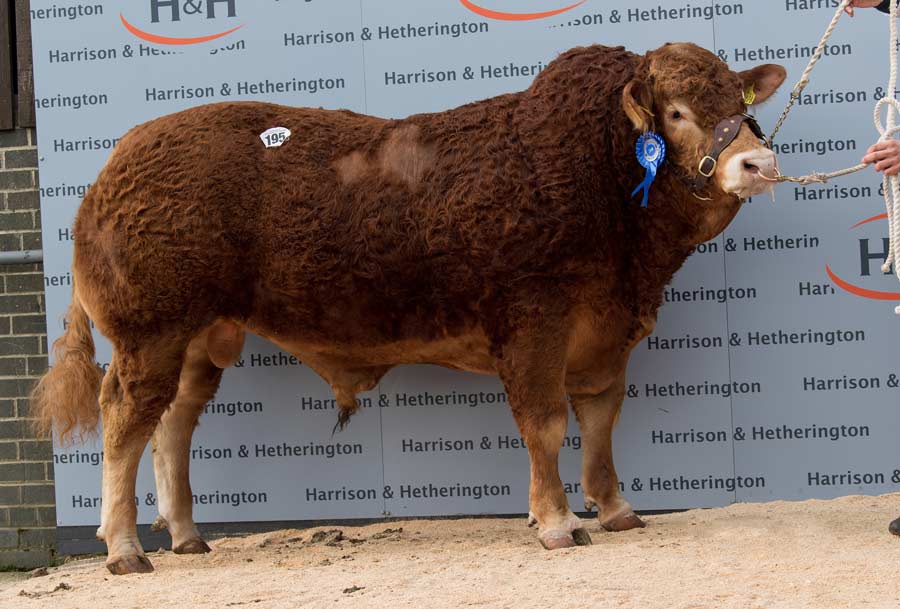 Next at 17,000gns was Gunnerfleet Next from Ian Handley, Chapel-le-Dale, Lancashire, with a winning bid from Jimmy and Donald MacGregor, Dyke herd, Milton of Campsie.

This is a son of the 24,000gns Ballinloan Jaegerbomb, a sire that averaged 11,500gns with his first five sons. He is out of Gunnerfleet Eros daughter Jelomie. 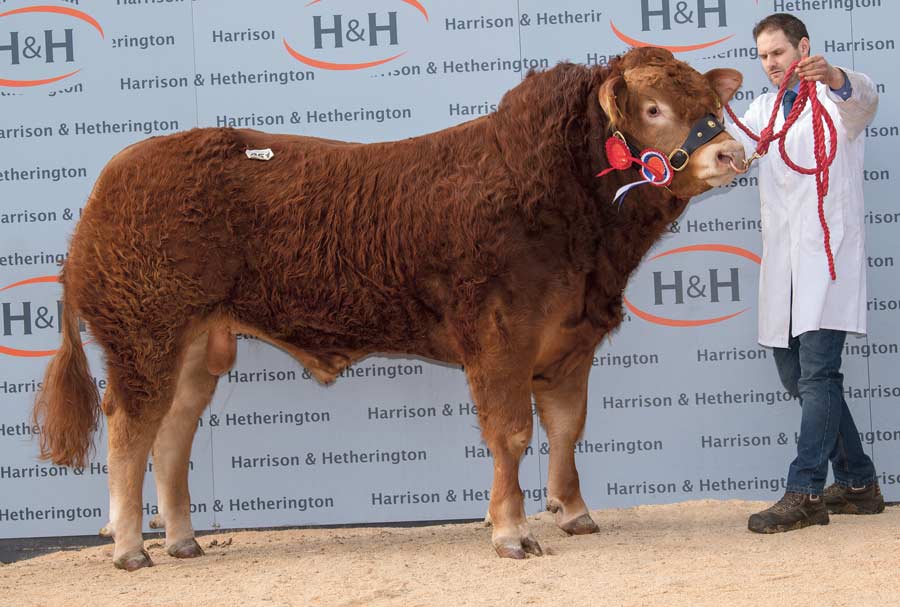 Gunnerfleet Next from Ian Handley made 17,000gns © Wayne Hutchinson

A brace of bulls made 16,000gns for Bruce Goldie, Mouswald, Dumfries, who averaged £13,388 overall for four sold on the day. First at this money was Goldies Novelty, who caught the eye of Neil and Stuart Barclay of the Harestone herd, Crathes, Banchory. 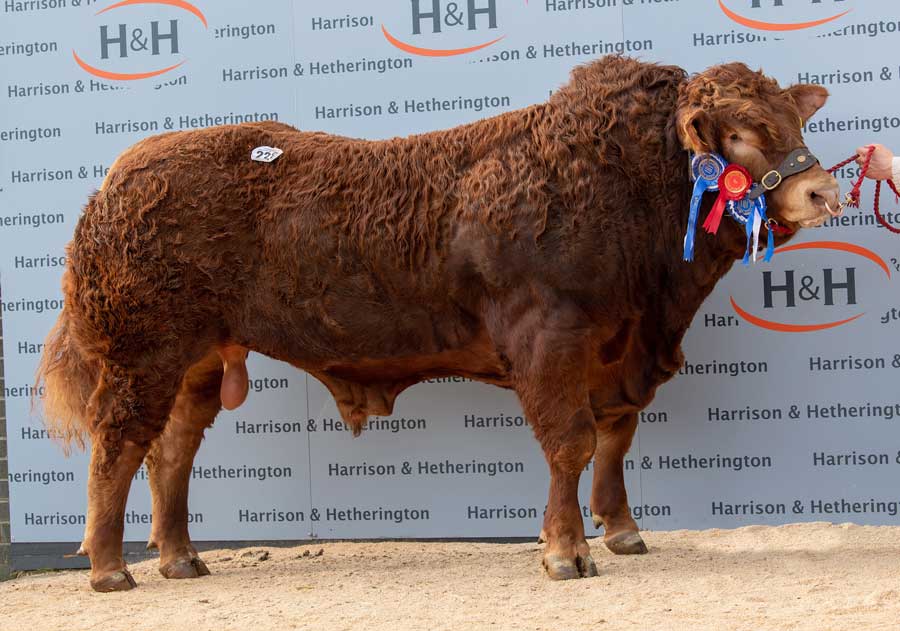 Novelty is by Ampertaine Gigolo, sire of the famous 140,000gns Trueman Jagger and is a September 2017-born son of Wilodge Cerberus daughter Goldies Goldilocks.

Goldies Nelson also hit 16,000gns, this time selling to Messrs Lear, Aylesbury, Buckinghamshire. This one is by Gigolo son Goldies Juggler and is out of Ampertaine Commander daughter Goldies Iona. 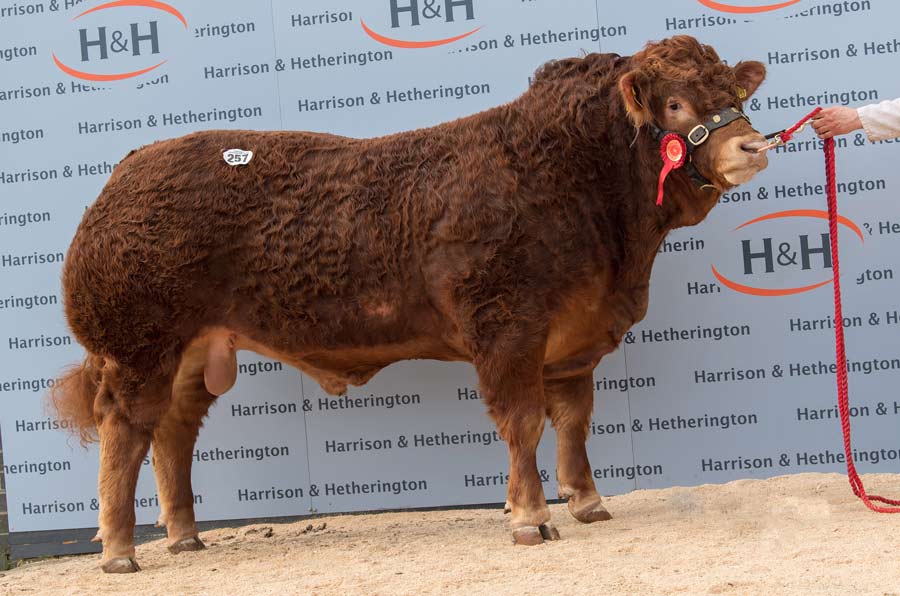 Goldies Nelson was the second of a Bruce Goldie Brace to hit 16,000gns © Wayne Hutchinson

Both sires were by Mas Du Clo son Dinmore Immense and out of Wilodge Vantastic dam Brockhurst Holy.

At 12,500gns was Huntershall Nando, another by Ballinloan Jaegerbomb. Nando is from Stephen Nixon, Southerfield, Wigton, and was knocked down to Messrs Forster and Son, Hexham.

Nando is out of Requin-sired Huntershall Jiffy, a full sister to the 22,000gns Huntershall Geronimo.

In the female section trade hit 6,500gns for Grahams Nicky from R and J Graham, Bridge of Allan, Stirling, with a winning bid coming from Messrs MacParlim, Newry, Northern Ireland. She is out of Millington Vascular daughter Grahams Coffee and by Loosebeare Fantastic son Foxhillfarm Jasper.

Ian Handley was in the money again at 6,000gns, this time with his herd’s favourite heifer Gunnerfleet Nigen, a Ballinloan Jaegerbomb daughter out of Dolcorsllwyn Brynmore daughter Gunnerfleet Imogen. She was knocked down to Messrs Barclay, Crathes, Aberdeenshire, who bought several much-fancied female lots on the day.