Strong bidding from across the British Isles saw a top of 7,200gns at the dispersal of the Tutbury Charolais herd at Welshpool on Wednesday (13 September).

A tremendous entry of show winner and cow-calf outfits level at £3,085.32 as JD Leavesley’s two-year-old herd from Burton-upon-Trent, Staffordshire, went under the hammer after the farm made a decision to go down the commercial route.

Topping the trade was Newroddige Jody, sold as a split low with her heifer calf Tutbury Matilda. Jody knocked down to J Conn, Strabone, Co Tyrone, while daughter of French-bred bull Unico SC was knocked down to AJR Farms, Ellon, Aberdeenshire.

Jody is one of many Newroddige dams purchased when Mr Leavesley bought the majority on Danny Williy’s herd two years ago. She is by the 30,000gns Balmyle Bollinger and traces back to Derryharney Outstanding. 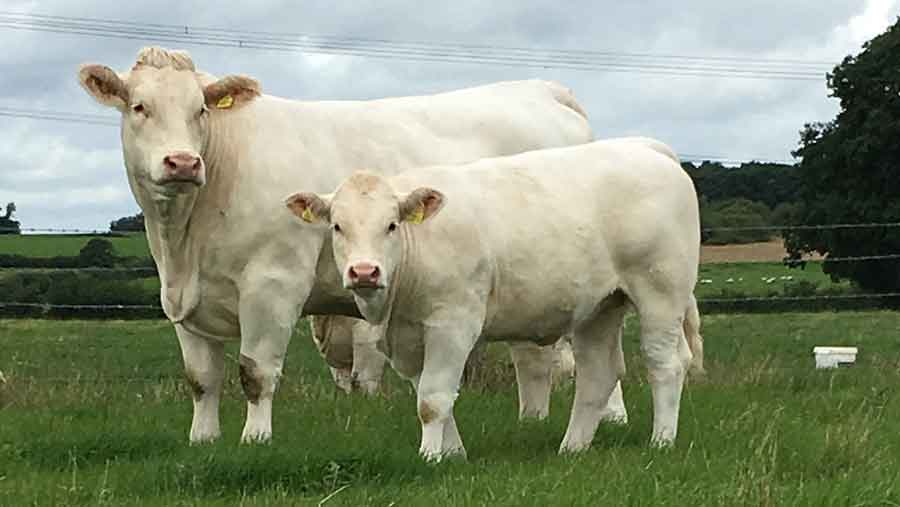 Next at 5,200gns was Newrodige Jewful, an April-2014 born daughter of AI sire Alwent Goldbar and out of Newroddige Graceful, who traces back to Maerdy Estyn. She sold to Welsh bidders MA and V Roberts, Botwnnog, Gwynedd, with her eight-month-old bull calf, another Unico SC son, Tutbury Navigator.

Then, for a combined 4,300gns, were Newroddige Jazmin and her eight-month-old heifer calf Tutbury Noella, who is another Unico SC daughter.

Noella also went home with AJR Farms, Aberdeenshire, while Jazmin was knocked down to AK Watkins, Kentchurch, Herefordshire. She is by Oldstone Edgbert and out of Three Counties Champion Thrunton Versailles.

Two outfits then made 3,700gns, the first being Newroddige Isabelle, which was knocked down to BJ Mould, Dunston, Staffordshire, and September-born heifer calf Tutbury Marybelle, which was bought by ER Hollingsworth, Middleton, Manchester.

Isabelle is by the 30,000gns Dingle Hofmeister and out of Newroddige Aquila, who is by the 15,000gs Carlisle supreme champion Burradon Talisman.

Also at 3,700gns was Newroddige Ferris, a 2010-born twin which was snapped up by P Weston, Ashbourne, Derbyshire. She is by Gretnahouse Archangel and sold served to Elrick Legend.

Her calf Tutbury Melissa, another Unico SC daughter was knocked down to Charlotte Boden, Bostock, Cheshire.

Two outfits then made 3,300gns. First was Alwent Goldbar daughter Newroddige Jessica and heifer calf Tutbury Nikita, another Unico SC daughter. Jessica was knocked down to DP, and M Jones, Minsterley, Shropshire, and Nikita was knocked down to T Rich, Mold, Flintshire. 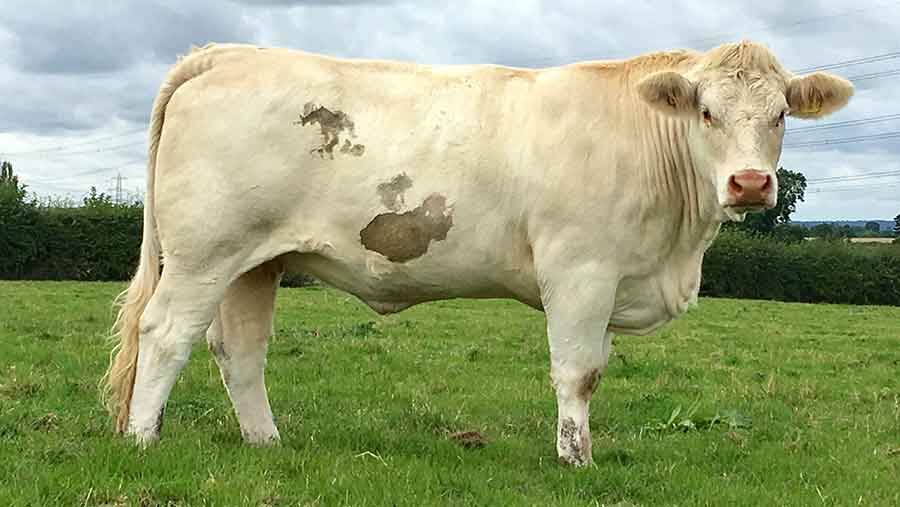 AJR Farms were back in the bidding for the top heifers at 2,500gns and 2,100gns. The lead heifer was in calf to Balthayock Impression, with the heifer at 2,100gns sired by Esgob Ferrari.