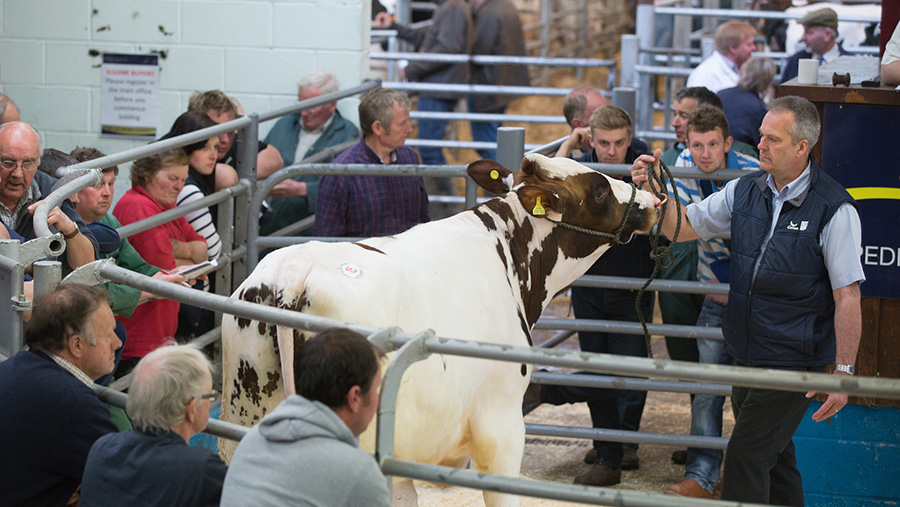 Improving milk prices is resulting in a strong dairy trade for freshly calved heifers at marts across the country, with buyer’s eager to secure good milking genetics.

Auctioneer Gwilym Richards said trade at the November sale of dairy cattle at Ross-on-Wye market was “the best trade this year by far” with a total clearance witnessed.

Prices at Ross levelled at 2,280gns for a calved heifer from Brownswood Holsteins, Worcester, with others from the same home making 2,080gns and 1,750gns, averaging £2,070 for the three.

Mark and Ben Stephens of Westbury-on-Severn, Gloucester, averaged £1,949.50 for their three calved heifers with a best of 1,900gns.

Sale leader was a second calver from the organic autumn-calving herd of Messrs BA Pyne and Son, East Budleigh.

Three hundred cattle were forward at last week’s Borderway monthly dairy sale at Carlisle with a pack ringside resulting in some buyers unable to get a view.

There were 53 buyers recorded from 17 counties with all the four home nations represented.

Trade topper was a young second-calve cow from JG and ME Harrington and Son Birds Hill Farm, Dalston.

This white stylish cow had a quality capacious mammary and sold for £1,950.

She was sired by Wyman from a dam with more than 10,000kgs twice.

William Lindsay from Seaton Hall, Bootle, Millom, sold 11 freshly calved cows and heifers and topped the sale at £1,900 for a super-uddered heifer sired by Bilsrow Oscar.

Also selling for £1,900 was a Bossman daughter consigned by WC and J Leak and Sons, Hill Farm, Holmrook.

She was bred from a super Bluesky dam with butterfat more than 4.5%.

The Davidson family from Errolston Farm, Gretna sold six cows and heifers to average £1,626 and topped at £1,800 for a heifer by Monument Impression giving 34kg.