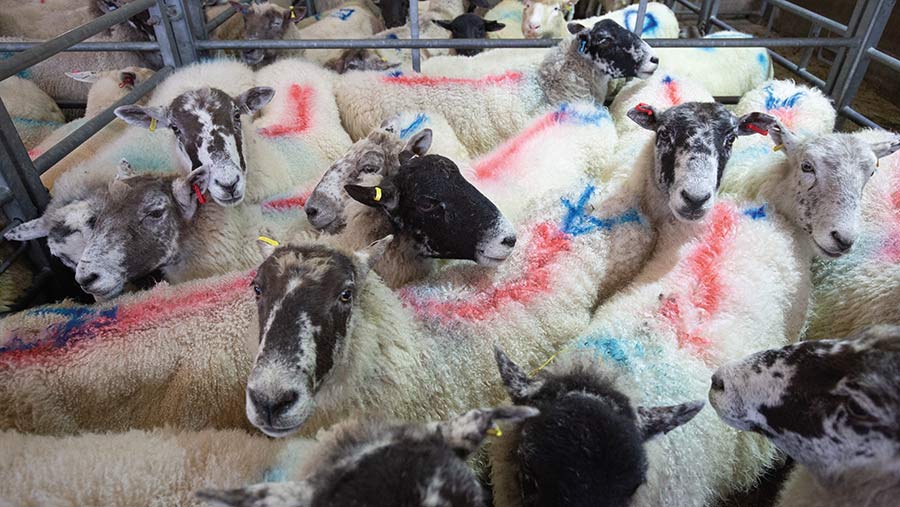 Cull ewe values are up and lambs have lost £6-£7 a head this year as the ethnic trade drives mutton demand and lambs have seen limited interest from wholesalers and caterers.

The average cull ewe price (for England and Wales) has lifted £12 a head since January, according to the Livestock Auctioneers Association. Ewe prices typically start increasing in March as flocks lamb, and supply tightens before prices peak in late spring or summer, depending on the timing of religious festivals.

Last week’s lamb SQQ was 257p/kg, which was 16p/kg back on the year, despite supply being tighter.

See also: How Yorkshire farm is using EID to find most productive ewes

Conversations around cull ewe marketing ahead of Ramadan (2 April-2 May) should start sooner rather than later this year, said John Walton, sheep auctioneer at Longtown for C and D Marts.

“We expect buyers to start lairaging ewes earlier this year so farmers should get in touch with their sheep auctioneers and plan marketing strategies,” he said.

“Ramadan is a fasting time, but large meals are had at night, and very often the meat of choice for feasting on is mutton.”

One of Truro’s strongest ever cull ewe sales was reported by Ross Collins and the Lodge and Thomas team last week (2 March).

“Heading up to Ramadan seems to have pushed the trade on,” said Mr Collins. “It’s been largely dry and apart from some stormy weather recently, it’s been helpful for farmers.”

“It’s noticeable how many more people are tendering for grass keep. Perhaps the decision has been to take on more ground rather than buy fertiliser at high prices.”